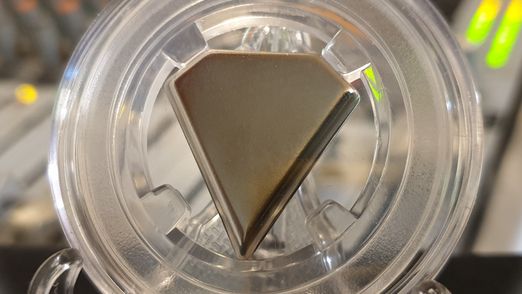 In recent years we’ve seen multi-FX move from pedalboards to amps, guitars and phones – and now a Kickstarter campaign promises to produce a multi-FX choice.

The X-Pick is described less as a guitar pick and more like “a remote control for your pickups”, using powerful magnetic fields to interact with your guitar’s strings and pickups.

It is constructed with a neodymium magnet which opens up a number of interesting playing and noise creation techniques, whether playing directly on the strings or simply manipulating the magnetic field from a distance (up to a maximum of 20 cm).

By doing so, X-Pick says you can use the technology to create a whole range of different sounds, including endless sustain, slide and wah-like sounds, delay, tremolo and even EBow-esque noises.

There is also an octave type sound, which can be created by playing the strings above the pickups, allowing you to gain more than an octave on each string.

Many of them work very differently from their pedalboard equivalents and are not meant to replace traditional effects, but work in tandem with them to create some interesting results.

For example, the time limit is not “set and forgotten”. Instead, it depends on the player alternating the strumming or selecting the strings, creating each “echo” with an airy strumming.

Pledges start at €36 (around $38), so while that’s pricey for a pick, we feel it’s low enough to warrant an experimental punt for many players.

As of this writing, the project – led by Italian musician and scientist Marsio Salcuni – has 23 days to go and has already reached more than 50% of its goal.

Head to the X-Pick start page for more information.