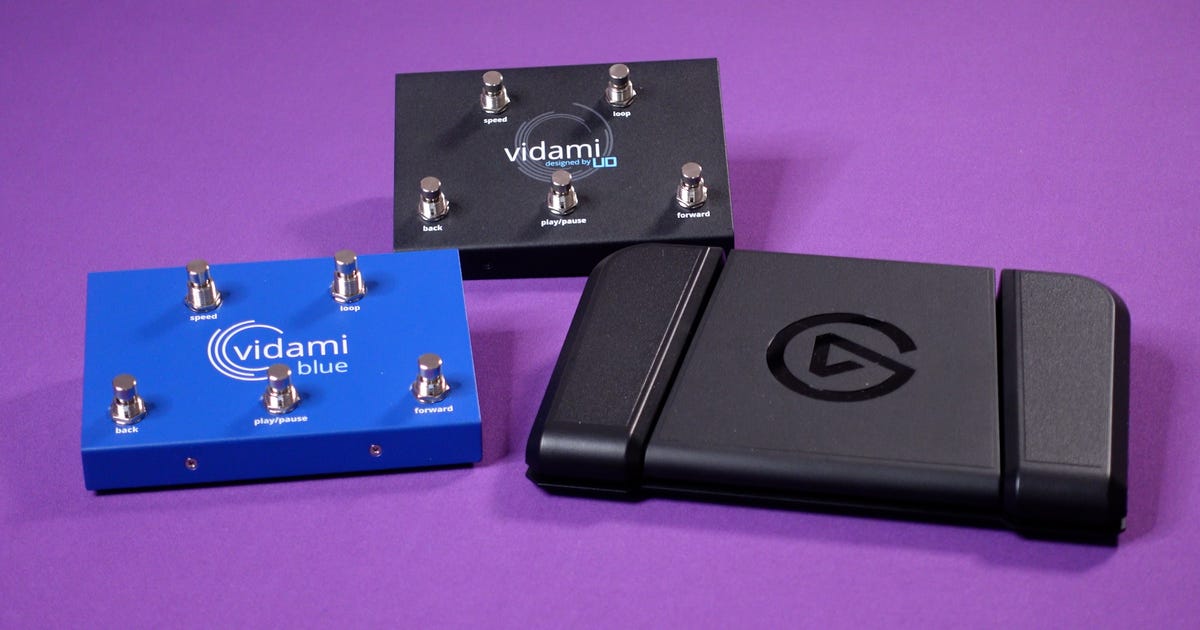 Vidami and Elgato pedals make it easy to learn the guitar

You can learn to do just about anything by watching videos online. Or should I say, you can find videos online claiming to teach you almost everything. Whether you can actually learn from each of them is debatable.

That being said, whether it’s cooking, home repairs, tech advice or, in my case, learning to play the guitar, the online courses available to you are endless.

When I got my first electric guitar last year, I turned to online lessons to learn how to play it. I started with Fender Play, which I had used before when I was trying to learn the ukulele.

I also tried looking for free lessons on YouTube, and there are plenty of great beginner videos to get you started.

Regardless of platform, I kept running into frustrations due to having to take my hands off the guitar to navigate the video player I was using.

Soon after, I started seeing ads on Instagram for the Vidami, a pedal designed to solve this problem.

Vidami markets two different versions of the looper pedal: the Original Vidamiwhich connects to your computer via a USB cable, and the Vidami Bluewhich offers Bluetooth connectivity and additional features.

At its core, the USB version of the Vidami ($150) is designed to duplicate some of the keyboard functions you’d use to control a video player, but operate them with your foot instead of your hand. It works with YouTube in a Chrome or Safari browser, and with over 35 other music education platforms from teachers like Marty Music, Guitar Lessons 365, and Justin Guitar.

Vidami is designed to blend seamlessly with your other guitar pedals and features five knobs that look and work like the switches you’ll find on some of your favorite pedals.

These buttons control the play/pause, rewind, forward, speed and loop functions of your video player. Did you even know that you can loop part of a YouTube video to play it over and over again? I didn’t until I used this pedal.

So now you can press play on a video, follow the lesson, rewind and fast forward as needed, slow down, and even repeat sections, all without taking your hands off the fretboard or putting down your pick.

For many people, this may be enough to help you let go of the keyboard and get back to your instrument. But Vidami didn’t stop there.

The Vidami Blue costs $230 and has all the same features as the original Vidami pedal, but in a wireless package. Bluetooth allows you to connect not only to your laptop or desktop computer, but also to phones and tablets.

Plus, it supports sheet music apps and tab sites like OnSong and Ultimate Guitar Tabs so you can turn pages and scroll through songs hands-free.

There are even settings to help you record music. Vidami Blue supports many digital audio workstations, or DAWs, including GarageBand and Pro Tools. Configuration settings and button assignments for these various uses are available on the Vidami website.

For example, if I’m recording my guitar in GarageBand (though believe me, there’s not much point in recording everything I can play right now), I can set up and prepare my hands to play, press press play to start the pre-recorded drum track, then hit the record button for my sweet guitar part. Again, doing it all with my feet, leaving my hands free to shred.

Although the Vidami and Vidami Blue are the first pedals designed by a family of musicians to aid in learning the guitar or other instrument, they are not the first computer foot controllers on the market. There are a number of foot controllers for accessibility uses, transcription, MIDI instruments and more.

Coincidentally, around the same time I was contacting Vidami for demo units of its products, I saw that Elgato had announced a new product: the Stream Deck pedal.

As the name suggests, Elgato Stream Decks (not to be confused with steam bridge) are used by many streamers and gamers, as well as other types of video professionals. I have my own Stream Deck that I use when editing and streaming, so I knew how to customize the buttons to perform various functions.

Where Vidami has five buttons on its pedals, the Stream Deck Pedal ($90) only has three. You need a USB cable to connect to your computer, so it’s not as tidy as the Vidami Blue. I found the Elgato pedal design to be a little more comfortable to use and the large buttons were easier to find without looking. There’s also an option to install rubber bumpers if you want to use the big middle button as a footrest when you’re not pressing one of the outer buttons.

Within the Stream Deck software there are many built-in functions that you can assign to buttons, and a huge selection of plugins available for download. Although the pedal pairs well with a desktop Stream Deck, it can be used on its own. It turns out that the Stream Deck pedal can be configured to perform many of the same functions as the Vidami pedals, and many more.

I feel like these are the basic functions I would use most often, so if you’re not concerned with loops or speed controls, this might be all you need . I also found the larger pedals make it easier to find the button I’m looking for, compared to the Vidami’s smaller switches. And, when I’m not playing guitar, I can use the Stream Deck pedal when I’m editing for work as part of my video editing setup.

As you’ve probably figured out by now, these pedals could be used for more than just learning to play guitar. Since they’re already set up to control YouTube videos, you can use them for any type of tutorial, especially anything that requires you to use your hands.

One use I thought of was in the kitchen, when you’re trying to learn how to cook something, but don’t want to get your hands dirty all over your iPad or mouse. The Vidami Blue would be particularly useful here.

I also thought about getting into knitting. I could see it was really helpful to sit with my yarn in my lap and the needles in my hands while I navigate the YouTube player with my feet. Or, if you’re a craftsman and like to watch videos while you work, foot pedals can work for that, too.

I like having something on TV while I sew, something I can listen to even if I’m not paying attention to the screen. YouTube keyboard shortcuts also work for many other video players, such as Hulu, Netflix, and HBO Max. However, you will need to install the HBO Max/Go Shortcuts extension for the Chrome browser.

I already talked about all the plugins available for the Stream Deck pedal, but I also found a way to customize the Vidami pedals to be used for other things.

Karabiner-Elements is a keyboard customizer for Mac that lets you create your own shortcuts, and it can be used to assign new functionality to Vidami pedal buttons.

For example, many programs use the arrow keys on the keyboard to move forward and backward through everything you do. Using the Karabiner event viewer, I can see that the computer recognizes Vidami’s forward button as the closing parenthesis or the ]key.

Now these buttons on the Vidami will let you navigate through Keynote slides, Apple Music tracks, or just about anything you can find that uses the arrow keys. Karabiner can do a lot more than that, so check it out if you want to try more advanced shortcuts.