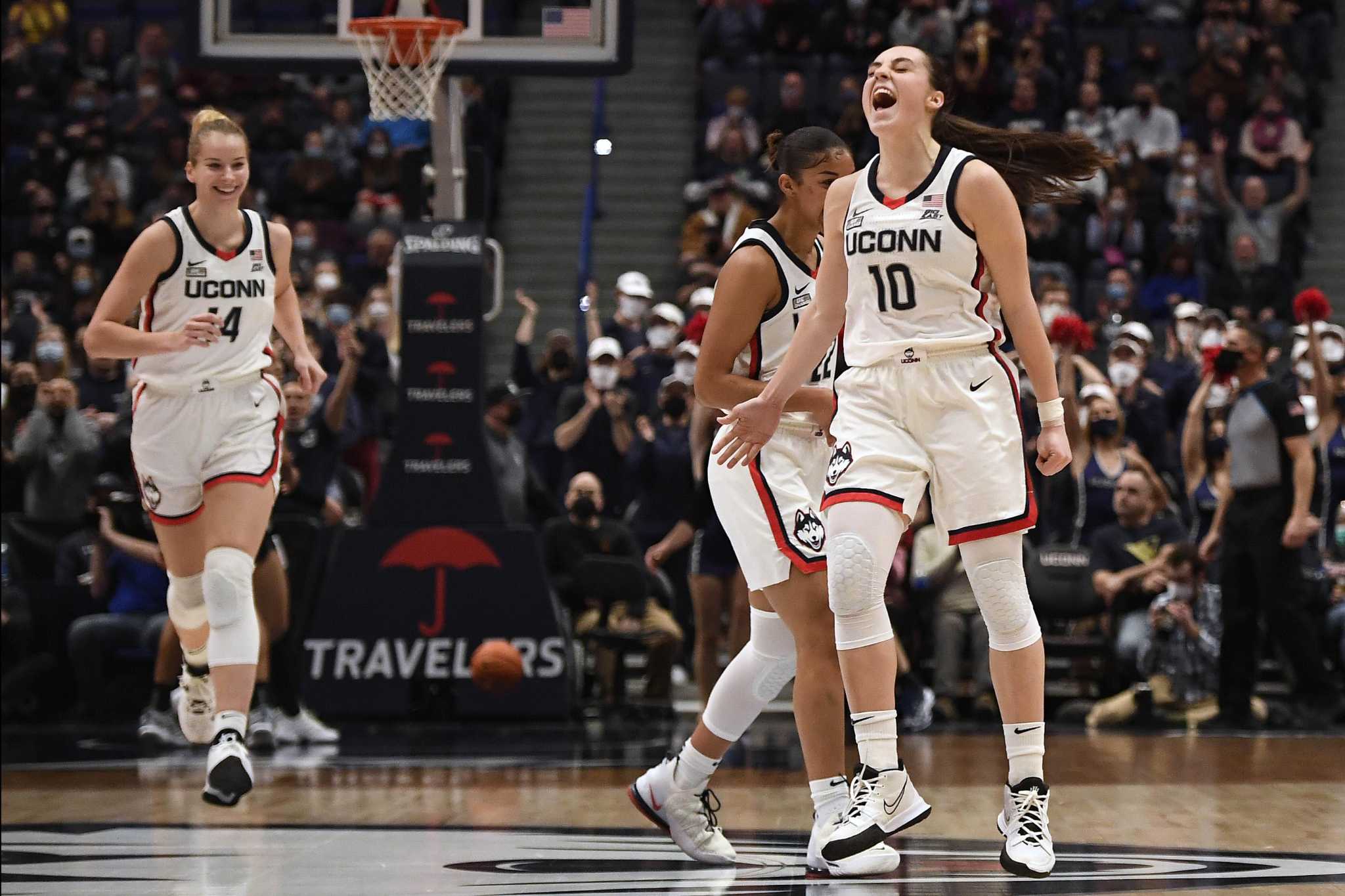 HARTFORD — Players of the UConn women’s basketball team were overwhelmed by fans Sunday afternoon after their 90-49 win over Georgetown. The crowd was so big that they started moving the press row tables along the front rows of the XL Center.

Young fans held up posters and t-shirts, begging for autographs and photos with the No. 10-ranked Huskies. One fan brought a homemade poster decorated with the Hungarian national flag for Dorka Juhász, while another took gave her shoe to Paige Bueckers to sign.

“Paige touched me! She touched my arm,” said a young girl in the crowd.

With just a week left in the regular season, UConn has a lot to celebrate. He has 10 players available after eight of his 12 players missed at least two games due to various injuries and illnesses over the past two months. The team is also just one win away from capturing its 20th regular season title in the Big East.

Yet he still remains without his best player.

While Bueckers participated in light shooting and dribbling during warmups without a knee pad, UConn coach Geno Auriemma said he doesn’t expect the second player to play this week. Bueckers joined the team for practice on Wednesday.

“There are really good days when she’s like, ‘I could play tomorrow,’ and then there are days when she’s reminded, ‘No, you can’t. There are more good days than bad days, but she won’t be playing this week,” Auriemma said. “What does the Big East Tournament look like? I do not know. We’ll see. I’ve said it before, when you come out of injury, the only person who knows when it’s time is the athlete themselves.

Without last year’s National Player of the Year, the Huskies continue to be led by senior Christyn Williams, who finished Sunday with a game-high 19 points, five assists, two rebounds and two steals in her fifth game. consecutive playing 30 minutes or more.

Azzi Fudd followed Williams with 12 points. Sophomore Nika Mühl came next with a season-high 11 points (including tying her career high with three 3-pointers), four rebounds, four assists and six steals, a career high. As a team, UConn (19-5, 13-1 Big East) finished with a season-high 21 interceptions. Sunday was the Huskies’ first meeting with Georgetown this season after the teams’ first meeting on Jan. 5 in Washington, D.C. was canceled due to COVID-19.

Mühl was UConn’s biggest spark against the Hoyas. The Croatian opened the game with a 3-point corner in less than 15 seconds. She attacked the defenders, releasing all the stray bullets and used her body to lead the Huskies’ assault.

Immediately after the game’s first timeout, Mühl grabbed two offensive rebounds before making a steal and score play. A quarter later, she made a no-look pass wide of the field to Williams, who made the driving layup to put UConn up 43-17. But it was his assist to rookie Amari DeBerry at 5:59 in the fourth quarter that impressed Auriemma the most.

While Mühl could have taken the layup for herself, the second instead fed the ball to DeBerry, who scored her first points of the game. DeBerry had assisted Mühl in a 3-pointer two minutes earlier.

“I think Nika is very embarrassed to pass the ball to people; it makes her feel good,” Auriemma said. “One of the things Nika always said when we signed her is that when you score you’re happy and when you get an assist two people are happy: you and the guy you’re scoring it for. you gave. And she lives it everyday. She lives for it. I’m not surprised she did. I knew she was going to give it to one of these two guys (DeBerry and Piath Gabriel ) and I’m glad she picked Amari. And I’m glad Amari made the lay-up.

Despite the return of Olivia Nelson-Ododa and Caroline Ducharme, Auriemma opted to pitch Juhász, Mühl, Williams, Fudd and Aaliyah Edwards for the fourth game in a row.

“With Liv and Caroline out, I thought we were starting to get into a pretty good rhythm,” Auriemma said. “We started to find a really good rhythm and I thought, ‘Why not just keep it as long as possible?’ If that ever changes, then I’ll change it.


With all but one player back (Aubrey Griffin won’t play this season due to back surgery in January), UConn’s final three regular season games this week will give Auriemma plenty of time to play with the better formations and player compatibility. The Hall of Fame coach has used nine rosters this season due to so many player absences.

Despite a slow start in the opening minutes, UConn stifled the Hoyas (7-17, 2-14) on both ends of the court. A 12-0 first quarter lead gave the Huskies a double-digit lead. UConn finished second with a 19-2 run for a 26-point advantage at halftime.

By intermission, UConn had already had a season-high 16 interceptions and had 18 points on Georgetown’s 19 turnovers.

“When we’re good, it’s validation that when we’re good, we’re really, really good,” Auriemma said. “We can be explosive in transition, we can be really good defensively and we can be good in half-court, and now we’re just trying to squeeze 40 minutes out of it. I know it’s hard like when you get a big lead, but just try to form good habits.

Georgetown had no response slowing UConn down in the past two quarters, as demonstrated when Williams took out a Hoyas defender on his way to the basket.

“Oh my god,” Williams said before laughing. “I didn’t know she went down like that. I was just focusing on the lay-up. … It was crazy. I’m sorry for the girl I met. … It was just shocking.

In the final four minutes, all 10 available Huskies had played. Each finished with at least seven points. When DeBerry (seven points, one rebound, one assist in seven minutes) drained a 3-pointer with at 3:29 in the fourth, the entire UConn bench jumped for joy — including Bueckers with the air guitar.

The Huskies will play their last three regular season games this week at home. UConn’s next two games (Wednesday against Marquette at 7 p.m. and Friday against St. John’s at 7 p.m.) will be played at the XL Center, while the senior day is at Storrs on Sunday against Providence.