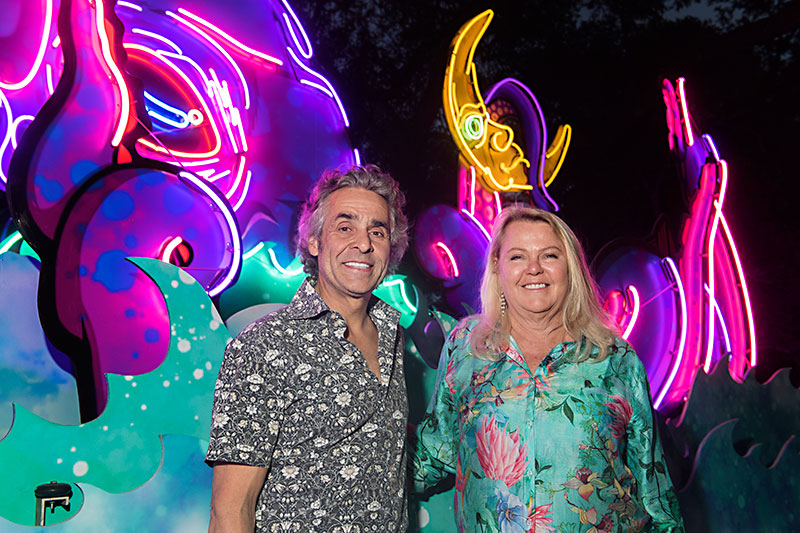 No one else could have done this.

Nobody else in Austin, at least, and probably nobody else in Texas: supercharging the verdant acres of the Zilker Botanical Garden for six nights with more than 100 fantastic works of neon art, works of technical and artistic creativity if huge (some of them) and so extraordinary (all of them) that the familiar place turns into a wonderland of glass and illuminated gas and steel, often kinetic, often interactive and wow.

They are the people of Ion Art. It’s the husband and wife team of Greg and Sharon Keshishian, who started the Austin business in 1986 with the intention of creating and selling neon art, and now employ around 40 people – all artisans, and deeply invested in integrating the company’s varied activities. visions in sight – to make this city even brighter. 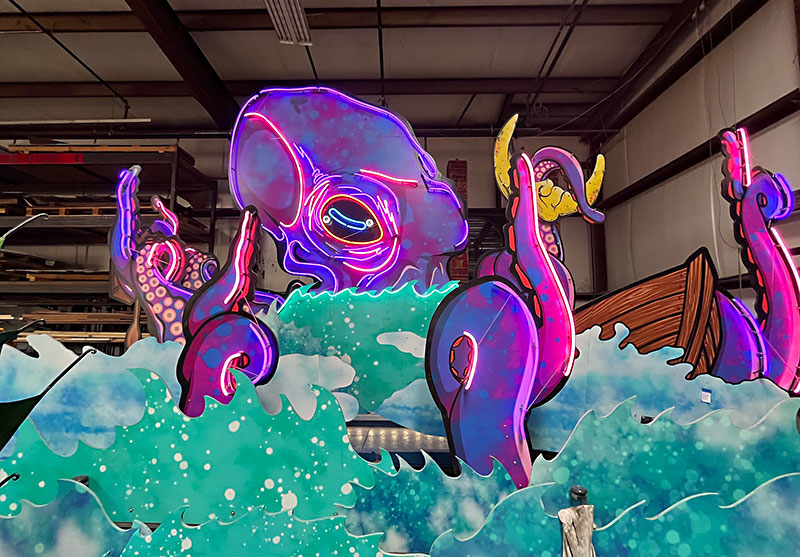 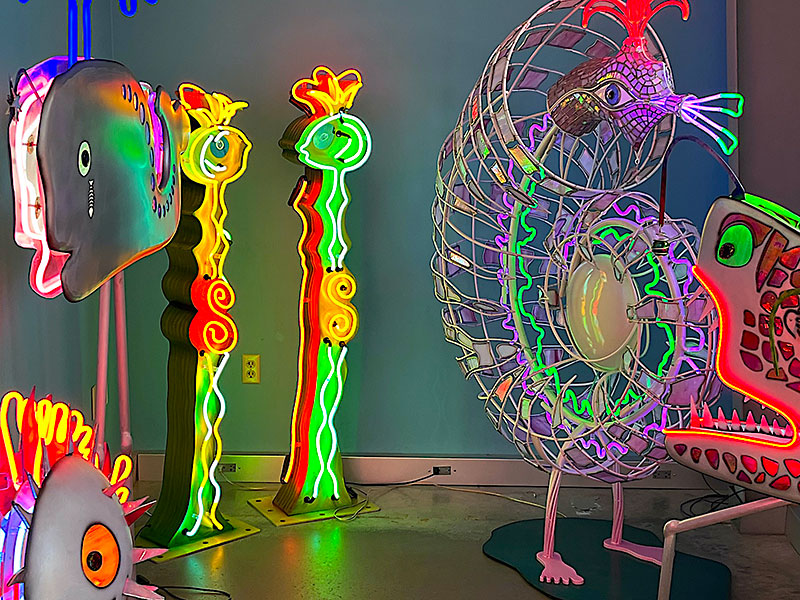 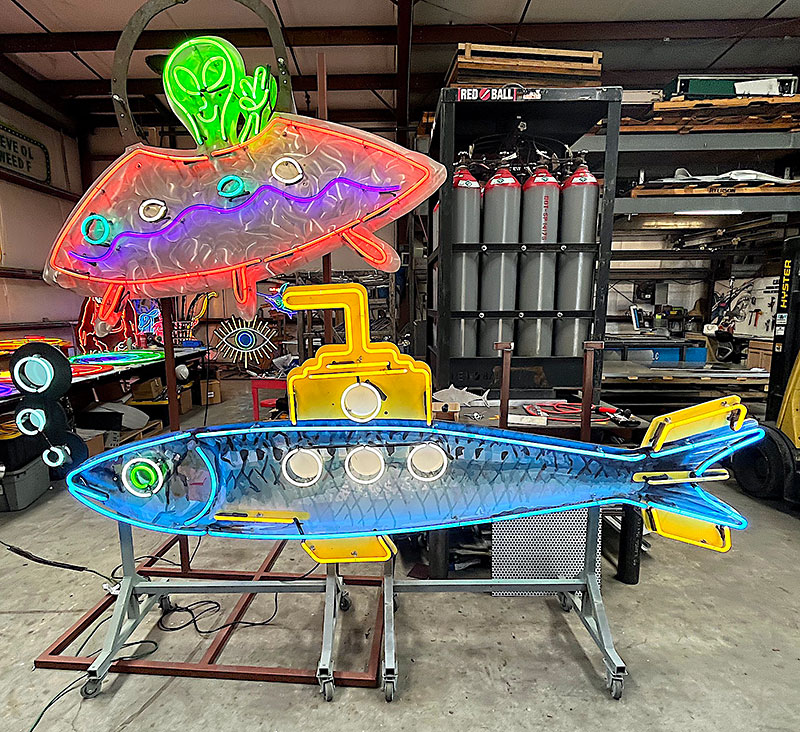 “I started doing stained glass before I did neon,” says Sharon Keshishian, strands of blonde hair flickering in the wind blowing across Ion Art’s 6-acre resort in South Austin. “I’ve always done art, and when I was doing stained glass, I started going to Houston, because I heard about guys there who were doing neon. And I started going to have neon pieces made to go with my drink. And then Manuel’s on Congress asked me, ages ago, if I could make neon for their restaurant – and that was my first neon ad.”

There’s always: before our sleepy college town turned into the kind of 24/7 tech-bro carnival it is today. But now, of the parts of Austin that remain worthy of our love: who made that eye-catching sign for Stubb’s BBQ on the Red River? Ionic art. Who made these signs for Maudie’s Tex-Mex, The Broken Spoke, El Chilito, Emmer & Rye, Stiles Switch, Oilcan Harry’s and (ahem) The Austin Chronicle? Ionic art. Who built this illuminated LCD guitar for the popular music festival? The Rainbow Cowboy for Art in Public Places in Ninth and Colorado? The huge Playboy bunny head that galvanizes the darkest nights of the Marfa desert? The polychrome ATX, eminently climbable in front of the flagship of Whole Foods at Sixth and Lamar?

It was all Ion Art, but it wasn’t just Sharon. “Greg does all the metal work,” she says. “Our talents really complement each other and together we can build anything.” 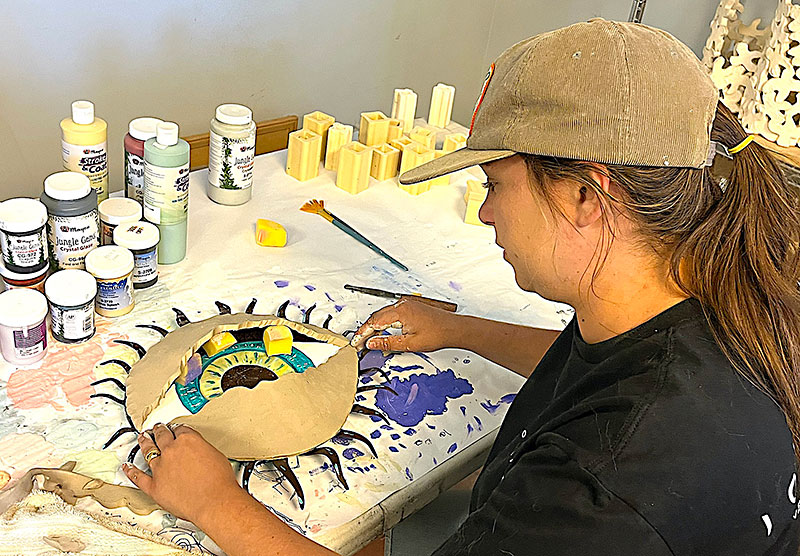 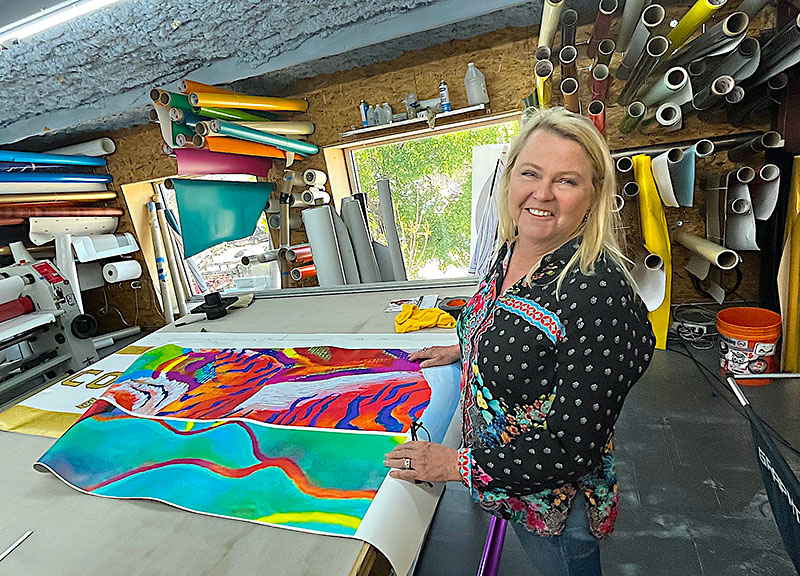 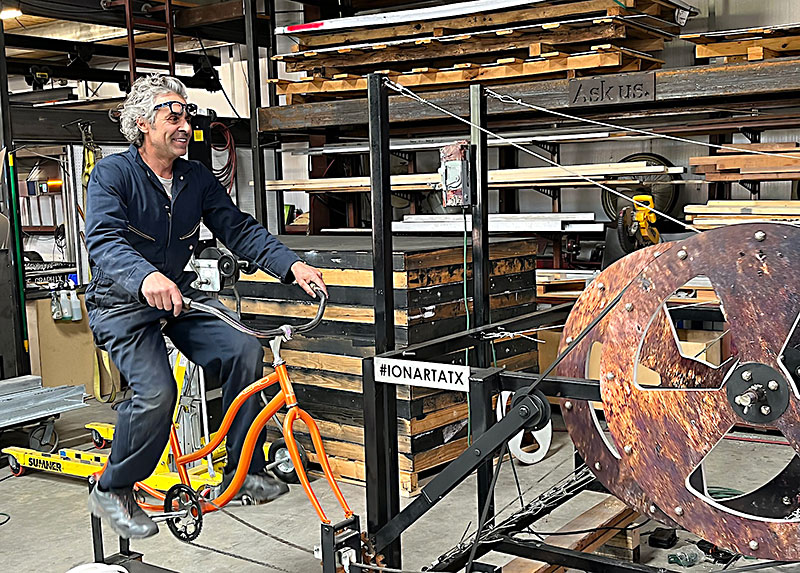 “I do mechanical stuff,” confirms Greg Keshishian, smiling as he climbs onto a stationary bike attached to a chain-linked gear that will rhythmically move yards and yards of wood sculpted and painted to look like layers of ocean waves. “Sharon is the main creative force and artist,” he says, “and I’m kind of the guy who has the workings of the trade.

“But it’s not just the two of us,” Greg added, pointing to the main warehouse which is full of dark machines and the craftsmen who use them. “We’ve been doing this for years and we still have a ton of talented people working here.” He begins to pedal; the wooden waves undulate past a cephalopod behemoth that has risen in sprawling glory.

“I don’t know if you know this old Baron Munchausen movie,” Sharon says, “but they had that octopus scene with the waves coming and going? So I asked Greg if he thought we could build one for the Zilker install. And now, ‘she gestures towards the huge contraption. ‘People can pedal it around the garden – and you can take the stage for pictures! 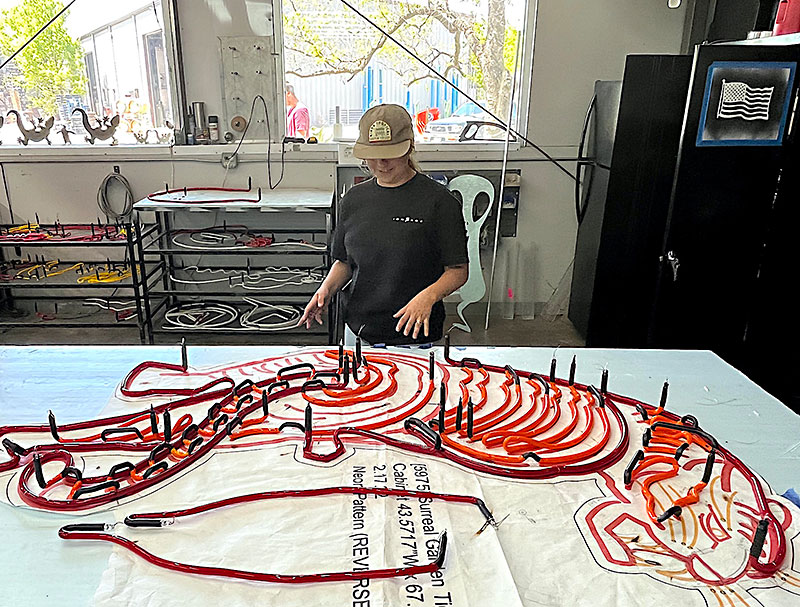 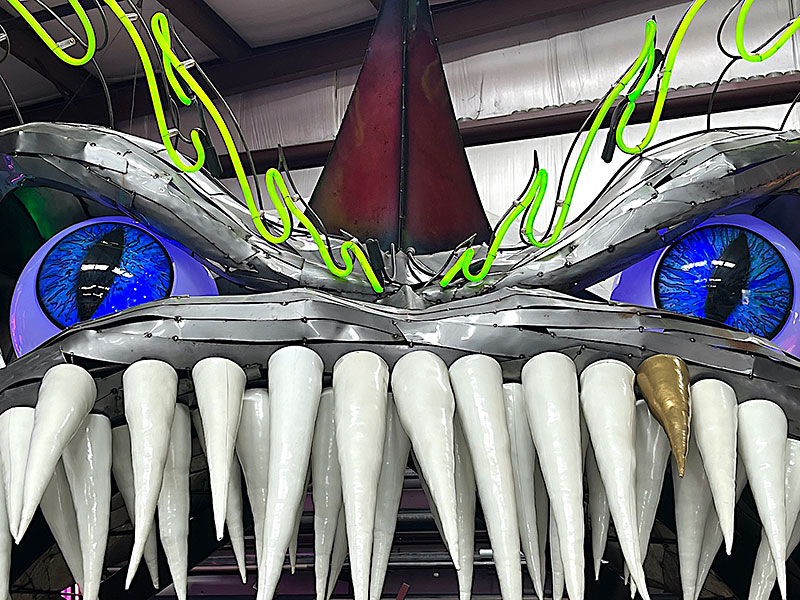 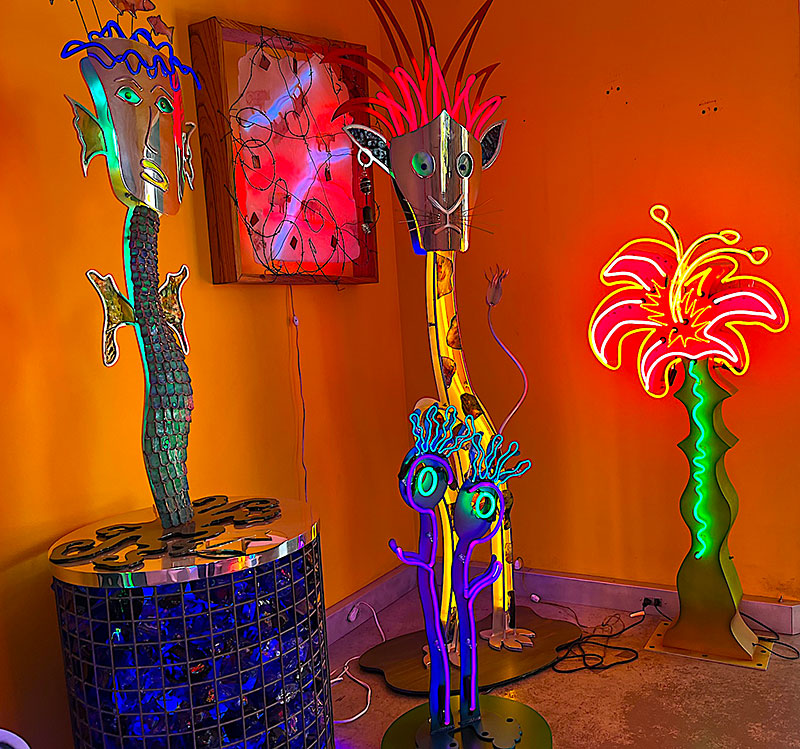 But that might not be the most impressive thing you’ll see at the Zilker Botanical Garden when Ion Art’s “Surreal Garden” is fully installed and open to the public on April 22. There will be a trio of interactive pendulums, the upper parts of which will be cast in neon to resemble stellar phenomena in the night sky. “They have these big counterweights,” Greg explains, “so people can push them and they’ll swing on their own for a long time. You won’t see their rods at night – it’ll look like meteorites coming back and forth, and they’ll swing will swing above the dancing cages.”

There’s also a Brobdingnagian sea monster, a bright, glowing anglerfish that’s large enough to wander around inside; the fish is equipped with smoke emitters and LEDs, a single good tooth shining from its rows of razor-like (but gently vinyl) teething. There is an intricately arched Stargate that will serve as the entrance to the Primeval Forest. There’s… a rotating tall mast with neon fireflies? 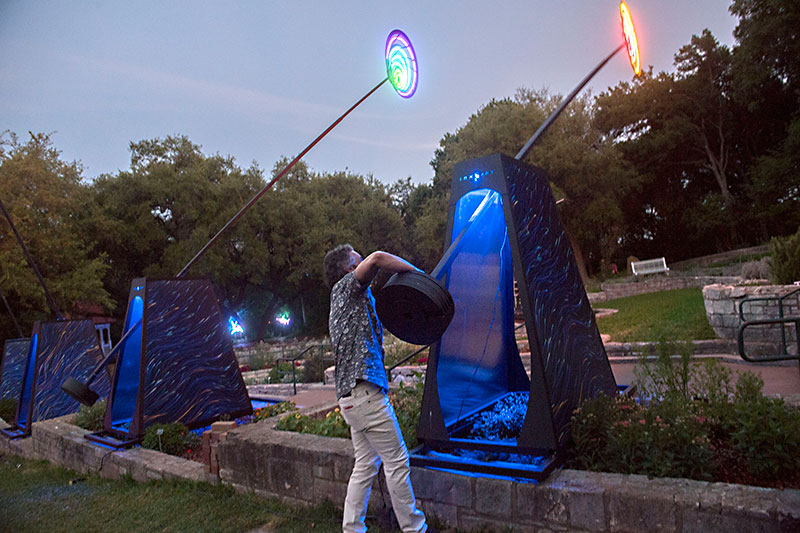 “Sharon is the main creative force and artist, and I’m kind of the cogs guy.” – Greg Keshishian

“All six turn on and off independently of each other,” Greg explains, adjusting one of the large insects’ wings, “so it will look really realistic – like a real flock of fireflies.”

But even this neon project — like any endeavor that requires planning and effort — isn’t all soft and light. “We have to rent equipment to walk around the garden,” Sharon explains. “Our usual crane can’t fit in the space, so we have to get smaller lifting components. We’ll have about five days to install everything. Art Seen Alliance does all of our staging – every year they’ve been l “one of our biggest pro bono helpers. They’ll set up the stage that we’ll put the octopus on. And we’ll have to put everything in a certain order, so some don’t block the others. The octopus has to be one of the first things, but the sea monster, where it’s going, we have to put other things first – like the stargate – first And the meteors and all the smaller, self-contained parts – we’re trying always to understand the logistics of it all.” 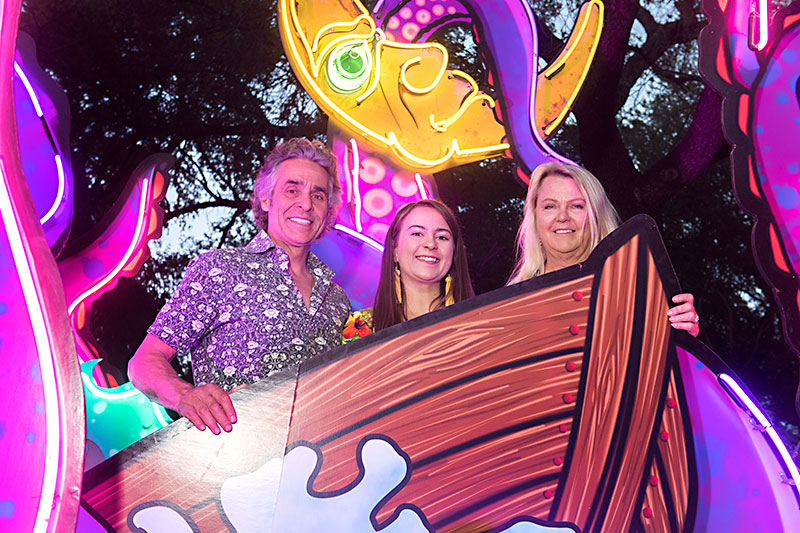 But they’ll find out in time for the celebration in the garden, you can be sure: experience is, after all, one of the best teachers there is. Ion Art held its first such party in the sprawling parking lot outside its headquarters in 2017, which drew around 1,000 intrigued Austinites. By the time of their third, in 2019, attendance had grown to 4,000 and the space didn’t seem as big anymore.

“At that time, we were overwhelmed,” Sharon says. “But some people from the Zilker Botanical Garden were here, and they thought it would be great for the garden. So we were going to try to do that in 2020, and, well, you know what happened then. So this party has been postponed for two years and we are all super excited that it will finally happen.”