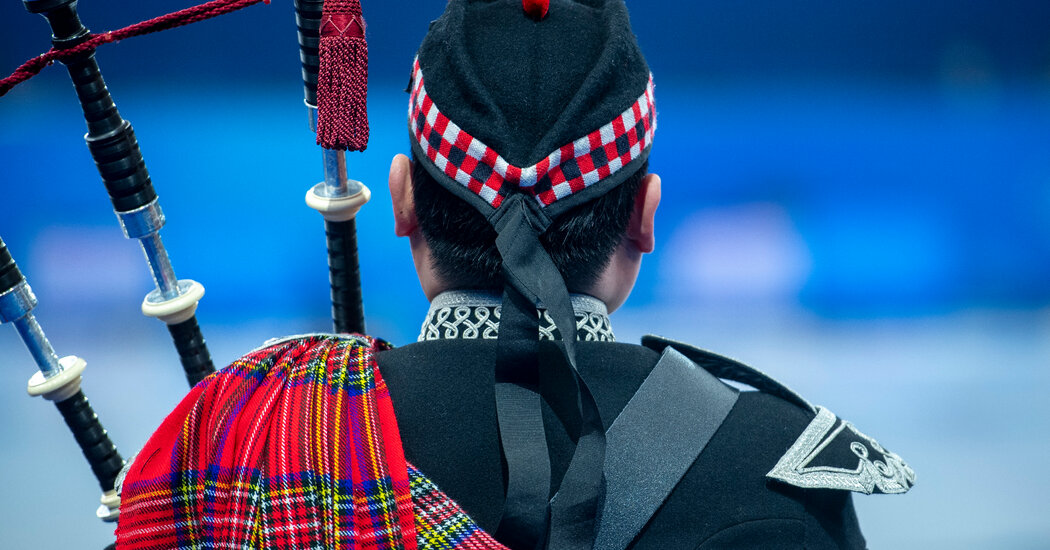 The Scottish Curling soundtrack, delivered by pipers from Beijing

BEIJING — The curling arena went dark and strobe lights cleared the ice. A band of pipers marched by almost like a vision from another time, or at the very least, another continent.

The musicians describe themselves as amateurs, mainly from Beijing. None of them have ever been to Scotland. But they were dressed as if they had just arrived from the Highlands: red-checked kilts decorated with small pockets with long tufts of horsehair called sporrans, part of the uniform they had ordered abroad.

The constant shout of ‘Scotland the Brave’ withstood the din of the arena – the selection is undoubtedly a nod to curling’s Scottish roots. But the anthem is also a sort of default melody for the instrument; instructional videos on how to play were easy to find online. And the group needed this help since their teacher, the only one they could find in China, had recently left the country.

“We just love the bagpipes,” piper leader Zhang A Li said after one of their pre-game performances – a staple of curling tournaments, whether in China or Chicago. , “and we all came together.”

That, in itself, is something of a miracle.

In a way, the formation of the group reflects the sprawling challenge faced by Chinese officials in staging the Winter Olympics in a country unfamiliar with the events that would unfold. A large air track was built in a former industrial park, a bobsled course was carved into a mountain and, of course, plenty of artificial snow was needed for an area that receives very little precipitation in winter.

The sport and the instrument are linked by a common history, which dates back centuries to the frozen lochs of Scotland. Yet even beyond these cultural connections, curling and bagpipes also seem to be similar pursuits. For the uninitiated, the sport with stones and brooms and the instrument with a bladder and a tangle of reeds can seem heavy and confusing. In expert hands, however, these parts coalesce into something absorbing, even graceful, and undoubtedly one of a kind.

“Why do you choose curling over baseball? Well, there’s something you can’t quite explain,” said Scott McLean, who plays curling and bagpipes for the Granite Curling Club in Seattle and, as a history teacher, has explored the intersecting roots of the two hobbies. “Why do you choose the bagpipes instead of the violin? It’s kind of a weird thing.

Pipers in Beijing said they were drawn to a sound they found fascinating. “Loud and clear and penetrating”, as Zhang said.

But it turns out that bagpipes is an activity that has yet to find a taker in China, which means it’s not easy to become one of those skilled hands. “I only know about a dozen people in China who can play this instrument,” said Chao Luomong, another bagpipe player.

The curiosity and thirst for challenge that attracted this group is familiar among pipers. Learning the instrument is like solving a puzzle. Playing it offers a unique form of expression.

The band – with four pipers joined by two drummers, coming from a variety of backgrounds including elementary school teachers and a freelance set designer – have been playing together for a few years, just as curling competitions were beginning to heat up across the China before the Games. .

In the months leading up to the start of the Olympics, the band would get together after work to try and perfect a few different songs. Pipers have experience with a range of other instruments, including trumpet, clarinet, guitar, saxophone and organ. “We are all versatile,” said Zhang, 36.

But this range has certainly been tested by the bagpipes. Zhang is one of the most experienced bagpipe players, having first learned to play in 2014. None of his colleagues were terribly advanced, so their lessons started with the basics.

“I think the hardest part of learning bagpipes is mostly not knowing enough about the instrument,” Chao said. “Like, when a bagpipe is broken, how do you fix it?”

Apart from the technical difficulty, the Chinese bagpipe players were also surprised by the physical difficulty it could represent. Bagpipes, Zhang said, “require a strong lung.” He described the force it takes to get the sound right – “controlling the air pressure in the bag, to be stable and unchanging”.

“It takes a long time,” he added, “to repeat every bit over and over again.”

The group designed the stitched logo on their uniforms, which includes the letters Y and S, representing the Chinese word for warrior – another tribute to Scottish history.

Yet, they conceded, they did not choose the instrument out of interest in the traditions of a distant place. Curling, by the way, doesn’t matter much to them either. At least one piper tried to loop once and said it didn’t fit. They watched some games on their phones, which they store in their sporrans. “Honestly, I don’t know much about rules,” Chao, 37, said. “What we like the most is bagpipes.”

And yet the group has been emblematic of a transformative time for curling, as the sport balances the traditions embedded in its DNA with a surge in global popularity in the years since it became an event. official Olympic Games in Nagano in 1998. (In Mexico, some clubs have replaced bagpipes with mariachis.)

Chinese pipers gained a worldwide following at the start of the Beijing Games and in doing so received some attention from the Scottish news media. In an article, The Daily Record, a Glasgow tabloid, wrote that the band had “revealed that they loved all our traditions – apart from going commando under a kilt”, saying that it was custom for men not to wear underwear when wearing the garment.

In the article, Zhang replied, “We try to be as close to the traditions as possible, but it’s cold – we have our underwear for sure.”

Otherwise, the response has been much warmer. “I’m very happy to have them here,” Bruce Mouat, from Edinburgh who represented Great Britain in the mixed doubles competition, told reporters after a match. He added that the music reminded him of his home.

On the first night of the men’s competition on Wednesday, Team USA’s Chris Plys noticed them as well. “It’s been a long time since I heard ‘Scotland the Brave’ come out,” he said. “I was not expecting that at all.”

In truth, as remarkable as they may seem, the pipers have yet to have their breakout moment.

Curling has one of the most demanding schedules of any sport at the Winter Games, with competitions running from February 2-20 and with up to three rounds of matches per day. Pipers play before each round, and each performance follows the same routine, becoming a sort of Groundhog Day experience.

On Wednesday evening, as the curlers crowded into a final practice run, an announcer, joined by the plump panda who serves as the Olympic mascot, tried to shake up the modest assembly of spectators scattered in the stands.

As the band came out and started playing, the announcer faced the sound of bagpipes and continued to talk, introducing the curlers from various countries. There was some applause just as the band finished their snippet of “Scotland the Brave”. But the applause, it turned out, was for the Danish men’s team as its members waved to the crowd.

Pipers stood stoically along the edge of the ice, knowing they would be back in less than 12 hours, donning the same uniforms and playing the same song.

The neurosurgeon who came to North Platte