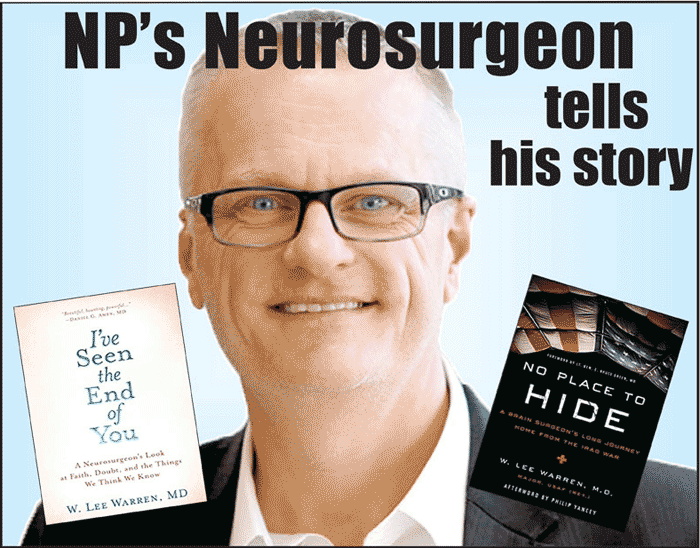 The neurosurgeon who came to North Platte

North Platte neurosurgeon Lee Warren has served his time, practicing his profession under the toughest conditions.

Warren was a combat surgeon in Iraq, enduring some of the most extreme physical and emotional challenges possible.

Her journey of life, faith and war brought Warren to North Platte in May 2020, bringing an unprecedented level of expertise in her field to Great Plains Health.

Not only did North Platte find a neurosurgeon, Warren found a home.

Warren grew up on a dirt road, coincidentally near another town named Broken Bow. This one was in Oklahoma. His grandfather was a cattle rancher, so in many ways Nebraska feels like home.
Coincidentally, he is now building a house on a dirt road outside of North Platte.

He moved here from Casper, Wyo., where the hospital was about to be purchased by a large medical system. He was not happy with the change of direction. He didn’t want to work in a big system, so it seemed like a good time to look around, he said.

He listed his availability in medical publications and he was contacted by a recruitment company seeking a neurosurgeon for Great Plains Health. He was certainly interested. He saw it as an opportunity to bring neurosurgery to a place that had never had it before.

“It seemed like a noble thing to do,” he said.

Warren and his wife Lisa are builders. Along with their new home, they’re almost ready to move into renovated offices and rooms at Great Plains Health’s Brain and Spine Clinic, designed by Lisa. The clinic is now in the Health Pavilion, but will be moving to the old 1975 hospital building, which is immediately east of the 2015-built hospital tower. The interior has been completely remodeled.

Lisa is an integral part not only of his life, but also of his profession, he said.

A lot of people know Warren because he’s not just a surgeon, he’s an author.

Warren has two published autobiographical books, which can be found at A to Z Books in North Platte. His third book is about to be published.

The books are award-winning and praised by best-selling writers who cover similar topics of how to keep your sanity and how to grow spiritually in the face of life’s most pressing challenges.

Max Lucado, who has written nearly 100 books with 130 million copies in print, wrote that “we can greatly benefit from his (Warren’s) wisdom”.

Spiritual writer Philip Yancey said that Warren “has a rarefied point of view, as he makes his living by penetrating into the most secluded – and sacred – part of a person – the human brain”.

Warren’s first book, No place to hidetalks about his time in Iraq, where he treated wounded in a combat hospital made out of tents.

Warren takes the reader with him as he treats friends and foes alike, writing about the wounds he healed, the techniques he used, and his struggle to serve in the faith as the mortars exploded and vital supplies could not be counted. He wondered how God could allow war and why American surgeons should treat wounded terrorists, which everyone else did, along with coalition soldiers.

Regarding this last question, he was told that the medical profession in the United States, even in times of war, sustains life. And, he was assured that terrorists were sent to prison when they were well enough.

As for the first question, he faced the deadly challenge of accepting that he was not in control, and all he could do was do his best and let God do the rest, which is not an easy thing for us humans to accept.
Within a day, he saw someone die for lack of blood, heard the screams of badly burned men, and his phone call home went to voicemail.

He found himself angry with God, but also found solace in others at a church service in the tents, where he was politely but firmly recruited to be minister of music because he knew how to play the guitar.

His emotions ran the gamut of extremes. He did not control the events around him.

“I felt sculpted, sculpted,” he wrote. “Pieces of who I thought I was and how I thought about my life were being chipped away. I wondered what would be left after The Sculptor was finished.

Warren has the ability to write in detail, and he is also able to step back and look at his experiences. He wrote detailed emails home, capturing the details. His emails were so informative and captivating that they were distributed to tens, then hundreds and thousands of people across the United States, as readers shared them with friends and family.

He also writes about his uplifting experiences in Iraq, including helping a 13-year-old Iraqi girl who suffered from seizures. The family had no place to turn but the United States, and Warren was there.

Her emails led to a regular blog, which turned into her first book. By then, tens of thousands of people knew about Warren. His desire to communicate turned into Dr. Lee Warren’s podcast, which is now heard weekly in over 70 countries.

After five hair-raising, trying and introspective months in Iraq, Warren returned to the United States, where he continued to practice neurosurgery in calmer environments.

His second book, I saw the end of you, was released around the time it moved to North Platte. It was around this time in his life when conditions were more comfortable but dilemmas persisted. On the one hand, he had his faith in God and in the eternal life of the spirit, and on the other hand, his extensive knowledge of medicine made him fully aware of the limits of the human brain.

Sometimes knowledge can be too much for mere mortals, but we crave it, and our human spirit cries out for ways to make emotional sense of cold, hard facts.

In both books, he openly and emotionally describes the challenges he faces. The book is for people who want to see their faith awakened.

“Would you like to hear the thoughts of a brilliant surgeon?” If you answered yes, you are holding the right book. Enjoy,” Lucado wrote on the back cover.

Not only did Warren and his wife Lisa move to North Platte, but they also brought about 10 people with him – the core of his surgical team and staff.

Warren loves North Platte and plans to make it his permanent home. He feels “blessed to have this opportunity”, he told the Newsletter.

His desire to stay here speaks to the inherent appeal of North Platte, the growth of Great Plains Health, and the resources coming to west-central Nebraska.

This is good news for patients and good news for anyone who wants to share a journey of faith and learn more about this talented, down-to-earth, open and honest neurosurgeon. Much of his life is an open book or two, and continues through three.

This report was first published in the January 26 print edition of the Bulletin.

The Scottish Curling soundtrack, delivered by pipers from Beijing