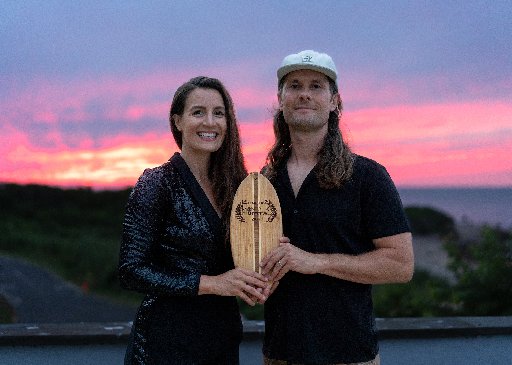 The musical duo began with the experience of the Catholic school

The two met in Mishawaka, Indiana, high school when Speece was 15 and Hoff was 17. Their art teacher encouraged them to write a song that featured Marian as part of a school-wide art contest. the state.

“And I was kind of attracted to Jillian,” Hoff recalled, “but I didn’t really think the feelings were mutual. So we wrote the song together, and the music kind of brought us together in such a way that we were able to start working with each other, and through that, a relationship blossomed.

Speece noted that Hoff “was really quiet in high school” and was “unsure what to do with him”.

“But then when we started writing the song together, I would go to his house and then we would talk for hours. I was like, ‘Oh, he’s really, really funny. And he was just shy. We were writing and performing together, and we had a lot of chemistry on stage, which helped a lot.

Hoff’s musical journey began at St. Jude School in South Bend, Indiana. One of his art teachers lent him a guitar and he used a penny as a pick to learn how to play the instrument.

Speece developed her talent when she came home from school in Corpus Christi in South Bend and played Norah Jones and Beatles tapes and learned to sing the songs while she did her homework.

“I loved to sing. I loved playing. I practiced every day and was captivated by the music. I started writing songs soon after,” she told Today’s Catholic, newspaper for the Diocese of Fort Wayne-South Bend.

After graduating, Hoff left Mishawaka for Indiana-Purdue University in Fort Wayne on a golf scholarship, as did Speece.

Both followed the same daily routine in college. They finished their practice sessions early in the morning, took lessons, and then practiced with the golf team. After practice, they wrote songs together.

At that point they realized they needed a name.

They recalled how Hoff found a bergamot essential oil in a co-op and found its aroma “uplifting.” He showed Speece and they realized they could name their duo after oil. “The whole bergamot vibe is uplifting,” she said, “and that’s what we want to do with our music.”

From there they started spinning. At one point, The Bergamot was asked to open a show for One Republic, but the performance was canceled when the COVID-19 pandemic hit.

“It was a time where we found ourselves at probably our closest breaking point because we lost all of our income for two years,” Speece said, “and this has never happened to us before. And COVID has so shut down the music industry hard. We had to come and mourn that.

She says they had to “lean” on their faith and pray because they didn’t know where to go.

“And then within 12 hours, a patron who loves our music called us and said, ‘Hey, get in your van and drive to Sedona, Arizona. We have a second house that you can live in for free. Nobody knows what’s going on. We want to make sure you are safe.

Now based in Brooklyn, New York, the two have a particularly close and unique connection to the Catholic community in South Bend. Hoff’s great-uncle was Father Leonard Chrobot, a priest who served several parishes in the South Bend area and was a professor at the University of Notre Dame.

“I got to work with him on a lot of things growing up when I had a lot of questions about religion,” Hoff recalls, “questions about faith and understanding and when I doubted parts of my own faith. , my own journey . He was just a very soft-spoken but also very versed person.

“It was so amazing to take our course with a family member who was a priest,” Speece said, “because we could talk in depth and ask questions…and he would just smile and say, ‘Well, let’s talk about that.'”

She remembered that Chrobot would come to Hoff’s family members to celebrate mass at Christmas and other special holidays.

“It was so special because, like, who can do that? It’s really cool, and it made me feel really connected with the actual journey of Jesus. Because, if you think about it, they were coming and going to people’s homes, all over Jerusalem, Galilee and Nazareth, and it was very intimate and very raw.

Hoff said that, overall, his experience with The Bergamot was life-changing and helped him better understand his life and his faith.

“I think of the journey of Jesus. And I think about his connection to people from all walks of life, and how much of a pariah individual he was. I think about the journey we’ve been on as musicians, as I jokingly said – taking this vow of poverty that we’ve had for the past 10 years.

He added that much of what he learned during his time in Catholic schools gave him the tools to deal with the issues he encountered throughout his time with The Bergamot and in his life.

“I feel like my faith has guided me this far and keeps the art alive: keeps what we do alive. There are a lot of really cool miracles that happened constantly in our lifetime. And I would say, especially in the last two years, that I feel really grateful to God for all of that.

Schipper is an editor for Today’s Catholic, a newspaper for the Diocese of Fort Wayne-South Bend, Indiana.