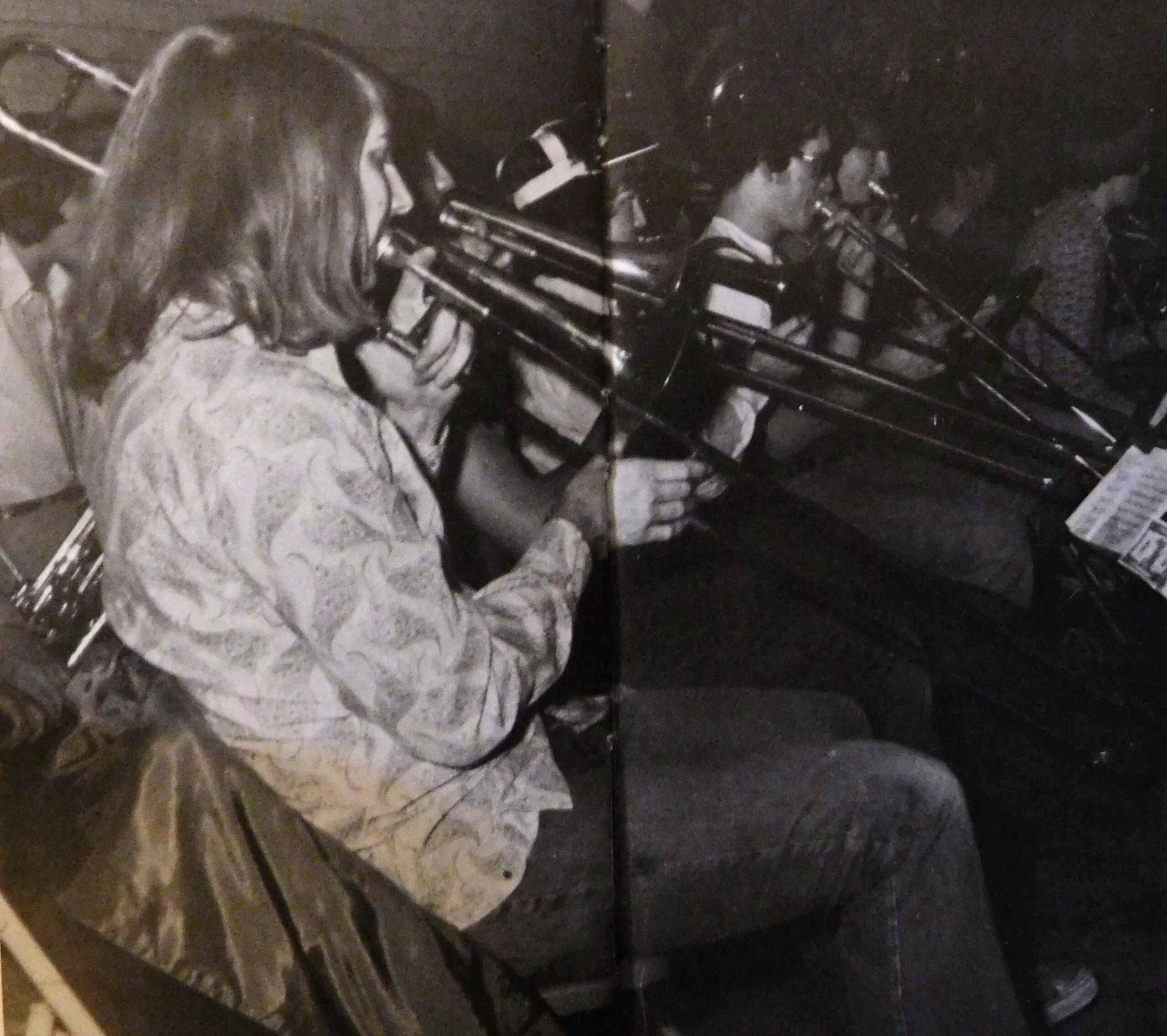 Over the years, many people have entrusted me with their record collection. They’re usually downsizing, moving, or just getting rid of stuff – and I find loads of old stuff interesting.

Recently, I was finally able to listen to an unusual record I received in such a pile – a five-track mini-LP recorded by the Fort Collins High School Symphonic Band of 1963-64. Under the direction of conductor Curtis Johnson, the disc is an example of the success of school music programs.

Forget that description – “school music programs” – for a moment. When I listened to this disc, containing compositions by DeNardis, Bach, Nelson, Reed and Seitz, I was struck by the success of these MUSICIANS. The sounds they made made me listen and enjoy what they were doing. They weren’t just students, they were artists.

What did I like? Through the twists in the music, the changes in dynamics, and the blending of a lot of instrumental vocals, I think this band really knew the music. I could hear a real attachment to that.

My early experiences with music in schools, in my hometown of Illinois, were not so fruitful.

The day came when beginning music teachers first asked us to choose an instrument – in addition to the “flute-o-phone”, that is. I had just watched Herb Alpert and the Tijuana Brass on TV and wanted to play marimba. But the school only had one marimba and they gave it to another student.

Interestingly enough, several years later when I was visiting my grandmother, the next door neighbor came to visit and it turned out that the girl who got the marimba for me was her granddaughter. She informed me that her granddaughter had become “state champion” with her instrument.

I guess the school made the right choice.

I had to move to Phoenix, Arizona to get back into music at school. One day I found myself going to school with a paper clip in my hand and was placed in the beginner group. From then on, I played in the orchestras of all the schools I attended.

In elementary school in Phoenix, I played in bands “B” and “A” and got my first taste of the scene. In high school in California, I joined the marching band, which was also a concert band in the spring. This was also the case when I graduated from high school in Washington State.

These experiences were just awesome. It was an extra social scene for us, we got out of PE, we got to travel, and we got to play music together. There was a special bond between the band members that made it exciting – and at times the music really rocked.

Once I graduated from high school, I put down the trombone and kind of got lost in guitars and rock and roll

My interest in school music programs was reignited when my daughter attended Lincoln Junior High here in Fort Collins. She was in the beginner group and I attended one of their programs.

I was shocked when they successfully played Holst’s composition, “Mars.” I was impressed enough to write to the band manager to congratulate him and the band for attempting such a dynamic piece. Much to my daughter’s chagrin, the director read the letter aloud to the group.

Plus, I’ve loved hearing and seeing the CSU Ram Band perform at over a decade of football games, emphasizing that school music programs don’t just end with high school. Time and time again, I watched the Ram Band stir people up in the stands, then completely take over the pitch at halftime for high-profile entertainment.

One of the greatest days of all was Band Day, when CSU hosted groups of high school students from across the region in a large rally. On one occasion I watched the whole football field full of bands, and wondered if I could see the biggest band in the world at that time – I estimated there were around 500 musicians on the field playing together.

Here’s the thing – these are all great bands; really, the biggest bands in the world in terms of really giving kids the opportunity to enjoy success with music.

Of course, today’s music programs have much more to offer. At FCHS today, for example, the music program includes orchestras, bands and choirs. But more than that, they also offer courses in “Unified Music, Music Technology, AP and Beginner Music Theory, Beginner and Advanced Guitar and Piano, and Rock and Pop History.” Fantastic!

Finding this FCHS file from so long ago was such a powerful reminder of an important part of my life. It also sounded very good.

It’s a recording that has reached out to me for 59 years with a message: support school music programs.

Tim Van Schmidt is a Fort Collins-based writer and photographer. Check out his YouTube channel on “Time Capsules by Tim Van Schmidt”.

Show your support for local journalism by helping us do more. It’s a kind and simple gesture that will help us continue to tell you stories like this.