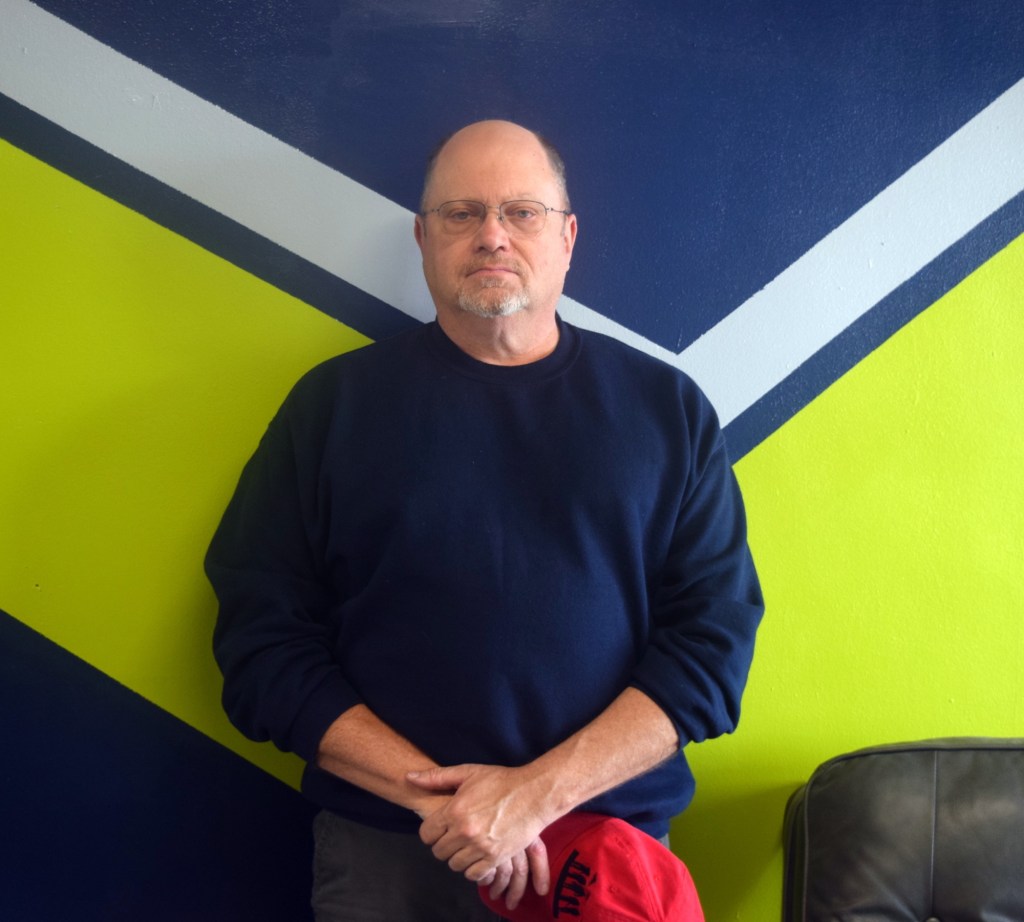 For Dave Mills, better known as “Super Dave” in the Caliche schools, being a caretaker isn’t just about cleaning up messes and fixing things. It’s about creating an environment that makes children want to come to school.

“’Super’ Dave, as we affectionately call him, is exactly that, ‘Super’. Dave Mills is a man who takes pride in his work as our Elemental Guardian. Dave always has a smile on his face, whether it’s for the staff, parents or students at our school,” said Hillary Hykin, his Crystal Apple Award nominee. “He takes his job seriously. When “Super” Dave is needed for anything at our school, he’s there to help. If you need a favor from him, he never hesitates, he is there for you.

Mills, who is originally from North Carolina but now lives in Iliff, has been at Caliche Elementary for two years. Before that, he spent 21 years in the US Air Force and 17 years with Blue Ridge Paper Products, now Evergreen Packaging, making milk cartons for schools.

While in the military, he was stationed at Francis E. Warren Air Force Base in Cheyenne, and it was at the mall that he met his wife, who is from Padroni. During his time in the military, Mills worked in the missile field which took him to northeast Colorado and after his visit he fell in love with the area. The couple moved back to North Carolina for a while, to care for their sick parents, but when they passed away they were able to pack up here soon enough.

When they returned, Mills, who was then retired from the army, was looking for a job when his wife’s friend who worked at the Hagen Early Education Center at the time told him that they needed a child care aide. part time there. He accepted, then last year he was offered the job at Caliche.

With the school without a night watchman at the moment, in order to do all the necessary work, Mills’ day usually starts at 5 a.m. and ends at 2 p.m. From 5 a.m. to about 8 a.m. he spends time catching up on nighttime chores that has to be done when no one is around, then from 8 a.m. to 2 p.m. he does all the normal custodial work, cleaning the toilets and floors, help teachers and fix things.

His favorite time of day is from 10:45 a.m. to 12:15 p.m., when he is on duty in the cafeteria. It is there that he has fun doing the traditional birthday party with songs and applause for the youngest, and sometimes an Elvis birthday party for middle and high school students.

Mills also has fun playing Super Dave, an energetic dark-haired goofball who pilots the floor machine when school has special days and helps the kids search for “prairie fairies.” Additionally, he is known to serenade students and staff, after school hours, with his fantastic musical ability on banjo, guitar, and even mandolin.

Mills not only has a love for the Caliche school, his patriotism is unwavering. He has, on various occasions, proudly paraded his Air Force uniform during special school events, i.e. 9/11 remembrance and Veterans Day ceremonies.

“Our students admire him and his service to our country,” Hykin said.

Mills says that when he wears the uniform it usually sparks a lot of conversation, especially from some junior and senior high school students who are considering joining the military and that he is always up for it. to tell them about his service.

“I’m going to give them the clear message, not the salesman, recruiting is a salesman, be honest, and just give them some mentoring if that’s the path they want to go down. I tell them, you will know very quickly if this is your cup of tea or not. But, if it’s not the best training you can get in the four years, then when you go out, it’s something you can use and it’s acceptable on the outside,” a- he declared.

Mills also goes out of his way each year to invite an elderly boy to dinner and talk to him about what he wants to do and give him advice on how to be successful in life.

“I don’t think it’s taught anywhere. I mean the basic stuff, like always do the right thing, not the quick thing, not the easy thing, always do the right thing. I keep telling them that they can do and be whatever they really want to be, the only limits are what they put on themselves,” he said. “You start thinking to yourself that I can’t do this or this, that, so you’re done. So I like to challenge them, all of a sudden when they do the challenge, that’s when the light bulb goes on and that’s my job satisfaction, not just the school being clean.

He has a special bond with the students and they know they can always say anything to Super Dave.

Mills, who was shocked and honored to receive the award, says there are others more deserving than him and was quick to point out that he is part of a team effort that makes Caliche such a positive place.

“I love Caliche, we call it Team Caliche. Great, great set of teachers, we have great leadership there, we sit down together and solve problems, we’re a great team. It’s not my job or yours, we all work together to make sure there’s the right environment for kids to excel and I love being a part of that,” he said.

Mills had a motto for the school, “we are Caliche, we don’t deal with excuses, we deal with solutions” and it’s something he takes to heart whenever he “contracts” with teachers , asking them to tell him exactly what they need from him and in return he will let them know what he needs to make it happen.

This motto was also front and center for him and the rest of the school staff recently when COVID-19 hit. Although there were challenges, for example, he was washing face masks every three days to ensure students had clean masks, he and his colleagues tried to work together to find solutions to all of them. problems that arose.

Mills sums up the Caliche Elementary team in two words: “we care”. It’s easy to see how much he cares about the students and staff at his school and the feeling is mutual.

“’Super’ Dave’ is well-liked and respected not only by the students, but also by the Caliche staff. Dave Mills is the perfect candidate for the Crystal Apple Award. He is the one in our school who goes above and beyond the call of duty. He gives more than 110% in his work. Our students look up to Dave and he is admired by everyone at Caliche schools,” said Hykin.