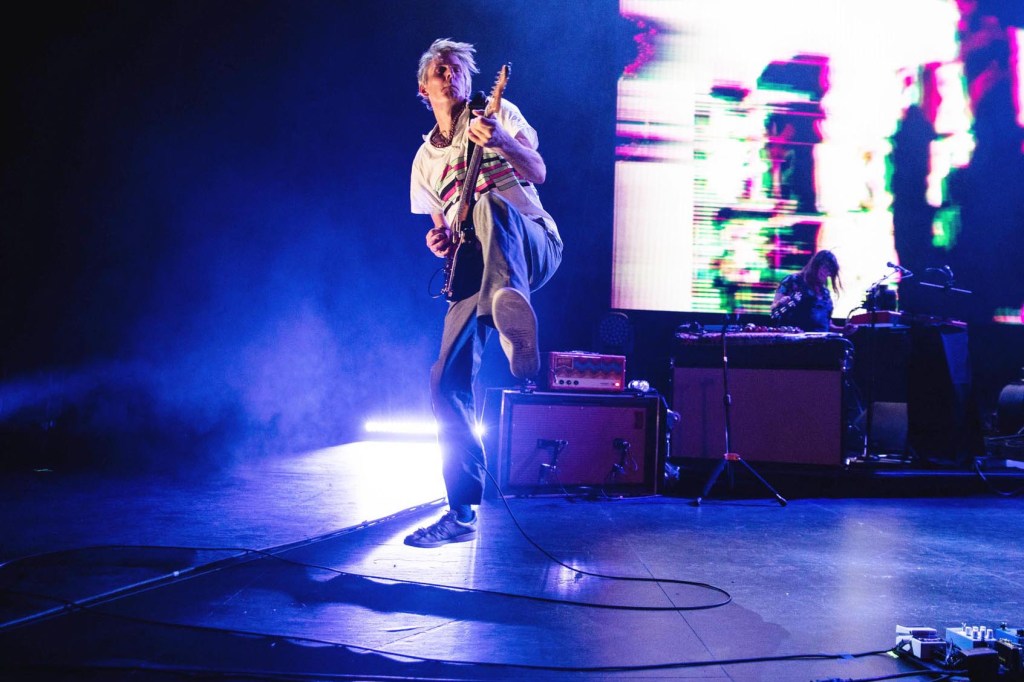 Pavement had so many amazing moments during their historic four-night run in Brooklyn. But one of the funniest came on Sunday night, after the legendary ’90s indie jesters took a ramshackle stab at “Spit on a Stranger.” Stephen Malkmus shrugged and told the crowd, “It was a version of that song.” A typically bitchy joke – but it also showed the band’s cheeky confidence. During the four nights at the Kings Theater in Brooklyn, Pavement didn’t just return to those golden sounds – they took them somewhere new. And the four nights felt like a gloriously surreal celebration of this band’s gloriously surreal legacy,

The last time Pavement did a reunion tour, in 2010, they had to prove they could handle it: ex-magicians who still knew the tricks. But this time there was no suspense, only rewards. In Brooklyn, even a lifelong fan must have been shocked at how these guys kept pushing, musically and emotionally, especially since Malkmus is a massively better guitar player than he was in his younger days. exactly loose. On Sunday night, after turning “Folk Jam” into a two-guitar psychedelic medley of 1977 TV classic “Marquee Moon,” Malkmus introduced the band as “Phishport Convention.”

Each Brooklyn show had a different setting and a different vibe. Night one was “soft gold jams”, night two was “high energy deep cuts”, night three was “high personality hard jams”, and night four was “gold deep cuts soft”. (Night Three was my favorite, but all four had their followers.) The band’s high-flying enthusiasm carried them through an exhilarating rush – 25 songs in two hours, unleashed across their entire catalog, rocking the house every night. with a few dozen of the greatest tunes ever written for electrically amplified string instruments. I met fans who had traveled from all over the world – it was like a festival.

Pavement made sure-fire classics like “Gold Soundz” and “Range Life,” from their 1994 Twisted rain, twisted rain, the best album of the 90s that isn’t Inclined and enchanted. They also lay down for thoughtful jams to “Pueblo,” “Type Slowly” and their gorgeous hippie version of Jim Pepper’s Native American jazz chant “Witchi Tai To.”

On the other hand, punk eruptions like “Debris Slide” got rowdier than ever. They eliminated obscure fan favorites: “Give It a Day”, “Home”, “Spizzle Trunk”, “Half a Canyon”, even “Gangsters and Pranksters”. After an attack on “Two States”, Scott “Spiral Stairs” Kannberg explained, “We were listening to the Chute before continuing.” Malkmus added, “We listen to the fall in the fall, Rites of Spring in the spring.”

It’s bizarre how much Pavement’s mystique has grown in recent years. Who would have bet on ‘Harness Your Hopes’, an obscure B-side choogle, exploding into a viral TikTok/Spotify hit, 20 years after he madly dropped it from the album? At this point, it’s their biggest crowd pleaser. But Pavement played their belated success with puzzled affection. As Malkmus said on Friday night, “Nobody told us that song was good in 2010, for example.” (All these years I assumed “Madonna del Verona” was a Renaissance statue or something. It wasn’t until this weekend that a young stranger from the beer line explained to me why she idolizes Olympic swimmer Donna De Verona.)

Pavement first announced these reunion concerts in 2020 — just before the pandemic kicked in and pushed the whole thing back for a few years. The delay could have killed the buzz, but not on this tour. People were waiting for these concerts, and clearly, the band too. In one of their best singles, “Circa 1762” (tragically unreleased on this tour), Malkmus declares: “We light the burnt match! Light the burnt match! And stick a flag on it. It could be the mission statement.

The exuberance on stage never wavered. Bob Nastanovich was the MVP fashion man – if every band needs a glue guy to hold it together, Bob has to be the stickiest glue guy ever, uplifting the mood of everything the world to the rafters. Having the world’s biggest Pavement fan on stage is one of the smartest moves this band has ever done, whether it’s dancing, singing, hitting a tambourine or throwing ping balls. -pong in the crowd. As Malkmus said on the first night, “Bob prowls this stage like a cheetah.” (Later that weekend, he added, “One of the toughest jobs in show business. Or one of the easiest — we’re not sure.”)

The band got a welcome boost from Portland, Oregon musician Rebecca Cole, of Wild Flag and the Spells, who added her magic on keyboards and vocals. Bassist (and Brooklynite) Mark Ibold gave a celebratory shout out to locals: “Park Slope! Green Point! Sunny side! THE ! Malkmus warmly hailed Spiral Stairs as “the long-suffering member of Pavement”. He also praised drummer Steve West, saying, “He’s got a great one tonight, and I’ve seen them all.” On Sunday, Malkmus called West “a young man from central Virginia — he calls him the valley.” Then the California boy reflected, “I’m from another valley…Valley of the New York Dolls.”

A typical hit was “Major Leagues”: Like a lot of their music, it sounds like a song the gods wrote for a different band, but accidentally sent to Pavement instead. The tune is so beautifully fragile that Malkmus could only adapt to it by pairing it with his most casual lyrics, to the point where it’s comedic gold. (I mean, he actually sings the line, “Relationships, hey hey hey.”) But the spirit is there to protect you (and him) from pain in the melody, until he whispers, “Answer my walls and see if they fall,” one of his truest lines about overcoming your defenses in your 20s. On Friday, he sang that line as if bored; Sunday, he l sang as if he had been waiting for this moment all day.

Because Pavement debuted in 1989 and split into Y2K, they’re tied to the 90s, but the truth is, today’s young fans hear this band more clearly and creatively than generations. previous ones. As with Joni Mitchell, Sade, or Dolly Parton, Pavement resonates on a deeper level for listeners who come to music fresh, undistracted by outdated stereotypes. At the time, Pavement was constantly labeled as a supposed mouthpiece for Gen X’s boredom, a cliche hack that never had anything to do with the open range of their work. But music has long survived clichés. A huge percentage of the best tracks of the last decade come from young guitarists inspired by Pavement.

Case in point: the Pavement pop-up museum in TriBeCa, which opened just for the weekend, curated by filmmaker Alex Ross Perry for his upcoming film about the band. “Pavements 1933-2022: A Pavement Museum” (“New York—London—Tokyo—Stockton”) was an adventure through their history. Some of the artifacts were real, like posters and flyers; some were faked, like the vodka commercial (“Absolut Pavement”), or the Playbill for the Broadway musical Inclined! Delighted! Some you couldn’t even tell, like with original drummer Gary Young’s nail clipping. “On loan from a private collector” — good. On Saturday afternoons the facility had fantastic indie bands like Snail Mail, Speedy Ortiz, Soccer Mommy and Bully playing Pavement cover sets. Snail Mail did a damn good “Starlings in the Slipstream”, while Soccer Mommy nailed “Gold Soundz”. (Speedy Ortiz’s Sadie Dupuis used to play in an all-female tribute band called Babement.) At the end, the four singers came together to jam to “Grounded,” to applause from the members of Pavement.

For fans around the world who have been following this tour via YouTube, since it kicked off on the West Coast this summer, it’s been an adventure to watch Pavement continue to drop more songs. On Monday night, they finally waved the Wowee Zowee “AT&T” nugget. The night before, Malkmus apologized for not playing it, but admitted he was still figuring out the riff. It happens. On Sunday night, he kicked off “Cut Your Hair,” telling the band, “Fuck, I’m ready!” Except he fell apart after a few seconds, because he wasn’t fucking ready.

The crowd’s enthusiasm was infectious — on the one hand, it’s weird how phone-free these shows felt. For minutes at a time, for the whole songs, you could look around and see thousands of people listening to music in the dark, without a single screen. There were no requests from the band for this, no phone cases. people were fair thethere, you know? They pulled out their phones, took their picture, then just put them away. It was an eerily beautiful part of the fully immersive sound experience – the “come join us in a prayer” vibe.

They closed the race with “Fillmore Jive”, the dirge with the famous epitaph “Good night in the age of rock & roll”. This joke hit differently in the 90s, the all-time high of the rock & roll era in terms of sales and art. But Malkmus changed it to “rock & roll mistakes”, while Spiral Stairs put on a Hendrix-style display playing guitar behind his head. Eras end, but mistakes continue forever, which keeps things interesting.

There was a weirdly touching moment when Malkmus and Nastanovich made jokes about Monday night football and the Buffalo Bills. Bob began to reminisce about a Buffalo gig they played in 1994, when other members of the band were intervening, with mentions of deceased friends who were there. It was enough to remind those of us who aren’t musicians: Oh yeah, this This is why it can be difficult for bands to play together again. Messy memories. Shared stories. There is a lot of past tangled in this music. You really have to love those golden sounds to go back to them all the way, like Pavement did night after night.

A moment that hits harder than ever: “Shoot the Singer”, when these elegiac guitars come into play and Malkmus laments: “I saw saints, but remember I forgot to point them out .” When he first sang this line, in 1992, he made it sound like the essence of childish desire. Yet that now seemed to sum up the emotional urgency of these shows. It was a reminder that you miss 100% of the saints you don’t report. And we were grateful that Pavement chose this moment to stick a flag on these songs.