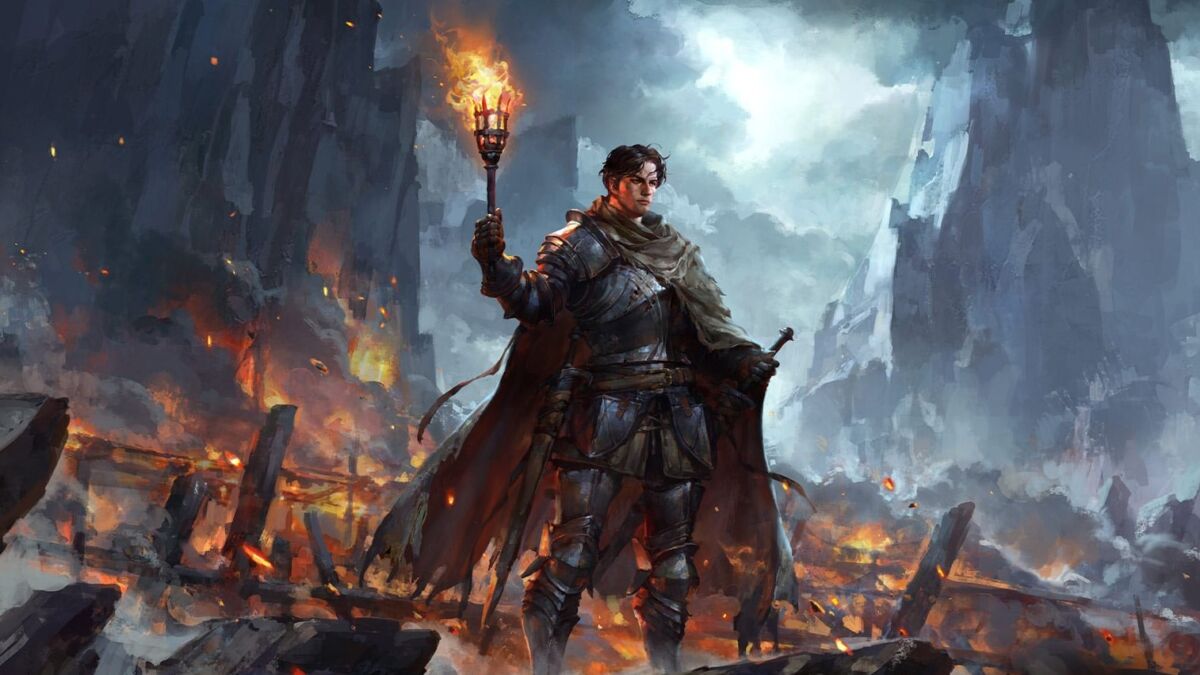 Lost Eidolons (PC) REVIEW – The Definition of a Mixed Bag

It’s no surprise to see the role-playing and strategy genres blending together in many projects, since they fit so perfectly. Role-playing design brings interesting characters and exciting storylines to the table, while strategy design principles enhance gameplay with engaging decision-making opportunities and management mechanics. Ocean Drive Studio’s Lost Eidolons has the bones of a solid tactical role-playing game, but its unbalanced quality across the board stifles any lasting impression.

As you dive into Lost Eidolons, you’ll find yourself immersed in a medieval-inspired fantasy world filled with fantastical creatures, magic, and noble plotters. You play as Eden, a young, intelligent and charismatic small-town mercenary captain, who is forced to uproot his familiar life and lead a rebellion against a crumbling tyrannical empire.

You can expect to interact with a wide range of characters, recruit them, fight battles, upgrade heroes, manage skills, and upgrade your camp. Overall, Lost Eidolons is packed with a great deal of content in the main narrative and side quests – an impressive feat for a low-to-mid-budget game.

However, Lost Eidolons is a mixed bag in almost every aspect. What aspects of developers succeed and achieve a certain level of quality, are quickly subsumed by a myriad of confusing issues.

On the presentation side, perhaps the highlight is the sound design. The voice acting is especially impressive when paired with decent writing, all of which helps the player endear himself to the core cast of characters. There’s a particularly massive amount of dialogue in Lost Eidolons, which makes it all the more shocking not to hear the solid voice acting in smaller conversations, showing the limits of the game’s budget.

The music is generally tailored and well-composed throughout the game, with interesting and contrasting track choices ranging from classic fantasy themes with deep drums and strings, to energetic rock with electric guitar and powerful vocals. Unfortunately, there’s a severe lack of ambient music (or sound effects, for that matter) throughout the many dialogue sections, which makes the world feel eerily empty.

The graphics department definitely leaves something to be desired. The visuals are usable at best and downright ugly at worst, especially when you notice the superbly ugly and distracting background texture work in the dialogue or cutscene sections.

Elsewhere the body animations are quite dynamic with hand movements and postures effectively reflecting the emotions and feelings of the character, but again this contrasts with a rough, stilted and lifeless facial animation that sticks out like a sore thumb , especially given the quality of the voice acting. The worst part of the game’s visuals is the absolutely atrocious lighting in the dark sections of the game where it almost looks like the light is being eaten up by the dark or they just failed to give most of the flares the ability to generate light. Also, there is no gamma slider to compensate for this lack of lighting.

Arguably the most fun gameplay element of Lost Eidolons is the combat. Unlike other RPG-style hybrid strategy games, like King’s Bounty 2, the combat here is less cerebral and more action-packed and fast-paced, punctuated with punchy and flashy animation cutscenes to liven up the battlefield. .

There’s a wide variety of classes and a decent mix of weapon types to customize your party with solid tactical decision-making opportunities. There’s a neat weapon-swapping mechanic that makes characters all the more flexible in battle, allowing you to deal with different combat situations and adapt on the fly.

Terrain and environmental effects also lend themselves to creating a more dynamic battlefield, with the magic system including unique interactions with geography, such as freezing wet opponents or setting fire to thickets. Lost Eidolons sports an engaging weak point system for large creatures, requiring an understanding of positioning and chaining of actions, making battles against large creatures all the more fun.

For a roleplaying game, a robust gear system is pretty critical, as it’s one of the main ways to get invested in your characters and define their combat roles. Unfortunately, Lost Eidolons has one of the least inspired loot and item systems of any recent RPG.

Almost all items are simply named and categorized by their rarity with little to no cool names or unique stats to distinguish them from one another. You’re sure to get tired of going through endless lists of the same common or rare weapons and items, adding unnecessary repetition and unnecessary content to the game. simply a bunch of copies of the same guns you’re likely to be with anyway.

The greatest strength of the narrative of Lost Eidolons is the heart of its story which is found in the friendships of the main characters: Eden, Leon, Francisco, Robin and Robere. It’s an absolute pleasure to get to know and interact with them and it’s clear that they’ve been fleshed out as characters, actually helping to support any slower or less engaging sections. However, some character motivations seem forced and absurd, raising questions about the overall world-building.

Throughout the game, you’ll spend a lot of time in sections of the camp where you’ll manage your party and choose new quests to take on. Unfortunately, these parts can get repetitive and tedious with lots of backtracking, though the fast travel system helps reduce some of them. Character interactions, especially fully voiced ones, also help improve camp activities.

Gameplay and presentation aside, Lost Eidolons has a host of moderately grating issues that further dampen its successes. Some of them include clunky controls that are clearly optimized for gamepad use and a console experience, leaving mouse and keyboard by the wayside.

The user interface is cumbersome and inefficient; equipping characters with new items and checking their stats takes way too long, which is only made worse by poor controls. Additionally, there’s no way to save or pause during the many cutscenes and dialogue sections, which can be incredibly annoying if you want to enjoy the voice acting, the writing, and the world, but can’t. not allow you to sit for long sections of dialogue at a time. It simply takes control away from the player and limits their ability to approach the game on their own terms.

Perhaps the most notable of these issues is the game’s poor pacing and jerky editing. that interfere more with your understanding of what’s going on than help you immerse yourself in the world. . Oddly enough, most of the central narrative is relatively easy to follow.

The best example of jerky editing and poor scene setting is most of the dialogue sections in that they are split into several smaller sections with extremely long wind-up times to trigger. Essentially, there’s this jarring start-and-stop feel to the main dialogue sections, whether in-combat or out-of-combat, which makes the devs feel like they’re filling out their game.

The technical element of the game is largely tweaked, although there are noticeable frame drops during intense animation scenes involving magic spells, so there is clearly some optimization work that still needs to be done. do. If you meet the recommended specs, you should be fine as the game isn’t too taxing, but expect some slowdowns with magic usage.

Ultimately, Lost Eidolons has a lot of strong elements that do well with the RPG core, which are its main characters, due to the solid voice acting and decent writing. The combat system is also quite enjoyable, though it might not be perfectly paced to counter some of the game’s weaker elements.

In all other aspects, it looks like the development team is either short on budget, inexperienced, or both, as there are many basic missteps in storytelling, character customization, and technical stuff. that bring the game down. Lost Eidolons is a serviceable RPG that we can only recommend for sale or if you’re a hardcore TRPG fan.

A code for Lost Eidolons was provided by PR for the purposes of this review.

Some of the coverage you find on Cultured Vultures contains affiliate links, which provide us with small commissions based on purchases made while visiting our site. We cover gaming news, movie reviews, wrestling and more.

The characters form the heart of Lost Eidolons, but a whole host of irritating and annoying issues make it an unremarkable tactical role-playing game.

Listen: A star-studded tribute to Leonard Cohen and a multimedia ode to Oakland’s black history