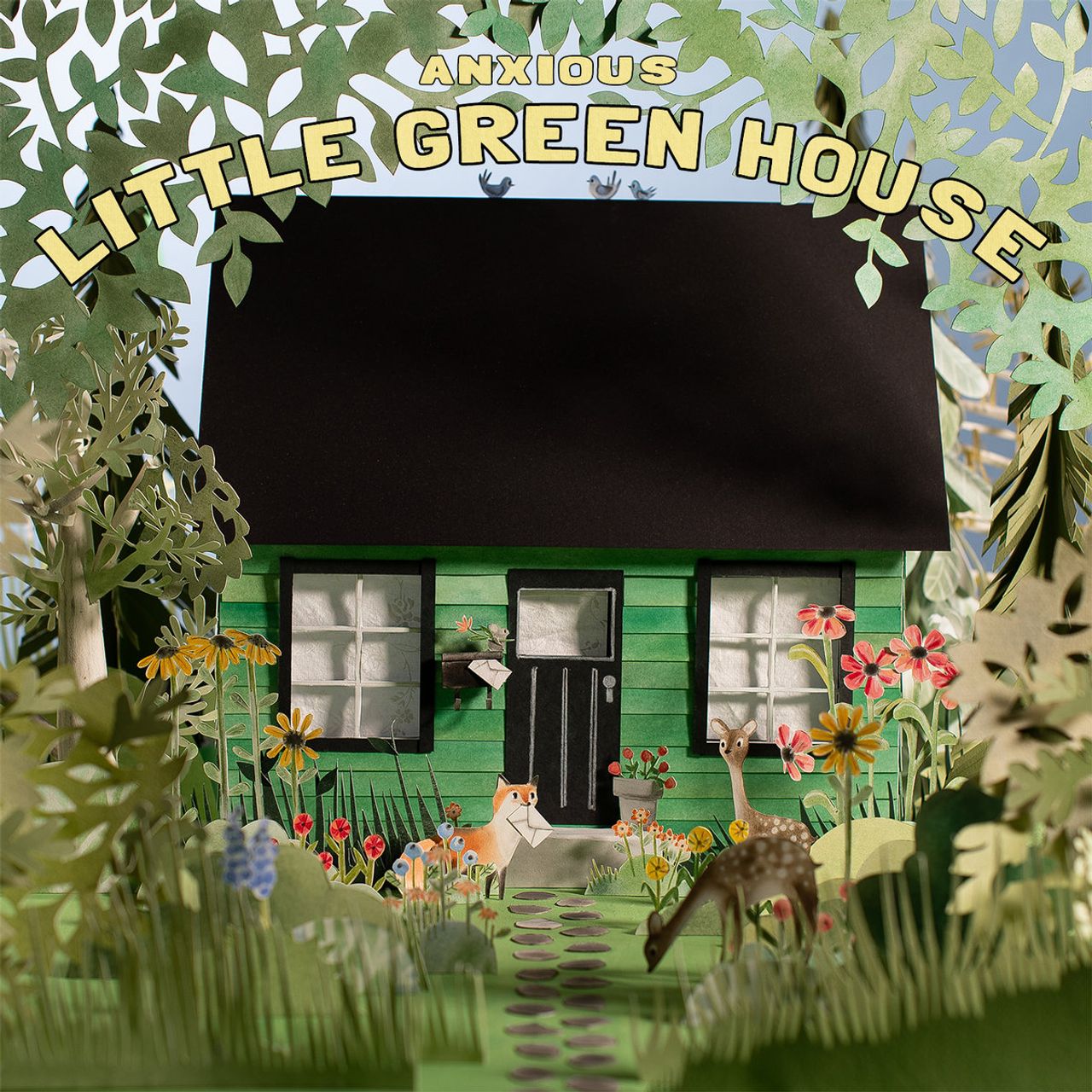 Connecticut band Anxious ring in the new year by releasing their debut album little green house in January. The first thing that jumps out at Anxious is the youth of its members: their ages range from around 19 to 21 years old. The musicians grew up together and have been playing in a band since at least high school, which isn’t a very distant memory for any of them. Additionally, the album is named after the childhood home of the band’s lead singer, Grady Allen.

Journalists described Anxious as having ties to the local hardcore punk scene. Hardcore was a faster, more intense version of punk rock that emerged in part as a reaction against the more romantic or consciously arty directions in which punk was moving around 1979. Hardcore songs tended to be short (sometimes less than one minute) and feature angry shouting, vaguely leftist political themes, and dark or provocative humor.

But Anxious has a closer musical resemblance to emo, a trend that grew out of hardcore and focused on feelings and relationships rather than politics. Influences from early emo bands Dag Nasty and Rites of Spring, and more recent and popular Jimmy Eat World and New Found Glory, can be heard on Anxious’ early days. The Connecticut band clearly paid close attention to the music of their predecessors.

From the first note of the first album, we notice how polite the group is, especially considering the youth of its members. Guitarists cleverly use basic techniques such as palm muting and harmonics to provide accents. Singers can carry a melody and even harmonize. But most impressive is the skillful, precise and powerful drumming of Jonny Camner, the most musically accomplished member. Camner provides much of the group’s energy.

The arrangements of the songs also demonstrate intelligence and creativity. Some of the band’s techniques, such as switching to half-time in the middle of a song or creating tension by hammering staccato eighth notes, are characteristic of this style of music. But other devices are more interesting, like the occasional suspended chords that suggest both possibility and tension. Dynamic changes, within and between songs, keep the listener’s attention and provide variety. The group also makes good use of its multiple singers by contrasting low and high parts and contrasting singing with shouting. This palette suggests that someone involved in this album is more astute than one might expect.

The opening song, “Your One Way Street”, sums up the band’s approach perfectly. The band storms out of the door to establish the song’s main theme. But soon, all the instruments stop except for a muted rhythm guitar as the vocal melody begins. After a few lines, the rest of the band rejoins and the vocals turn into a guttural, cartoonish bellow. (This technique is tolerable in small doses but quickly wears out over the course of the album.) When the main theme is picked up, the vocals become serious, dynamic harmonies atop the charging group. Once the song is over, the harmonies float ethereal above the harmonics and fade away. It’s one of the most memorable songs on the album. The overall effect is of a band who, while not pushing the boundaries of their chosen style, certainly play with panache.

Anxious uses similar techniques, with similar success, on the song titled “Growing Up Song”. Insistent arpeggios translate the impatience of a teenager to enter adulthood. The call and response of the choir completes a low vocal part with a high part. As in the opening song, the high-pitched vocal part, sung by several voices, continues after the band has finished playing. A voice ends the song with a fanfare too calculated to have been improvised.

Sometimes the band’s apparent sincerity is a little too alluring. An example is the soft “Wayne”, in which an acoustic guitar is the only accompaniment. The ingenuous vocals and Partridge-Family-style backing vocals are enough to make punks chuckle. A different issue is evident on “Let Me.” The album’s weakest song is a bellowing emotional appeal that doesn’t elicit sympathy.

The conclusion “You When You’re Gone” is easily the top of the album. It is based on a distant echo-like chord and proceeds at a more relaxed pace than the other songs. The sustained notes of bright electric guitars evoke a summer daydream. The unforced and moving vocals of Stella Branstool (of the band Hello Mary from Brooklyn, New York) bring a breath of fresh air. Although the song is vaguely reminiscent of bands like the Sundays, it seems to show Anxious finding his own distinctive voice. The style of the song is suited to its themes of innocence and love. little green house is a respectable debut album. The band’s energy, fast tempos and crisp playing keep the songs fresh. Not every song is memorable, but almost all have an appealing musical phrase or two. Unfortunately, they also each contain at least one snapshot. Granted, the youth of the group calls for indulgence, but surely they can do better than pile up tired phrases like “no one is to blame,” “you left me speechless,” and “you’re everything. which I need”.

This issue points to the album’s most notable weakness. Not a single song is addressed to the outside world. Each deals with issues related to relationships or coming of age. Anxious comes across as a group of well-adjusted, well-meaning young men who are finding their bearings as adults.

But they are doing so amid a global pandemic that has claimed millions of lives, the threat of world war, and the growing turn of the American ruling class towards fascism. If Anxious has ties to hardcore, then why haven’t they addressed any of these issues? For all their political limitations, hardcore bands like the Dead Kennedys, the Circle Jerks, and the Dils sang with urgency about political backlash, inequality, and war. The crisis has become much more advanced in the decades since these bands first turned on their amps. The silence of Anxious on these questions is all the more flagrant.

Nevertheless, the group’s first album demonstrates professionalism and a certain amount of creativity. “You When You’re Gone” suggests what the band is capable of, but it’s perhaps a bad sign that the best song on the album features someone from another band. The anxious still define themselves. To progress artistically, they must move further away from their childhood home.