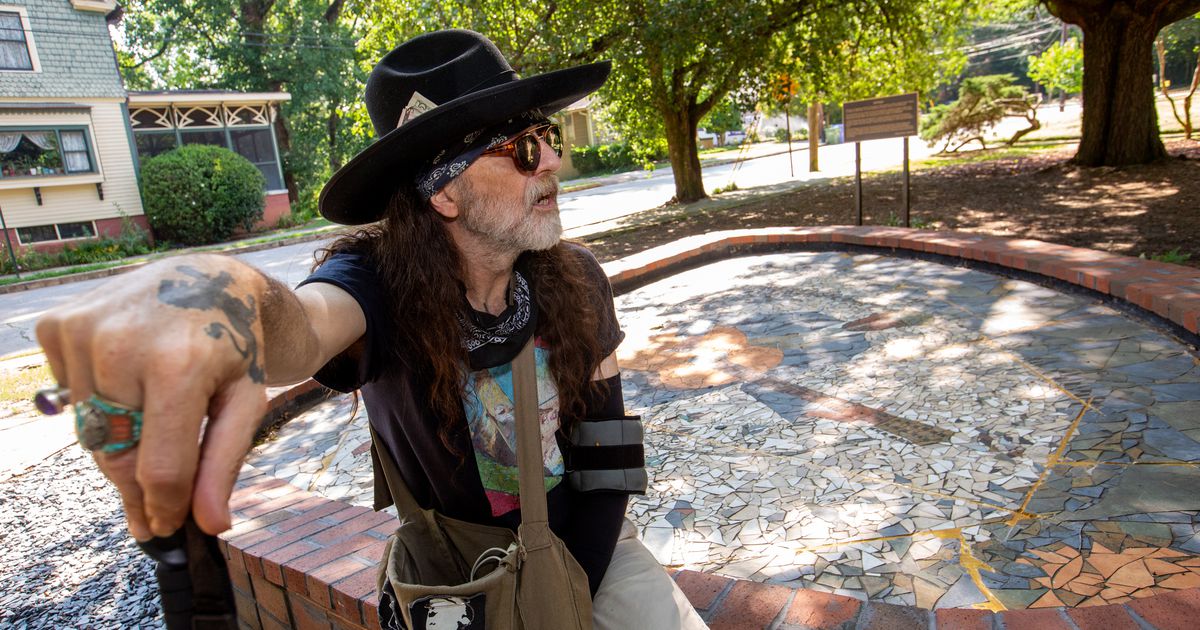 Little Five Points saved a monumental mosaic; the artist is not happy

Last summer, Johnson reassembled the mosaic. The result should have been a win-win. Instead, the broken image now depicts broken relationships between the artist and his benefactors.

In question, the modifications that the community center made to the mosaic after its installation. “Blind Willie was able to look at it himself and see that it had been damaged,” Johnson, 55, said during a recent visit to Atlanta.

“We’re sorry – the board and everyone within the Little Five Points community center – feels this,” said David Shorter, the center’s executive director, but Shorter is surprised at the reaction. “It’s still the Blind Willie McTell mosaic, as it was in the square.”

The photo on the left shows part of the Blind Willie McTell mosaic as it appeared last summer, after being moved and repaired by the artist, using gold resin in the joints. The photo on the right shows the mosaic today, after a restorer modified the mosaic. Photos: Brad Booth

The photo on the left shows part of the Blind Willie McTell mosaic as it appeared last summer, after being moved and repaired by the artist, using gold resin in the joints. The photo on the right shows the mosaic today, after a restorer modified the mosaic. Photos: Brad Booth

This story began in 2005, when Johnson was commissioned by the city of Atlanta to create the mosaic. A longtime resident of the Little Five Points area, he had worked with the city on numerous occasions, painting murals and leading public art workshops for children. After creating the mosaic, using stone and tiles he had salvaged from many other projects, he moved to the Perugia region of Italy to be with his newborn son, Cosimo.

Bender guaranteed Johnson a $20,000 budget to move the artwork and assembled a committee to help coordinate the project and raise funds. He personally agrees to pay all costs not covered by donations.

Moving the mural in one piece would have cost more than $100,000, Johnson said, so he decided to break it into pieces and reassemble it according to the Japanese art of kintsugi. This art uses powdered gold to outline seams in broken pottery repairs.

To make the move, the Blind Willie mosaic was cut into more than a dozen pieces, the largest of which weighed 850 pounds. Johnson planned to use a gold resin between these pieces to reference the kintsugi aesthetic, but on a grander scale.

During the reassembly last summer the weather was bad. Johnson, his son and an outside contractor installed an awning to protect the project from the rain, but some resin spilled out of the seams between the sections.

Shorter said some members of the community center told him the project seemed shoddy. Johnson was back in Italy by then, and Bender contacted him about cleaning up the spills. Johnson suffered multiple strokes and Bender said, “There was a question as to whether his health would allow him to come back.”

By then, ownership of the room had transferred to the community center, and the center’s board of directors voted, against Bender’s wishes, to hire a conservator to clean up some of the spills.

In June, Johnson was invited back to the United States for a dedication of the mosaic, which had been dressed in cast metal signage, a gravel driveway and plantings.

He arrived on June 27 and visited the mosaic on June 28. “I literally had this feeling where your stomach is dropping,” he said. “I thought it had been vandalized and they hadn’t noticed yet.”

While the spills were being cleaned up, the gold resin had also been removed from a few seams, including one that ran down the middle of the image, across the guitarist’s face.

Johnson’s emails to center members and Bender were searing. “I was pissed off,” he said.

On Friday, July 8, Johnson sat on the brick wall that surrounds the mosaic, his long hair held back by a bandana and a Billy Jack hat. He carried a cane to deal with the lingering effects of his last blow.

“It was altered, against my will, in an obvious way,” he said. “My shock is that there is no doubt about it.”

He said the center owed him something between $30,000 and $80,000, for his efforts and for the embarrassment he had to deal with. “I feel like I need to be repaid for being ambushed like I was,” he said.

But it may be difficult to cash in.

“He’s been so hostile to so many people and very offensive,” Bender said. “It’s hard to swallow the feeling that we’ve been treated very disrespectfully and to come back and say ‘hey, let’s give ourselves some more money’.”

Bender has already committed $25,000 of his own money to the project, including $10,000 for part of the cost of moving the mosaic, and another $10,000 bequest upon his death to cover maintenance.

Christina Hodgen, a committee member who coordinated the project, said, “I think there is a sensible solution that doesn’t involve $30,000. It would be sad for me if the negativity surrounding this was all that was remembered.

Center, Committee, and Johnson are still working to find common ground, and that blues song isn’t over yet.

How Skipping Strings Can Energize Your Lead Guitar Playing

New return to music program for the over 55s