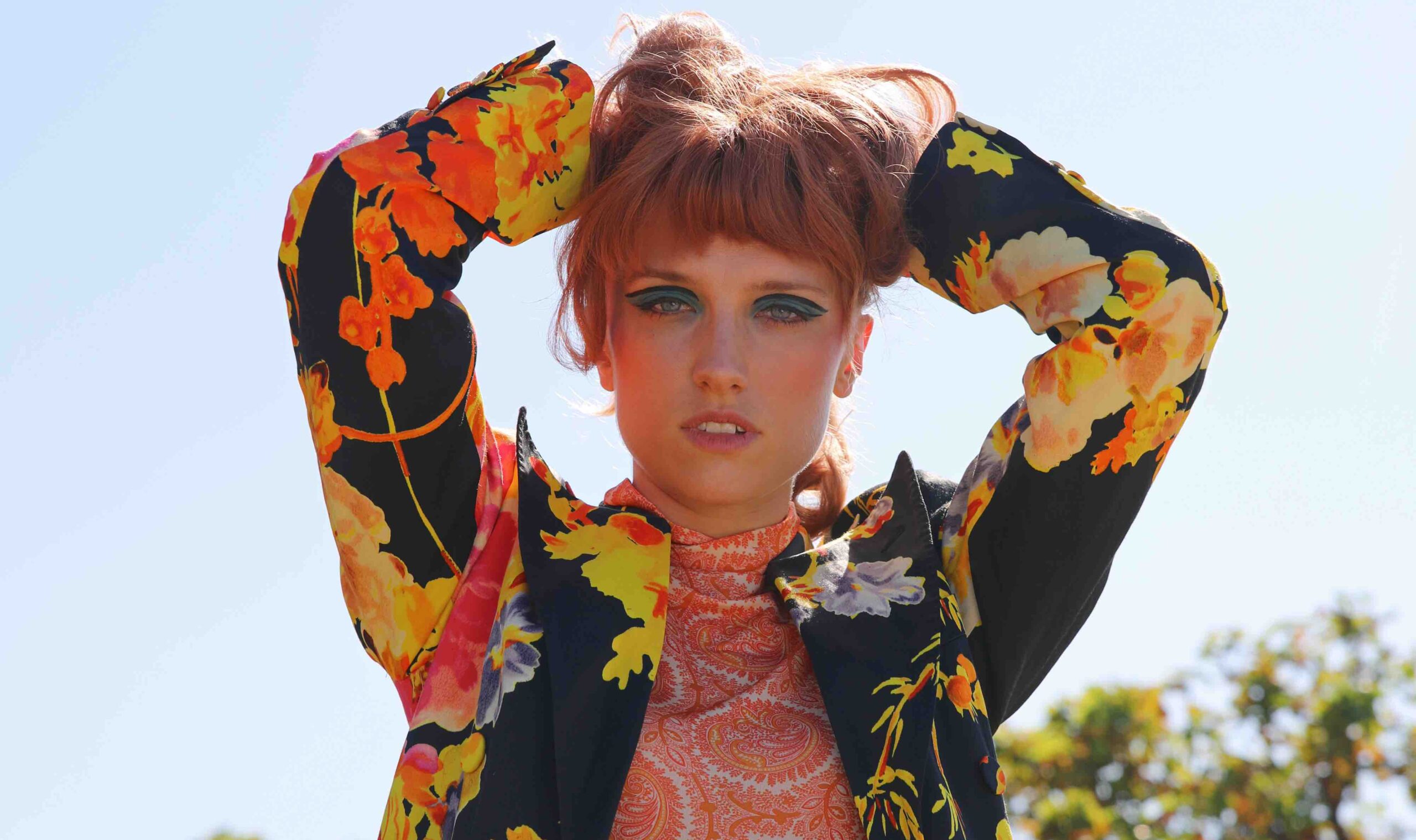 We were all in a weird place during quarantine. For many of us, that meant suddenly remembering a song or album we hadn’t heard in a decade, diving deep into memories of the time it played a role in our lives, and finally realizing for the first time just how weird the music is. For me, it was the Christian rock that I was spoon-fed as a preteen (what a strange industry!), while the strange who ex-singer of Priests Katie Alice Greer revisited was a bit broader, offering a more complex palette for his debut solo album than his band ever conceived.

If “extreme” and “unbalanced” seem like a little too aggressive terms for Barbarismminimal and subtly distorted electronic sounds, maybe try giving the record an extra turn or two. Greer’s chirping vocal effect may immediately signal the project’s left-centering, but repeated listens will likely reveal the disc’s patchwork collagiality, both in terms of influence and in terms of the almost perceptible points of the instrumentals holding everything in place. . The result is something Frankensteinian less in the sense of terror it evokes and more in the moving humanity its many facets represent.

“I think maybe being in quarantine a lot of my listening habits while making this record were just me looking for stimulation, something to break up the boredom of monotonous everyday life and the creeping fear of not not knowing how long it would last and how fast the world was deteriorating,” Greer shares of the music she listened to while the album was being prepared. “I like to feel that the music hits me viscerally, I want it to grab me by the shoulders and make me pay attention.”

Now that the record is out, Greer has created a playlist of some of the tracks that fit those criteria, which helped her create a collection of songs that “felt like they were lost in the desert.” . Check out the playlist and its descriptions for each song below.

In about the third week of lockdown my girlfriend at the time (who is still one of my best friends) had finally returned from touring and after being quarantined on her own for enough time she is came to stay with me for about a week. I guess I was really starting to lose my mind because this song – which I hadn’t heard since I was probably in college and which seemed to be the absolute antithesis of our reality – came to me one day at mind and didn’t want to leave. I started playing it one morning when I woke up and we both thought it was hilarious and also terrifying. It made me feel like Patrick Bateman wielding an ax listening to Huey Lewis, completely off my rocker and leaning into the absurdity and horrors of reality.

The lyrics (“The sun is up / It’s a little after 12 / Fix me breakfast / Leave the job to someone else”) also reminded me of how much pop culture has a completely different value system in 2001, and I wonder how things like that play out in our current reality. Completely crazy pop, but also banger. Cheers to the Revenge of a Blonde soundtrack.

Andy Stott, “That Should Be Us”

I discovered Andy Stott around the time I started doing Barbarism. One of my favorite things about his work is his ability to find rhythm in the repetition of a sample that might sound like nothing more than accidental vocal text on its own. The little “uh-huh-ha!” the sound of this song is fascinating to me, and there is something very aggressive about the sound of the air pump that gives this song so much texture.

Björk is one of my favorite artists of all time, and Vespertine is a record I come back to again and again. I hear new things every time I listen, and the intricacies and eccentricities of the production choices are constantly inspiring when trying to paint a very specific, weird picture with sounds. The lyrics to “It’s Not Up To You” felt like a resonant mantra during this time in my life when I was trying to learn to stop fighting battles that can’t be won (against myself, against aspects of the reality I had to accept, against a global pandemic, etc.).

I love this song and I love how Kim delivers the vocals on this version. There’s something so exciting to me about what a lot of people consider to be poorly recorded music. It sounds like it was recorded at a karaoke stand at the mall, which might not be interesting in a different context. But band Sonic Youth release a noise record where they take the last name of one of the world’s most famous pop stars and pepper it with occasional pop covers with canned synthesizer horns and backup vocals. pre-recorded songs that move my mind in all sorts of directions. And my body too! Because I want to dance to it.

Chief is my favorite Magik Markers disk. I like the way Elisa Ambrogio plays the guitar. I saw her once dragging the instrument around on stage like she was dragging someone by the hair.

For me, it’s one of the greatest pop songs of the last 25 years. I got stuck on “Dreamt I Talk to Horses” and started getting distracted on the internet. I found a production tutorial class where you downloaded a MIDI pack of “Heartbeats” and sort of reversed how they arranged and mixed the song, and that exercise is a big part of why the song sounds like she does rather than somewhere in the middle of Spacemen 3 turning into Spiritualized VU covers.

I’ve been a fan of Meg Remy for over a decade and feel inspired by the continued evolution of her sound with US Girls. I was walking around when I first heard this song and I literally stopped in my tracks, I felt so captivated by it. It’s so simple and so heartbreaking. Sometimes when I felt unsure of the approximate sound I was looking for on BarbarismI was listening to US Girls to remind myself of the power of choosing sound elements that don’t sink easily.

I wrote a bit about how some New Amerykah Pt. 1: World War IV abstract inspirational elements of Barbarism for Talk House. I think the first track on the album most directly inspired “Flag Wave Pt. 1” and “Flag Wave Pt. 2”, but this song is one of my favorites. I love what Madlib has done with the production. I like songs that are an ode to the love of music, both on a personal level and in a global sense.

I go back to Bruce Springsteen for inspiration as much as I go back to Björk. It is, for me, the perfect pop product in that neither artistry nor substance is compromised in the way they work together. This track was always kind of forgettable to me until I heard it in the hallway of a nightclub soft launch. The building was unfinished and they had a jukebox in the hallway before you got to the dance floor, and this song came perfectly in time with me walking down the hallway, and the strange reverberation of that empty space unfinished traveling down the hall to me felt so strange and provocative. The snare was so much more relentless and violent, almost industrial. It was a few months before the pandemic and maybe because it felt like a serendipitous foreshadowing, the moment lodged in my brain as I was writing the record.

What is tonight for eternity is a disc with an absolutely tortured sound, and also soaked in a strange psychedelia. I love how the guitar sounds throughout, and I love how the woman sampled towards the end of this track sounds off balance. I’m not saying that in a voyeuristic way. She kind of reminds me of how David Lynch will take the most horrific feelings that exist deep within a human psyche, those that don’t necessarily have literal meaning, and bring them to physical life with his films. You probably can’t understand much of what the characters are going through in a movie like Mulholland Drive Where lost highway Where blue velvet but somehow, to me at least, their emotions still feel terrifying, like an exorcism of what can’t always be processed otherwise. This track is a bit like that for me too.

I started listening again Person location a lot during the quarantine, probably for the first time since its initial release. I’m really inspired by the vastness of what Noah Lennox has done with what was probably just a sampler. This song is so beautiful to me, and as if that weren’t enough, there’s the unbelievably creepy creepy dread with the way it ends. I still see this song so clearly in my head when I listen to it – it’s very cartoony and idyllic, and then this huge void of black cloud comes to swallow its whole world. Strongly contrasting elements like this are incredibly compelling to me in music.

Another loop-based masterpiece that I found myself revisiting during lockdown. They’re like pop songs to me – they get stuck in my head and have an emotional resonance, even if they’re not really explicit. I love collages. I like what can be created from recycled elements, and the idea that the meaning of a sound in a context – say, the woman singing that commercial jingle on a 70s toy – is totally stripped of its original meaning in the hands of a brilliantly expressive artist like Dilla. I also love that you can listen to this record and know nothing about the person who made it, and why they made it, and love it, or you can read a lot about the history of J Dilla and learning that it’s actually a really heavy record about someone dealing with their own mortality, and making it take on all kinds of meaning.

Les Rallizes Nudés, “The Night of the Assassins”

I love distortion. I wish I had a giant Crayola box, but instead of colors it was just a collection of all my favorite distortion sounds. Les Rallizes Dénudés produce some of the best and most over-the-top guitar distortion I’ve ever heard, and that’s rock and roll, isn’t it?