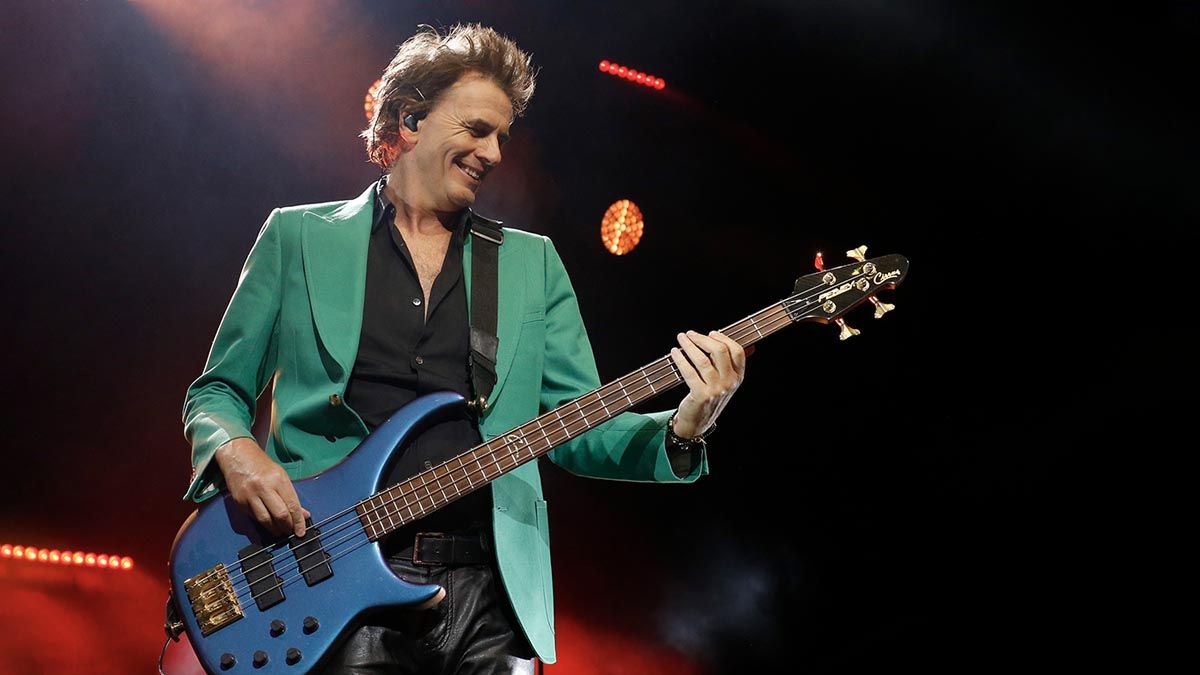 John Taylor: “Energy is my domain – it’s transmitted through bass and drums. It’s my job to bring as much energy as possible to this atmosphere.

With over 100 million albums sold over his 43-year career, Duran Duran could very well have retired to his own luxury island decades ago. Instead, they’re still creative, still touring, and judging by their new album, Future Past – still full of energy.

Bassist and founding member John Taylor was inspired by both disco and punk rock, and imbued Duran’s many hits with a range of supremely smooth and effortlessly funky bass parts that have gone down in DNA. of our community.

It’s high time he received this award, not least because he made it clear that bassists can be both the hottest and coolest members of a band. Of course, we already knew that.

It is with great pleasure, John, that we present to you Bass playerLifetime Achievement Award.

“Wow! That’s adorable. It’s kind of surprising, and absolutely fantastic. You know, I’m constantly going back and forth between feeling like I’m really on top of playing bass and feeling like I’m so in I don’t think any of us are the player we’d really like to be, but you meet each day as a musician as best you can, with the best version of yourself available that day- the.

We enjoyed the series of bass videos you made during the pandemic.

“Yeah! I never really thought about doing a tutorial of any kind, but it was mentioned to me, and I was like, ‘Well, if I’m going to do that, it’ll be less on the technique and more about storytelling”. So I did it from the perspective of how a Duran Duran song is written.

“I’ve been lucky in that my musical journey has really been about writing songs in a band that thinks a lot about its musical architecture. As much thought between the sound and the production of the song as the melody and the lyrical content.

Where does bass fit into this process?

“I wonder where the bass is going and what its presence is going to be. I think about what the style and sound will be like, and I have a team of people that I work with that really encourage me. We all think of ourselves as progressives, you know, so we’re all looking for new ways to express something that’s not too far off from what we’ve expressed our entire careers.

Is good technique important to you?

“Obviously, technique is super important, and when you’re alone and not working, you can work on your technique all day. But if you find yourself in a creative ensemble situation and need to find a part that works with a bunch of other musicians’ parts, the conversation is about what we’re trying to do here.

“I also have the chance to play with an ensemble that loves to jam. We do a lot of sketching – we did weeks of sketching for this album. They just piled up. I could come up with a new groove idea every few hours.

“The second stage starts to organize these ideas, and with each stage we get a little more under the microscope. Sometimes my parts are over, and we still don’t know what the song is about. We have a very strange way my parts could be done, the bass could be followed, sounding beautifully, and it could be months before Simon [Le Bon, vocals] comes and says, ‘I understood what this song was about.’

“The last time I used the Aria was on our reunion tour in 2001 I think. I thought it would be nice to bring it back for a few songs like Record a prayer. A few years ago we considered doing an updated version of my signature model, but it just didn’t work out.

“You know, when I found Peavey, I felt their Cirrus bass was really doing everything I ever got from the Aria. The people there were really there, and they were very generous , so I didn’t really need to go back to Aria.

“I also think your body shape changes a bit over the years, as does how we relate to the instrument, and I actually found that when I put on the SB-1000 or the SB- 600 felt a little heavy for me. I don’t like to switch guitars during a gig, because I like to find a sound that works and stick with it. I still use amps too Trace Elliot.

We’ve seen you play on a Dingwall lately.

“I’m all over the Dingwall. I’m in love with this bass! I was in Toronto four years ago with a friend, and he said, “You should try a Dingwall,” and he showed me one of their basses on his phone. I was like, ‘Holy shit, this is beautiful.’ And I said to Bernie Guerra, my technician, “You have to reach out to these guys.”

“Sheldon Dingwall is amazing. He’s a real visionary, I think, and everything I’ve used from him has been really great. On the new album, I had a single-pickup bass that I used on most songs.

“While rehearsing for this tour I had a dual mic Dingwall and found it to be much brighter, with a graduated dynamic range, and before I knew it I had a three mic which was even wider. I kind of bounced between those three, and I’m really having fun.

How do you get along with the vented frets?

“I love it. I haven’t had a problem with it at all. It felt so intuitive from the moment I picked it up. I was almost like, ‘Wow, why all the Aren’t guitars like that?’ I don’t have particularly big hands, so it was like a three-inch heel on a five-foot guy. It just felt nice.

Duran’s new album has so much energy. It’s so focused, and it sounds really good.

“I appreciate that, really, because I think the energy is my department. It’s laid down by bass and drums in the opening sequences, when we’re setting the tone and setting the mood. That’s my job to bring as much energy as possible to this atmosphere.