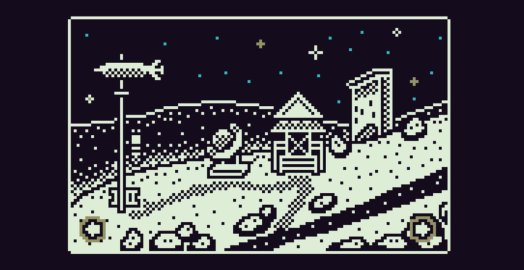 Antarctica has always been a fascination for me. The only continent on the planet where humans had never established permanent settlements until recently, it is a massive, largely untouched landscape filled with natural wonders. Under the Antarctic Treaty, countries can create research posts, but cannot claim the land as their own, nor use it for military purposes. So despite the dangerous conditions, scientists and explorers from all over the world come together, cooperating towards a common goal, depending on each other to survive on the mysterious frozen continent.

Imaginary is the semi-fictional story of a young man working as a technician on an Antarctic base. The game draws on the first-hand experience of one of Orbis Tertius Games’ co-founders, guiding players through a routine small camp security check. It’s a fascinating snapshot of life below zero, chronicling the loneliness and banality of living in such a secluded place, while describing the beauty of this strange land. It’s just a snapshot – a short story at most, with a decidedly minimalist aesthetic. Yet in its brief runtime, the narrative effectively communicates a real slice of life that most of us will never experience.

The word “Imaginaria,” as the unnamed protagonist states in the game’s opening, comes from a Latin term representing both the night watchman and the night watch act. You play as such a night watchman as you prepare for your titular duties overnight at a remote science outpost. Several buildings must be checked to ensure they are not on fire – a real concern in Antarctica, where any loss can be catastrophic in such a remote location. It might sound trite, but it’s a smart and efficient way to show players what life is like on base, with your character’s comments conveying information about each building as you go on patrol.

Presented as a slideshow, the game can be fully controlled by mouse, clicking environments, and dialogue, although the space bar can also move conversations forward. You start in the protagonist’s current dwelling, a small dome-shaped fiberglass shelter. Here you pick up the necessary equipment for traveling outdoors (boots, jacket, etc.), getting a brief summary of the importance of each item. You will also get a lot of secondary details that are not essential to your Imaginaria tasks, such as why so many windows are covered in cardboard.

There are five buildings you must check out on your tours, although there are more than twelve to visit in total, including science labs, housing structures, and shops, to name a few. some. The five required sites are listed in the main building’s logbook, but until you know where those places are, you’ll be exploring all available avenues anyway. You can search for them in any order you like, but some areas are locked until you get important items, like a key to operate the snowmobile needed to reach a handful of distant places. The patrol is quite mundane, none of the buildings are on fire (sorry for the spoiler). There are also no shady secret experiments going on here, nor alien contaminations to uncover. Instead, the game becomes more of an interactive tour, letting you click on different objects at each location while the protagonist shares anecdotes about them.

You have the opportunity to meet several other characters at your own pace, each offering a better insight into the social structure of the outpost. A friendly scientist in the lab next to your accommodation, for example, asks you to raid the kitchen while you’re outside and bring him some of the “goodies” (i.e. food. over four years old), and you can decide what to earn from several different items. Your choices in the few seemingly unimportant questions like these don’t change the world, but they do offer some insight into the impact they have on the lives of people in such a small, remote community. You’ll learn that the team’s day-to-day problems aren’t so much about freezing the cold, but more about the challenge of staying busy through the perpetual night. The protagonist recounts things like being tasked with hosting a movie night but stopping after interest wanes, in part due to an overly eclectic film choice.

Food is heavily rationed here and has expired often, but it’s just an accepted part of basic life. However, the team must deal with more gruesome issues, like when one of the researchers died and his body had to be stored in the freezer until the next ship arrived. The cook refused to go into the freezer the entire time the body was there, meaning the camp had to rely solely on canned food for that stay. While there aren’t any plot twists, or even a particular climax, the individual stories told are often intimate, depicting a day (or night) in the lives of single people making the most of it. their time.

Imaginary adheres to a pseudo 8-bit graphics style, with environments and objects composed of black and white pixel art, with the night sky providing the only limited source of animation with its twinkling stars. Arrows indicating where you can move are installed on the screen, and objects you can interact with are highlighted when you move the cursor over them. The pixels are large, and the gaming area is quite small, confined to a central square with large borders on both sides, although none of the hot spots are difficult to discern. Some can be mysterious until you click on them, but it is never a stretch to see what block constructions are meant to represent.

The first person point of view certainly works to immerse you in every scene, and the feeling of loneliness is maintained even when you meet other characters, who are not shown in the game. On the contrary, the text that s’ performs at the base of the screen communicates when they speak while the backdrop remains unchanged. The Game Boy-esque look and deliberately reduced screen area also nostalgically played on my childhood memories of sitting in the backseat of a car on long drives, trying to entertain myself with a handheld console. . It’s a clever use of the minimalist visual style, channeling the same stifling sense of boredom through long periods of loneliness the protagonist must be feeling.

The game doesn’t have a map feature, and while it’s hard to get lost in a handful of places, using the arrows to travel between areas sometimes flipped me, wondering if I went “in”. down “or” to the left “to reach a certain place, eg. Other than the logbook in the main building, there is also no visual record to refer to regarding any buildings you have inspected or have yet to find, which caused me to wander for about five minutes towards the end of the game, trying to figure out what I had missed.

While the main focus of the game is the checklist of the buildings you need to patrol, there are a few little puzzles along the way, although to call them that is a bit of a stretch. It’s more in the spirit of collecting items as a way to progress to new parts of the base, like the aforementioned skidoo key. Once you’ve gone through all the required areas, you can return to your accommodation, prompting the game to end. From start to finish, the experience took me just under forty minutes, but a few selected choices could provide a reason to replay the game, even if the reward is just a handful of new lines of text.

The majority of playing time is marked by melodic guitar and piano tunes, while subtle effects like wind and the crackle of ice over a body of water can sometimes be heard outdoors. . Coupled with the austere monochrome palette, the game exudes a sufficiently cool, yet comfortable aura. There is no voice, although the text is accompanied by typing effects as it appears.

There is no tutorial, and it was only after the fact that I found out that there appears to be a save system (the game has options to continue or to start a new game at startup). However, even then I wasn’t sure how to turn it on, so presumably it’s an auto-record feature that records itself at different times. Imaginary is so short that I completed it in one sitting anyway, so it’s not much of a commitment, but it’s weird to leave basic user-friendly functionality a mystery. I encountered a few other quirks while playing, like not being able to use F12 (in Steam) to take screenshots. I also had to ALT-F4 to exit the game, as the end screen did not prompt for any exit.

Imaginary is both an educational and immersive look at the often mundane life of those who brave positions in one of the most remote places on Earth. It could easily have been too calm, too boring to care, but the writing is effective, giving the protagonist just enough personality to make the affair feel like an interactive tour, while not being so overbearing as players cannot project themselves into the role. The artistic design is sure to evoke a sense of nostalgia among longtime gamers, while effectively creating a sense of extreme cold, darkness and seclusion. There isn’t much of a challenge and the playing time is very short, but if you’re okay with playing a more or less linear visual novel, the game is sure to instill in players the same feelings as the developer experienced it when stationed there.

Imaginary is available on:

We receive a small commission on any game you purchase through these links (except Steam).