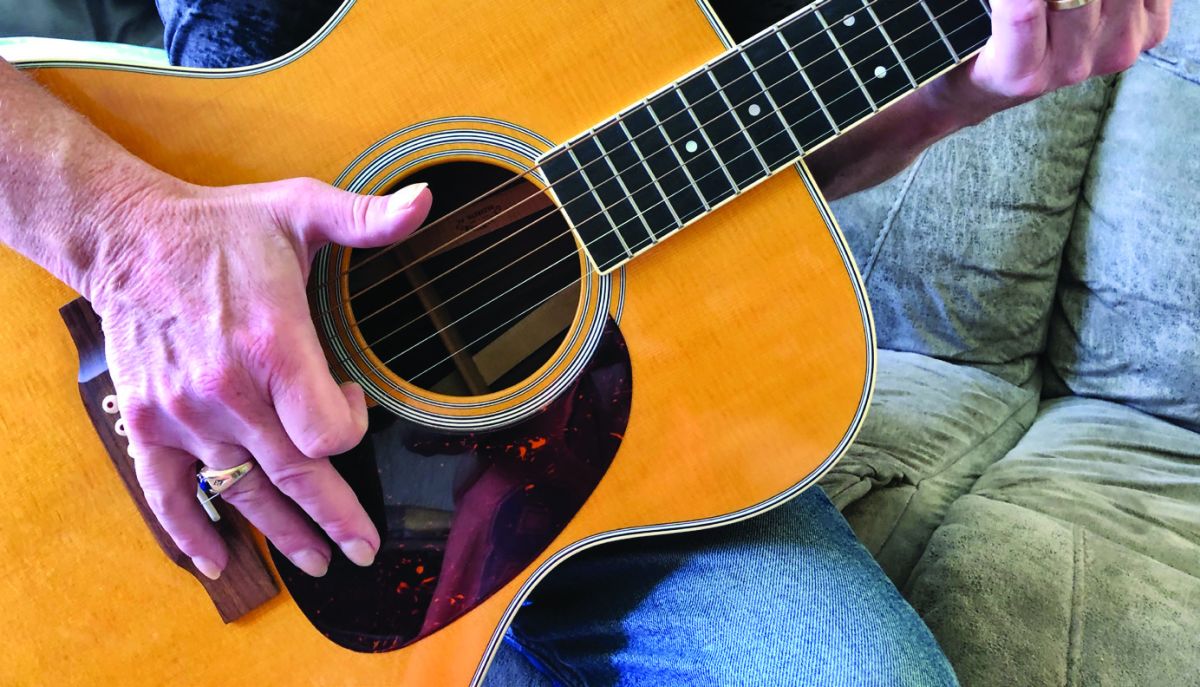 There is nothing more rewarding than when technique and art come together in creative ways. Interviewing players from across the musical universe for 20 years has provided me with unique opportunities to learn from some incredibly artistic technicians, and over the past half-decade I have channeled the lessons learned into the debut album of Spirit Hustler.

Learning fingerstyle slapping and plucking was a fundamental breakthrough that led me to a lot of the most interesting elements on the album. I can’t think of another player who does exactly that, so I’m happy to share this revelation with you.

I started playing with the slap-and-pop technique by copying funk-bass licks on the guitar, which is a great way to start. Acoustic offers more punch and room to operate, so is generally better on an acoustic guitar than on an electric guitar. Just use heavy strings and focus on the last four.

The basic approach isn’t rocket science: Stick your thumb out like a hitchhiker and shove the knuckle down on one of the two lowest strings. Then pluck up with your index fingernail to grab the notes on the third and fourth strings. Once you have that under your belt, start incorporating the top two strings into thumb and trigger finger pinch patterns.

I found inspiration to dig deeper working alongside “spanking guitar” maestro Jude Gold at generalist and interviewing funk bassists like Fishbone’s Norwood Fisher and Larry Graham – the root of all “thumpin’ & pluckin'” – for Bass player. But interestingly, it was the acoustic players who helped close the deal.

During a NAMM jam with artists from Santa Cruz Guitars (including James Nash) who used flatpicks and fingerpicks, I realized that my freehand fingerstyle wouldn’t compare unless I had false nails, and it was a game changer to always have a hook ready to grab those top ropes. The technique is unwieldy at first, but once you get the hang of it, the flow becomes almost automatic. All sorts of new ideas open up, especially in open tunings.

See the accompanying video tutorial above and listen to the Spirit Hustler album for examples such as pre-choruses on “Circlin’ the Sun,” covered here last month.

“Angels of Summertime” is another song rooted in fingerstyle, which includes a cameo from Christie Lenée. You might not think a slap-bass inhale would lead to a sweet ballad, but that was the basis of the main part. This versatile technique is also the backbone of the American-style stuff on “Hard-Fought Magic” and “Honey Moon” (featuring Nash on mandolin).

It is best to focus the technique on a small range of motion when recording. Instead of using the top of the neck as a springboard, which can be useful and fun on stage, keep the plucked hand anchored on or near the bridge in the studio. The tone is deeper and more coherent.

Position the pickup away from the soundhole, placing it under the bridge and slightly toward the hairpin on the bottom side. Ribbon mics work best. We used a pair of vintage Coles right next to each other. You can hear this tone at the top of “Angels of Summertime”.

The key elements of a good slap acoustic guitar include full scale length, robust bass, and quick response to fast attack. The best I’ve found is a Martin M-36. The 0000 body style is basically a jumbo OM, and it has such a snappy, bass-like response that I call it the M-Bomber. He is featured on “Angels of Summertime”.

The setting is E modal, which goes, from bottom to top, EBEEB E. See last month’s column for more details on this setting. Have fun learning fingerstyle slap. May it inspire exciting new riffs and licks that lead to exceptional songs.