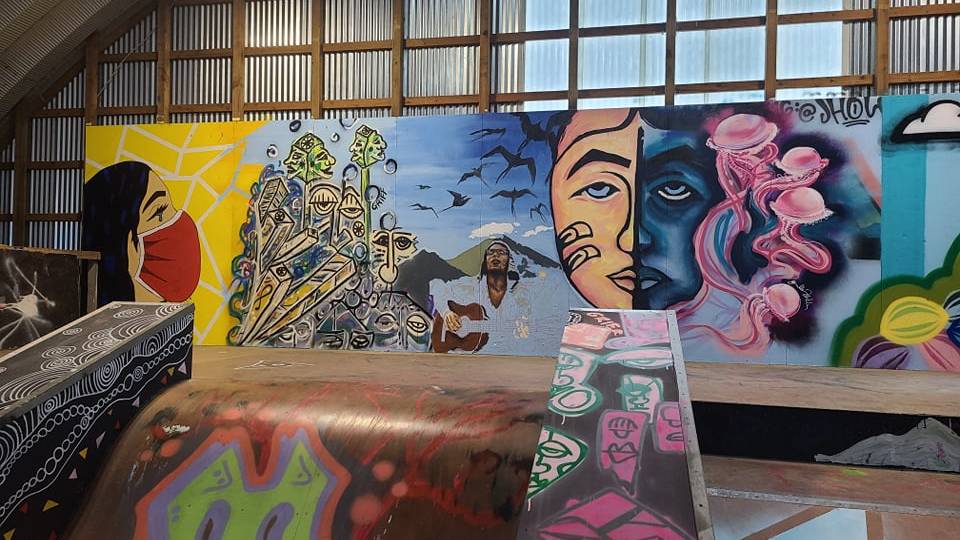 There was palpable excitement in the air, as students, families, teachers and friends gathered on a cool fall evening to view the Haines Art Students’ Skate Park Mural Project. There was food, music and catching up, as it was also one of the first community events since a recent wave of COVID last month.

â€œIt’s so sweet. I’m so happy that people are coming here to see our pieces,â€ said senior Trygve Bakky, looking at the large indoor skate park, as the skaters navigate and the younger ones play on the ramps. .

â€œWe have been working on it since the end of August, the beginning of September. This was a full course that we all took, sort of outlining the process of distributing artwork via graffiti, and how we do it legally? You know, write a proposal to the borough, kind of explain what we were doing, â€Bakky said.

The class, led by art teacher Giselle Miller, and assisted by local artist Jeremy Setem, involved developing proposals with designs and budgets submitted to the borough. They studied the history of graffiti and street art, painting and spray painting techniques and the execution of their ideas.

Now the walls and railings are adorned with distinct colorful paintings in different styles and sections.

â€œI worked on painting the universe there, it was a lot of fun,â€ Bakky said, gesturing to a large ramp.

Next to the orbiting planets, there is a large shape-line killer whale. This is one of the many works of art that was there before that have been incorporated, such as a multi-colored face painted by a young Haines, Mario Benassi Jr., tragically died in river accident in California A few years ago. There is now a new mural of Benassi next door, singing and playing the guitar.

Freshman Hayden Jimenez once said the skate park is kind of forgotten. There was garbage and a lot of penis drawings. It might even be intimidating for some. Now, he says, it’s a lot more fun.

â€œBetter energy in general from the skatepark,â€ Jimenez said. â€œYes, there are some pretty cool and talented artists and artwork. “

On one wall is a striking woman in profile, wearing a mask, shedding a dark blue tear.

â€œI really love pop art, so that’s the inspiration for it,â€ said Aubrey Cook, the senior artist. She reflected on what it was like to exhibit her work in a public space.

â€œI think it was so cool, I’ve never done that kind of piece. Especially so big, I’ve never done a piece this big, â€Cook said. â€œIf you had been here before, it was just a bunch of graffiti all over the place, with inappropriate things, but now it’s like a really nice space. And we’ve all learned that it’s a living, breathing space, which means it will eventually be covered by other people’s artwork, but we’re really grateful that we had this opportunity to to paint.

And it was a hard lesson. During the course project, some rooms were partially vandalized and had to be repainted. Art teacher Giselle Miller said there had been an apology and the class addressed the situation together.

Miller said she was incredibly proud of their personal and artistic growth.

The community can now view student artwork at the Haines skate park.