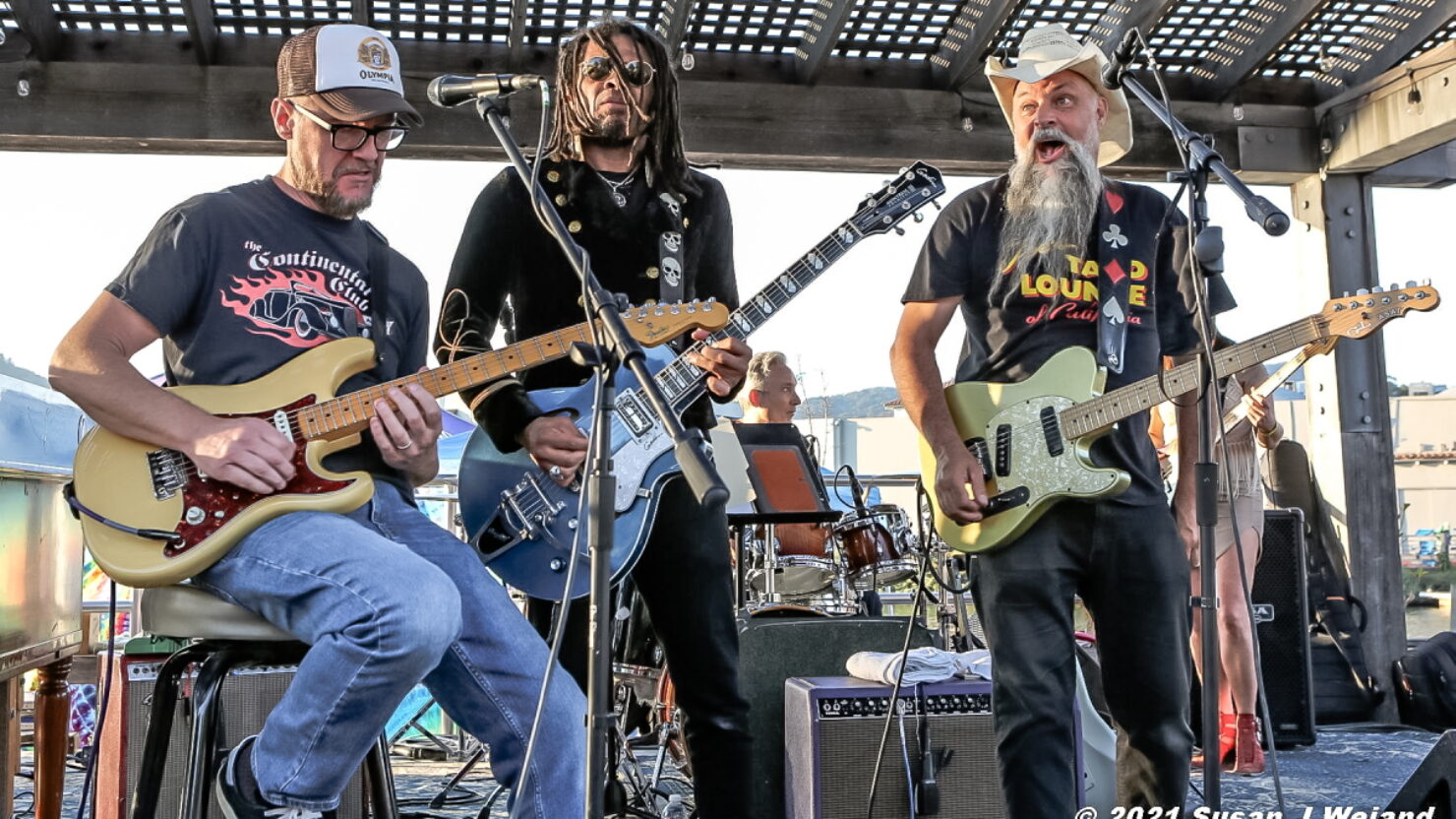 On a warm and sunny Sunday afternoon at Terrapin Crossroads in San Rafael, Calif., The annual Guitarmageddon Gathering came together to celebrate the guitar playing, music, life and influence of Jimi Hendrix. A modest, half-capacity crowd gathered to witness what would be a day filled with impressive renditions of classic songs as well as a set of aggressive takes on less familiar Jimi material, released posthumously.

A wide range of some of the best rock musicians in the Bay Area have come together for this celebration. Of those assembled, two of the more familiar Terrapin Crossroads regulars included Roseau Mathis and Justin purtil. These two string wizards are locally renowned for playing bass guitar, Reed with everyone from Billy & the Kids to Steve Kimock. Reed and Justin both performed extensively in support of Stu Allen. While Reed played funky, upbeat bass in the first set of the day, he took over the musical direction of the entire second set, which featured Hendrix’s posthumously released music. Much of this was generally familiar to enthusiasts, but less so to the casual fan.

Before going any further, it is essential to give huge props to the singer, guitarist and music director. Sean leahy who is the organizer, the spirit and the energy behind Guitarmageddon. Without Sean, this event would not exist. Aside from his preparation, production, cat wrestling, and marketing efforts, he did a remarkable job of moving the event forward, while playing his hindquarters. At the start of the event, Sean took a moment to explain that the first set would cover the three well-known and loved LPs that Jimi has released in his lifetime: Are you experienced (1967), Axis, bold as love (1967) and Electric Ladyland (1968). As previously stated, the second set would be the most unique and unfamiliar material released after Jimi passed away.

The event opened with striking renditions of “Purple Haze” and “Red House” delivered by Leahy alongside Jimmy leslie (a diligent singer and guitarist and writer for Guitar Player and Bass Player magazines), and Byron rhynes (Smoke Daddies.) Each in turn threw fiery leads, which aroused the audience and established a powerful and emphatic foundation for the day. A large set of intensely searing exchanged solos accompanied Rhyne’s ballsy vocal performance on “Red House”. Scott Guberman – a face, name and sound familiar to many at Terrapin for his consistently excellent work alongside Phil Lesh and Stu Allen (among others) sitting on B3 and making sporadic but regular appearances throughout the show.

The bass rights for much of the first frame have been maintained by Mike pascale, owner, operator and chief engineer of the Fat Jimmy Amplifier Company; so his skills were solid and his bass was huge. On drums from the start was Brian Fischler who did a great job emulating Mitch Mitchell.

â€œManic Depression,â€ wasn’t a frustrated mess. Alternatively, it featured fierce guitar fireworks between New Monsoon’s Jeff Miller and Derek keith brooker by Ten Foot Tiger. A slightly calmer forehead appeared on Jimi’s “May This Be Love”, with a vocal performance from Paige Clem, a great solo singer / songwriter from nearby Mill Valley.

Philbilly Milner – currently serves as guitar electronics assistant for SF Guitarworks, a veteran of local bands Too Many To Name, provided heartfelt and genuine vocals as well as fierce guitar work on “Are You Experienced”, with the talented and crazy Bryan kehoe (Duo of Twang w Les Claypool) struggling and riffing on his G&L Telecaster. This segment also brought the drummer Michael Urbano to the scene which showed a deep familiarity with the material. Not surprising given that he has performed or recorded with a who’s who of musicians such as Smash Mouth, Sheryl Crow, 3rd Eye Blind, John Hiatt, Todd Rundgren and more. This cohort nailed “Si 6 was 9”, with impact and authority.

Singer teal Collins brought the audience a bit of “Spanish Castle Magic”, with Leahy, Kehoe and the technically brilliant Josh zee (Phantom Power & the Mother Truckers) on guitars. Teal brought a lot of emotion and drama to his performance and stood out with his positive and exuberant vocal vibes.

“Little Miss Lover”, by Axis, brought the vibrant Pamela Parker to the scene with the aforementioned Purtil. Both tore it apart with formidable and distinctive solos.

Mathis was a longtime member of Tea Leaf Green. His TLG group mate, Trevor Garrod, walked over to the Hammond B3 and sang soulfully while doing a terrific and funky rendition of “Them Changes”, with Justin and Pamela exchanging more solos.

Pascale traded her bass for a Strat to play and sing “Hey Joe”, with the slide guitarist Steve pile and clean TXR Brian Rashap (from The Mother Hips and the Terrapin Family Band) taking over on bass, Garrod at B3 and steady rhythm guitar Leahy all contributed to a completely muddled take on this all-time classic. The â€œsofterâ€ side of Jimi’s repertoire was delivered by Pile with his rendition of â€œThe Wind Cries Mary,â€ which featured his artful slide solo. Guberman on B3 was also present for the remainder of the first set.

The end of this image was an in-depth medley of three great songs from sides three and four of Electric Ladyland, Jimi’s 1970 opus, released just before its release. “Rainy Day, Dream Away” -> “1983 (A Mermaid I Should Turn to Be)” -> “Still Raining, Still Dreaming” was an ambitious suite of songs to tackle, but the main musical storyteller of the day, Sean Leahy , did a wonderful job delivering the goods. With the competent support of bassist Rashap, drummer Blake ritterman (from the Monday Night Band), Guberman on keyboards and the incredible â€œWonder-Twinsâ€ on guitars: Benjamin andrews (Con Brio) and Ben misterka (de CollectivitÃ©) who shredded these arias with intensity, elevation and notable technical virtuosity.

After a brief intermission, the second set under the musical direction of Mathis on guitar, began with the Gypsy bandthe jewel of “Izabella”. The strong vocal talents of Elise testone, which Mathis said had just stepped off an East Coast plane, were a major feature of the second frame set. Elise, although unknown to the public, was a season 11 American Idol finalist. Elise’s voice came through the mix, and her confidence and stage presence was strong despite not sounding familiar with much of the material and using a mounted cell phone for vocal cues. His voice and presence still skyrocketed.

Angeline Saris (another musician from too many bands to mention, but she’s supported Narad Michael Walden, Carlos Santana and many others) displayed immense and intense groove and power on bass guitar.

The former member of the TLG group of Mathis, Scott rager sat on the Drum Throne throughout the second half and brought stability and energy to this less familiar Hendrix material.

With Reed blazing awesome melodic streaks on guitar (what does a sick bass player like this kill on lead guitar?), The set has been augmented on each track by well-distributed placement. guitarists already mentioned. â€œStepping Stoneâ€ featured an excellent Brooker solo. Leahy stepped in for “Hey Baby (New Rising Sun)”, a song written and recorded from the posthumous second album, rainbow bridge, released in 1971. “Dolly Dagger” and “Earth Blues” let Andrews tear it up to an impressive degree. “Roomful of Mirrors” from the 1971 LP To live (released in the UK) allowed Zee to display his intense technical abilities on solo guitar.

Purtil returned to tackle the tracks of “Drifting”, from the 1971 LP cry of love, a collection of songs that Jimi was trying to record and produce just before he passed away. Very furious lead guitarist Ben Misterka covered “Freedom”, also from cry of love.

The final two songs in this adventurous ensemble featured the deep guitar talent of Eric McFadden (EMT, George Clinton and the P-Funk Allstars, Stockholm Syndrome and many more). Eric always brings his A-game to the stage and this tribute appearance was no exception. Testone, confidently delivered the beautiful song “Angel”, with a terrific McFadden melodic break. A similar, but more aggressive effort came in the form of “Ezy Rider”.

The reminder of this special tribute to Jimi Hendrix featured a pair of musical exclamation marks. Presenting the first of two selections, Milner thanked all the musicians as well as the audience for their support. Special guest, New York-based singer-songwriter Kate Vargas stepped in to sing a verse and play a powerful solo alongside flamboyant stabs from Milner and McFadden to “Little Wing,” as the show’s penultimate statement.

The last track of the day was an oversized and ridiculously sick screening of “Voodoo Child (Slight Return)”. Milner, in introducing it, suggested that “this is what it is about”, before giving way to what McFadden called “the good, the bad and the” fugly “, in the form of himself, Kehoe and Zee, each of them hammered it while delivering overwhelming solos with inordinate intensity and brilliance.

The musical statement made by all of the Guitarmageddon attendees seemed to be “if we don’t meet you in this world anymore, we’ll meet you next (and don’t be late!)”

Guitarmageddon provided a well-deserved opportunity for many talented Bay Area artists and even a few distant musicians to show off their talents in front of a live audience, in an outdoor setting at the still insecure edge of the COVID-19 era. For some, it was probably the first time they had played a concert in over a year. Either way, this formidable assemblage of artists will all deserve your attention in the future. Keep your eyes and ears open for future dives into the abyss of rock ‘n’ roll spirit and essence as delivered by Sean Leahy and Guitarmageddon!