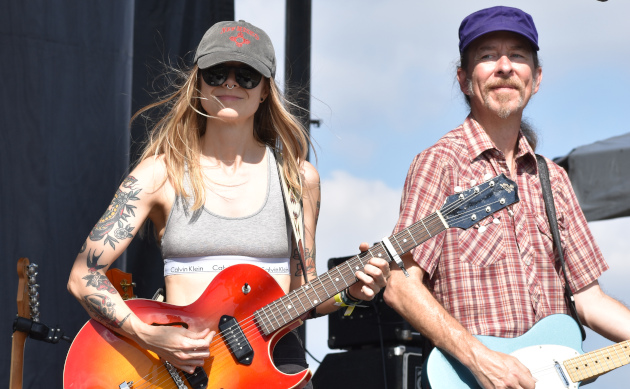 Guitarist Eric Peterson has been Sarah Shook’s right-hand man for nearly a dozen years, first playing a gig with her on Halloween in 2010, and since then following her on numerous projects and being a founding member of The Disarms. But after this weekend’s shows in Savannah and Atlanta, Georgia, Eric Peterson will take time off from the band to deal with a lingering health issue with his right arm that’s affecting his ability to play.

“Eric and I have been close friends and steadfast bandmates for over 11 years now and I think I’ve only played one gig without him in that time,” said Sarah Shook. “We’ve been through a lot together and it’s hard to even really process at this point. This is an unexpected and painful situation and we would like to thank you all in advance for your grace and understanding during this time.

Peterson followed Shook through his previous bands The Devil and The Dirty Hands as lead guitarist. He had also been a member of the Chapel Hill-based rock band The Kamikazees, notable for being one of the early projects of Dex Romweber who went on to form the Flat Duo Jets, one of Jack White’s main influences.

Eric Peterson was an early believer in Sarah Shook, convinced that Sarah could be a musical force beyond Chapel Hill. It was under his pressure that she formed The Disarmers, and recorded and released the first album Oblique. Sarah Shook and the Disarmers just released their third album night owl on February 18, and are now on tour behind him (see dates below).

“We remain hopeful that we can find a solution for Eric and that he can join us in the not too distant future,” Shook said. “And we have talented and brilliant sub-guitarists lined up for the duration of this period, so please make them feel welcome when you see them here or on stage. Until then, we love you, thanks for being there, and we’ll see you on the road soon.

27 May – The Southern Cafe and Music Hall – Charlottesville, VA

Keith Richards and The X-Pensive Winos: the singer joins the group after 3 decades