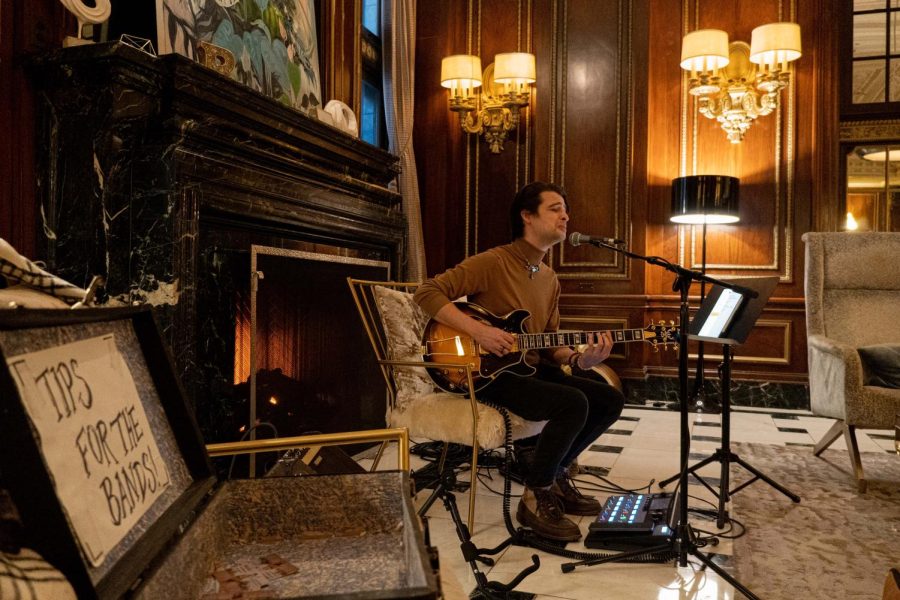 The Blackstone Hotel lobby serves as a unique and relaxed setting for anyone to enter and enjoy live music performances.

But three days a week, Columbia students can feel even more at home in the lobby, as it’s their peers who take the stage for three-hour sets.

Professors from the music department select several students to perform in the hotel lobby, 636 S. Michigan Ave., every semester, as the three-hour performances require a committed skill set.

The Blackstone has been collaborating with Columbia since 2018, creating a space for student musicians to play live music in the lobby lit by the hotel’s chandelier and fireplace.

“There are so many gigs by solo musicians that it’s important that our students can enjoy this work,” said Joe Cerqua, creative director and producer in the music department, who manages student talent affiliated with the hotel.

The hiring process for this position requires students to demonstrate an impressive commitment to the music program. Each performance consists of a solo act, which is a paid position with tips. Cerqua programs the artists for two months a moment, offering opportunity for others and plans to run the program throughout the year. There are currently three student performers and one alumnus.

“The gig at the Blackstone is a three-hour gig, so it’s mostly about who can do a three-hour gig on their own,” Cerqua said. “Since seeing all the concerts in the music department, I have been in touch with the talent of our students and we are looking for students who we believe can put in a long performance at a professional level.”

Well known for its history of hospitality immersed in the arts, The Blackstone Hotel has focused on creativity since its opening in 1910. “Jazz Showcase”, one of Chicago’s oldest jazz clubs, was founded in 1947 and resided at Blackstone for 14 years before moving to other Locations. While the jazz club is no longer in its original location, the hotel has no away from his musical roots.

Pierre Giacotto, General Manager of Blackstone, strongly believes in the importance of integrating and maintaining music in the hotel.

“Part of bringing back history was bringing the art of music to our guests, and what better partnership than with the neighboring school,” Giacotto said.

Former musician Eric Rutherford, who earned his Bachelor of Music degree in 2017, maintains his close connection to Columbia by playing one night a week for the hotel.

Jazz guitar and jam on funk loops, this is how Joshua Trimble, a senior music major, spends his three-hour performance at the hotel.

“I think this opportunity is really a springboard for a lot of things that I imagined and wanted to manifest for myself,” Trimble said. “It’s given me a really good outlet to make sure I keep doing my solo artist stuff in the craze of just trying to finish school and survive the light onslaught of all the responsibilities of life. life.”

Trevor Stewart, an elder The composition major is another of three student musicians performing live. Specializing primarily in songwriting, Stewart wrote his own music for various bands, but diversified his talents at Blackstone.

“I play pretty much half classical guitar, half contemporary music with vocals,” Stewart said. “I play The Beatles a lot, and Al Green’s song ‘Let’s Stay Together’ is really fun. I try to play music that any demographic can enjoy, there are people from all over the world at the Blackstone.

Miles Pretel, a sophomore at Columbia majoring in contemporary jazz and popular music, plans to begin his journey of performing at The Blackstone in November.

“I’m primarily a jazz/improvised music pianist, but I also produce classical, Latin jazz, jazz fusion and hip-hop,” Pretel said. “Teachers [at Columbia] prepare us for the real world, so it will be a learning experience that I will take into the future.

Giacotto is excited to continue to strengthen Blackstone’s relationship with Columbia.

“I would love nothing more than to do something one day to expand our collaboration with Columbia,” said Giacotto. “We’re not cookie-cutter, it’s fun, it’s artistic, and we support the community and the students.”

Columbia students and alumni perform in the lobby of the Blackstone Hotel every Thursday, Friday, and Saturday from 5:30 p.m. to 8:30 p.m.

To support these Colombian musicians, listen Trimble enabled Spotify and Apple MusicStewart on Youtube and Pretel on Youtube.