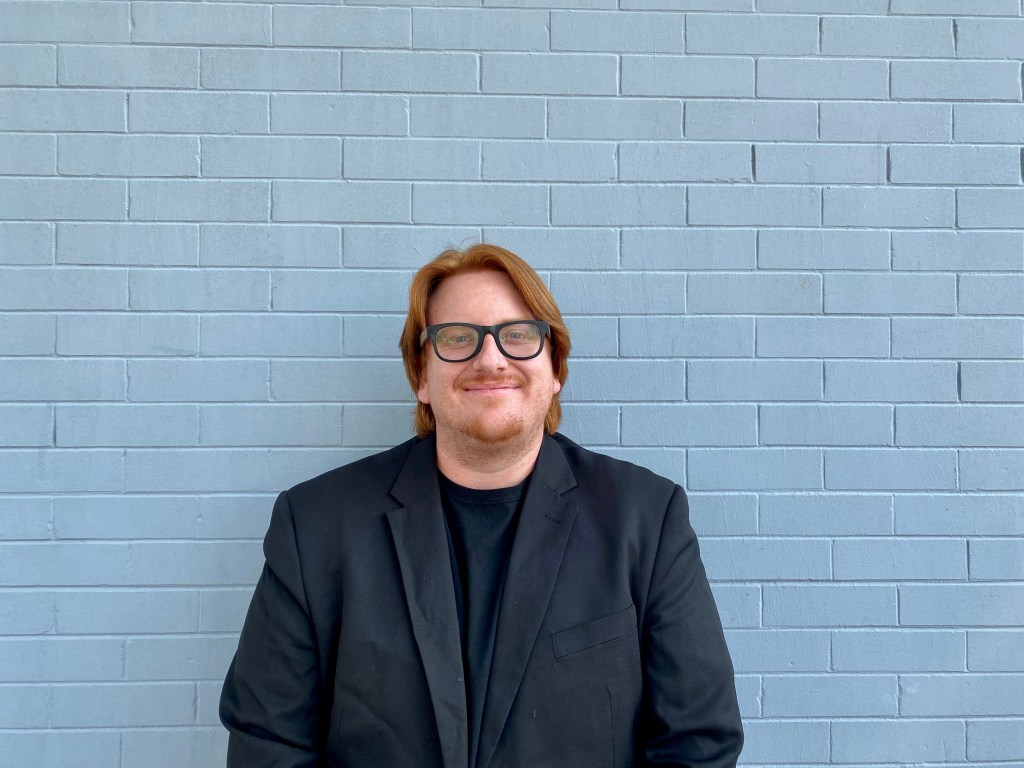 Philosophical and yet fully self-aware, Matt Gordon is a breath of fresh air in an often stifling political world. His passion for people and learning is immediately felt when speaking with him and his desire to constantly find ways to improve is admirable.

Gordon was recently hired as the Executive Director and Main Street Director of the Brush Area Chamber of Commerce, but his journey to this role has been far from conventional.

Although he may have been an average college student, Matt got busy with extracurricular activities, such as an orchestra, wind ensemble, and playing in a seven-piece band called the Thunderdome. He also worked full time during his junior and senior years at KFC.

As Gordon navigated through high school, it turned out that he had several teachers who were able to influence his path and influence his career trajectory. During his junior and senior years, he had the opportunity to teach a professor named Kevin Kelley, which inspired him to study political science at university.

â€œThe more I interacted with him, the more everything clicked,â€ Gordon said.

Gordon also had a professor named Jill Goekoen who showed him the world of philosophy, which would later become his minor. But, in the end, it was the music that guided his time as a young adult and will teach him the highs of success and the lows of failure.

“My dream was to be a famous musician on a world tour, but of course my parents were adamant that I would go to college no matter what I wanted to do in life,” he said. he declares.

He applied to various schools and ended up accepting a place at Metropolitan State University in Denver where he would work to earn a degree in political science with a minor in philosophy.

â€œMy mom motivated me to go to college was one of the best things,â€ he said.

He has been actively involved in several groups on campus, including Model UN, Model African League and Model Arab League. The college provided Gordon with a space to express himself and to find other like-minded people who may not have met conventional standards.

Through his political science teachers, he discovered that he had caught his own pace and fell in love with government and politics. In particular, Gordon has found an interest in the serious side of government and in particular local governments.

Gordon was also working full time while attending school and despite breaking up from his high school band he formed a new band called Purple Coffin. This new group gave him the platform to diversify musically and to really have his own group.

â€œI learned on my own to sing and play guitar and audio engineering,â€ he said. â€œAll the right skills to know to play in a group. We started playing and had a lot of success in Colorado. We played about fifty shows. I learned a lot from my failures with my previous group and I was able to improve myself.

Throughout the music, Gordon also acquired longtime friends and relationships that are dear to him still. He enjoys collaborating and learning from others. His best friend Aaron Shaffer, with whom he started Purple Coffin, would be by his side through many ups and downs over the years.

“I had much better grades than in high school and I found that I excelled in an environment where it was up to me to be successful and to do it,” he said of his time at the university. â€œI fell in love with writing during this time and worked to improve my analytical skills. “

Once Gordon got his bachelor’s degree, he was confronted with the idea of â€‹â€‹the sequel. He struggled to find work after graduation in 2012, after the recession ended. Eventually, he was hired by for-profit College America to teach GED preparation.

Finding no inspiration in this role, Gordon decided in 2013 to return to school for his Masters in Political Science with a specialization in US government. He attended the University of Colorado at Denver where he would earn all of his credits except for a course and a thesis before deciding to move to Los Angeles and pursue music.

While studying at the University of Colorado in Denver, Gordon had the opportunity to study abroad for a month in South Korea to study globalization and the economies of the Asia-Pacific. He was captivated by everything he learned during his stay.

â€œIt was one of the most transformative amazing months of my life,â€ he said.

During this trip, Gordon was traveling on the subway to meet up with friends when he ran into two guys playing. One had a keyboard and another played guitar and Gordon started singing in the crowd. It didn’t take long before people noticed him and he was drawn into the show as a singer.

The following weekend, Gordon was invited to perform with them at another subway station where they ended up performing in front of around 500 people.

â€œI was absolutely surrounded and at that moment I realized that I didn’t need to be in school anymore; I need to make music, â€he said. â€œI want to make sure that I live my life with a minimum of regret so Aaron and I have agreed to move to LA and pursue a career there. When you find the things that affect you the most, it’s important to chase them away. “

LA is not for the faint of heart and Gordon was quickly immersed in a world where many artists try to do it but few find fame. However, it was through this experience that he was able to continue to grow personally.

â€œWe both tried,â€ he said of his move to LA. “We wrote a lot of songs and met a lot of great people.”

In the end, neither Matt nor Aaron found the fame they hoped for and returned to Colorado. By this time Gordon had returned to live with his parents and was trying to find a new job there. Tony Robinson, the then president of political science at the University of Colorado at Denver learned that Gordon was back and decided to contact him.

Robinson informed Gordon of a program offered at the college called the Department of Local Affairs Best and Brightest Internship and asked him to apply.

â€œYou have to get involved in this, but you have to want to,â€ Gordan recalls, telling him about the internship. â€œI interviewed 70 students from across the state and had the opportunity to interview seven cities and my first city was with Brush. Loranda Packard, Karen Schminke and Greg Etel from the regional affairs ministry for that region were at the meeting and I seemed to really sympathize with these three.

Gordon was excited at the prospect of being involved in a place where he could really make a difference. He ended up being selected for three cities and chose Brush.

â€œBrush seemed like where I knew I could make the most connections and see the most opportunities,â€ he said.

Gordon hoped that by selecting Brush, he would have the opportunity to have a new experience in a place unlike any other he had ever been. He wanted to see if he could connect with the people of Brush and in doing so create success, not only for himself, but for the community.

He accepted the two-year internship position at Brush and he thrived. Not only did the city challenge him, they gave him the freedom to try new ideas. He worked with Police Chief Derek Bos on an emergency business continuity plan. He also studied the effects of COVID on local government and used it for his master’s thesis.

â€œThis two-year internship was a career rebirth,â€ he said. â€œI love to think of things that no other person would do and during this internship I found that Brush was open to my crazy ideas and that spoke volumes to me. Being at Brush was the rebirth of absolute career that I needed to focus on.

Gordon completed his internship in 2020 amid the COVID-19 pandemic. He found it challenging but also very informative to work with the city during this unique time. While he would have loved to stay in Brush, he was offered the opportunity to become City Clerk and Treasurer in Green Mountain Falls.

â€œI got hired and managed a $ 1.6 million budget and learned the ins and outs of everyday government work,â€ he said. â€œI wouldn’t have been ready for this job if I hadn’t done this job first. I learned a ton and Green Mountain Falls was transformative as well. It gave me a good picture of what I can and cannot do and how I can be a leader. I didn’t really expect to be here, but I really appreciate this opportunity.

Gordon would eventually quit his post at Green Mountain Falls after eight months amid tensions within the community and their ultimate distrust of government in general. He gave a speech in front of the city after his decision to leave Green Mountain Falls and, to his surprise, his speech was much larger than he could have imagined.

â€œIt made me realize that people are listening and the things you say will follow you,â€ Gordon said. “The most important thing is that I am not going to lie and if it sucks to hear the truth then at least we can work to make things better.”

Gordon eventually learned that the position of General Manager / Main Street Manager of the Chamber of Commerce’s Brush area was available and he quickly applied.

â€œI got the job and I cried,â€ he said. â€œI felt like I was coming home. I just finished my first week on the job and it’s heartwarming to feel that people want me to come back and in a leadership role nonetheless.

Gordon had his first day on the job at Brush on Monday, September 13, and his excitement to be back and work for the citizens of Brush is palpable.

â€œI take my job very seriously,â€ he said. â€œI want us to be successful. There aren’t a lot of places you can go in the world that you can go and come back and they are more excited to see you come back. I’m so lucky and have to thank Tony Robison and his wife because if they hadn’t heard that I was living with my parents and encouraged me to do this brightest and brightest internship I wouldn’t be here where I am today.

Gordon has had quite the way he is now in his career, but he appreciates the nuances of his journey and the incredible life lessons he has learned along the way.

â€œLeadership roles can come from non-traditional paths and I am the definition of non-traditional paths,â€ he said. â€œSometimes it will be difficult and you will meet with failures, but if you continue to be passionate people will feed off of it and can share that enthusiasm. I consider my chamber work to be my art and I am very passionate about the things I create.

â€œI love going there,â€ he said. â€œIf there’s an opportunity to swing for the fences, I’ll swing. It’s about going forward and being honest and genuine.

Gordon looks forward to settling into his new role in the chamber and working with the Town of Brush to continue to make an impact and help them succeed for the town and its citizens.