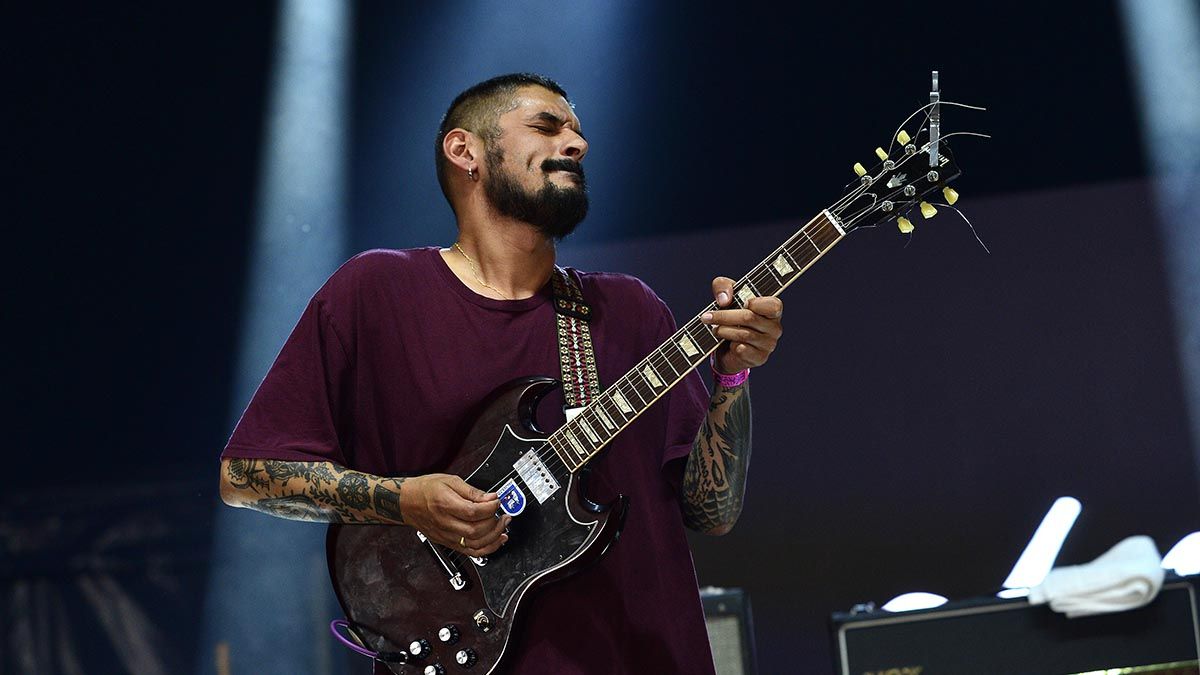 Dry Cleaning’s Tom Dowse: “I play all day and it’s a big part of my life, but I just can’t think of myself as a guitarist!”

Dry Cleaning may be part of the new wave of British post-punk, but they sound quite unlike any of their contemporaries.

Led by Florence Shaw’s spoken-word vocals, which span the everyday to the profound, debut album New Long Leg is also notable for the expansive, dynamic guitar playing of Tom Dowse, who strikes and caresses his Gibson SG in equal measure.

Here, he shares his tips for standing apart from the crowd as a guitarist – that is, at least, if you even consider yourself a guitarist…

“I just gravitated towards SGs when I was a kid, just the shape of them looked the most metal. I’m a huge fan of Greg Sage from The Wipers. He played an SG with a Bigsby, and when he was strumming he was always bending the Bigsby as well, so he had this really warped sound.

“That’s something I do with the SG a lot. I like to bend the neck. I treat it quite badly to be honest. I switched from a Silvertone 1478 back to my SG again and it was so much more indistinct, almost like an ocean. There’s more space for the texture and weirdness I was going for.”

“I’ve got a Burns Double Six which I really like playing. I’m a bit addicted to 12-string guitars. If I had the money, I’d start collecting 12-strings. I have a Roland JC-30 amp with built-in chorus, and sometimes I have a chorus pedal as well as the chorus on the amp so it’s really crazy. That’s one of the reasons I like 12-strings – it’s like natural chorus.”

Harness the power of improvisation

“We write by jamming. When we listen back to the jam, there’ll be something interesting in there. The song Leafy – we literally improvised that. It was a seven minute jam and what you hear on the album [New Long Leg] is a three-minute section of that, even down to the lyrics. It came out one time and just worked.”

“I don’t really think of myself as a guitarist. I play all day and I love it, it’s a big part of my life, but I just can’t think of myself as one because I’ve never been interested in being technically any good! I’ve just tried to find my own language. I’ve always gravitated towards guitarists that sound a bit more abstract. I quite like not knowing too much about the guitar so it’s always exciting.”

“I don’t really know the names of chords. I naturally made my own path, not because I wanted to do something different, just because I’m not very good at learning technical things. I never really learned other people’s songs or looked at tabs. Use your ears instead of looking at a tab because then you’ll end up with a bad version of that original thing, but maybe something good of your own.”

Make sure everyone in the band knows their job

“I think one of the reasons why we work quite well is because there isn’t really any overlap. It leaves a lot of room for me to do melody. When I’m jamming at home, I’m always looking for hooks, then that’s what I bring to practice. We all have distinct roles. Sometimes I’ll do the rhythm and Lewis [Maynard, bassist] does the melody, but we’re never all doing the same thing.”

Don’t worry about other people’s opinions of your gear

“I’ve got a Fender [Hot Rod] DeVille 4×10. Most sophisticated sound people are horrified when they see that. as soon as [producer] John Parish saw it, he just shook his head, like, ‘Oh no, not that again!’ I really like them. I play live with the DeVille and an AC30, with a different chorus pedal on each.

“One is a Boss CE-5, the one people don’t like. The good thing about the CE-5 is you can set the lower and higher frequencies separately. When I’m doing something lower down and more rhythmic you don’t get a lot of chorus, then if I want to go higher up it’s much more apparent.”

Learn your gear inside out

“When I first started using the Z.Vex Fuzz Factory I had loads of problems. It was just unplayable at times. We have an understanding of each other now. On the record, I turned the gate right up at one point and just had it screaming. It’s really cool if you have it really hard gated so you get these really weird crunchy noises.

“I don’t put anything on the pedalboard unless I know it really well. With the Fuzz Factory, I know what not to do. You have red zones you just don’t go in. Everything else I like to vary depending on the feel of the night.”

“I think it’s interesting to build influences in from other genres. When you get that balance right, you end up with something quite interesting. Unsmart Lady was me trying to do a Dry Cleaning version of a metal song. It doesn’t sound like that, but that’s what’s cool about building in these different influences.”

Master piano, guitar, and musical creativity with this eight-lesson package for just $34