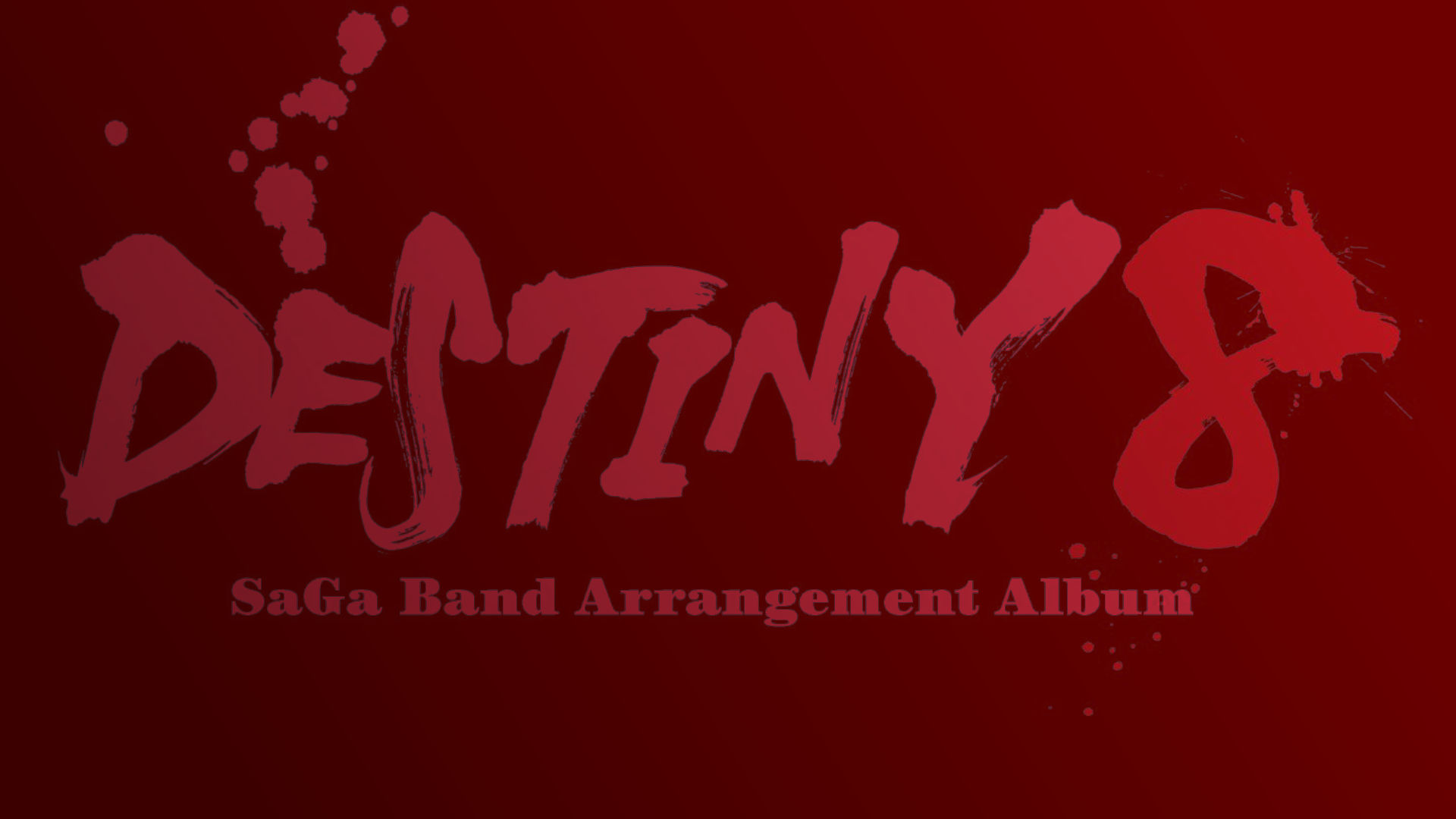 After some re: birth and re: tune, it looks like Square Enix Music has decided to “rename” their band-style arrangements with a whole new set of Saga group arrangement albums in the form of DESTINY 8.

Much like The Black Mages and The Primals, DESTINY 8 is a rock band that targets a specific franchise. With a total of six musicians, with arrangements by the talented Noriyuki Kamikura, there is a lot to love about this outfit. Not only is Kamikura on the keyboard, but he’s joined by series composer Kenji Ito. The guitarists seem to be newcomers (Sorao Mori, Zenya Sakata), as does bassist Harunosuke Ikejiri. But the drummer? Longtime fans of Kamikura’s other projects will recognize the sounds of Toshiharu Okajima, who worked alongside Kamikura for almost a decade on Falcom projects (jdk Band and Zanmai albums).

While I was excited to get my hands on the latest Saga Group arrangements album, I had doubts about DESTINY 8 as a project. After all, with three solid albums in the re: birth series, the franchise’s battle themes seem to have run out of rock arrangements. And, indeed, a quick comparison of the tracklist shows that the majority of the tracks on this album have received the rock treatment over the past decade.

The difference on this Saga Group arrangements album? More cohesive and unified sound. This may not be enough to appeal to those who already have the re: birth albums in their library, but newcomers to the glorious Saga The soundscape can be conquered with powerful arrangements like â€œEnraged Battleâ€. This particular track, the boss fight music of The Legend of Final Fantasy (aka the first Saga entry for Game Boy), also features a musical cameo with the creator’s theme serving as a bridge. This particular arrangement is also the only one in recent memory to attempt to capture the frenetic energy of the original synth’s 32nd note swirls in the B section of the song.

Other notable arrangements include â€œThemaâ€ and â€œFeldschlacht Iâ€ by SaGa Frontier 2. The first is one of two slow tracks on the album, with the keyboard switching to a flute synth and the guitars switching to acoustic. As for SF2 Standard battle theme, DESTINY 8 does a great job of respecting composer Masashi Hamauzu’s original vision with the dual keyboards taking on the heavy synth while the guitars pick up (and, at times, coincide with the keyboard) the fantastic melody.

One last surprise I’m going to jump on is â€œEncounter with the Seven Heroesâ€ by Romance SaGa 2. The notable addition here is the crisp chorus synth scattered throughout the piece. The resulting â€œrockestralâ€ sound is unlike any other arrangement of this classic tune.

Even as I’m writing this review, I have the second volume of DESTINY 8 sitting on my desk next to me, recorded and released within six months. Saga Group arrangements album. Oddly enough, while its track list contains music from less popular tracks (Unlimited SaGa, Imperial SaGa), it also seems to skip the first Romance SaGa (and its extended OST Minstrel song redo). This is perhaps the strangest oversight of the two albums, especially since the music in this game is fundamental to Kenji Ito’s discography in the franchise.

Although I’m not too impressed or excited about DESTINY 8 Saga Group arrangements album, there’s enough here to keep me excited about Vol. 2. If you’re keen to buy this one, it looks like Square Enix Music is currently only offering it for sale (physical and digital) through Japanese retail outlets. All I really want from this new band, if I’m being honest with myself, is a live gig. Considering what Square Enix Music has done with big shows like Octopath Traveler Break, Boost and beyond!, I have every reason to believe that something special could happen if DESTINY 8 took their music on stage.