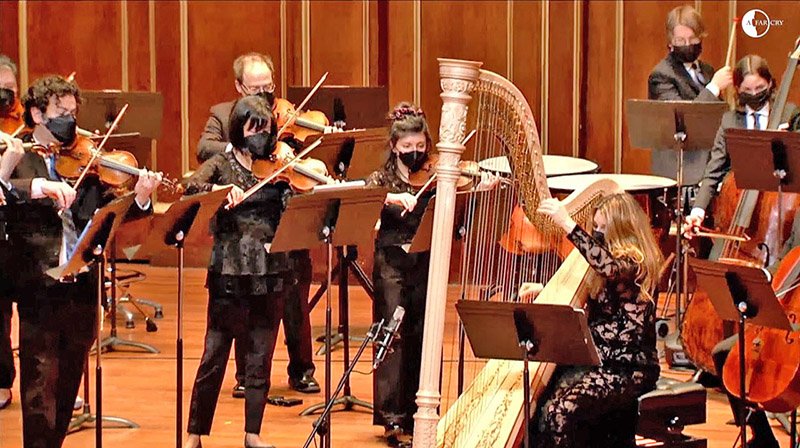 From NEC’s Jordan Hall, A Far Cry traveled 3,000 virtual miles south to the heart of South America for “Amazonia,” featuring composers from the namesake basin. Vibrant, virtuoso and completely unexpected, the concert once again demonstrated the adventurous programming of the Criers.

Gabriela Lena Frank wrote Leyendas: an Andean walk (2001) in a semi-autobiographical vein. This six-movement work, in Frank’s words, “blends elements of classical Western and Andean folk musical traditions.” Each movement, each one makes it a miniature symphonic poem, is inspired by a different South American idiom or instrument. The first evokes the pan flute with a gentle series of ostinato rhythms. The second is a vigorous evocation of the tarkalisten), a “heavy wooden flute that is blown hard in order to split the tone”. Frank evokes these split tones with sharp dissonances. Below, a fiery melody undergoes a series of transformations before ending in a plaintive cry.

The third movement, “Himno de Zampoñas,” depicts a rattling panpipe ensemble with shimmering counterpoint. “Chasqui” orchestrates the movements of the eponymous Inca messenger-runner. Frank lets loose with a jubilant melody resembling a joyous flight through mountainous terrain. The fifth movement, “Canto de Velorio”, is an evocation of the llorona, or a “crying professional woman”. The movement begins in a melancholy atmosphere but, as the title indicates, Frank imitates the lloronathrough a tragic apotheosis and a disturbing denouement. Legends ends with “Coqueteos”, a charming serenade. Frank imbues this “flirtatious love song”, a style traditionally sung by romanceroswith lush harmonies.

In his brief comments after Legends, Crier violinist Alex Fortes described how Frank sought to emulate the integration of folksong and classical forms completed by Béla Bartók through his extensive fieldwork in Eastern Europe. But instead of attempting a direct transcription à la Bartók or other ethnographer-composers like Colin McPhee, Frank mostly borrows moods and colors. In Legends, she creates a series of unique soundscapes that aptly blend two cultures, rather than subsuming one under the other. Frank’s songwriting skills shine, demonstrating his ability to use the string orchestra to conjure up a guitar one moment and a flute the next. In each movement, Frank provided the screamers with an abundance of technical challenges, striking dissonances that captured the sound of the tarka and the sobs of llorona to continual pizzicato and spiccato. But the whole has taken up all the tests with ease, offering a formidable and pleasant reading.

Pianist Erie Nakamura joined 11 string players for Jacqueline Nova’s 1965 Doce Moviles (Twelve Mobiles). While Nova, of Colombian origin, is today mainly known for her electro-acoustic experiments, Doce Moviles is entirely acoustic. Here, Nova loosely incorporates 12-tone techniques, creating a pointillist sound while avoiding the gloom inherent in most serial music. Nova attempts to orchestrate the course of a mobile by juxtaposing these groups of 12: dodecaphonic music in 12 movements interpreted by 12 musicians. As if reflecting the unpredictable movements of a mobile, Doce Moviles is a series of tiny fragments marked by snippets of melodic lines fractured and buried under dissonance. But out of the quagmire came the occasional gem, a timid solo melody backed by simple piano accompaniment. These patterns repeat regularly, in direct contradiction to the strictest interpretation of twelve-tone practices. Once the ears adjusted to Nova’s style, later moves even revealed a playful underlying rhythm. The final movement, with powerful string playing accompanied by rambunctious piano clusters, provided a zinger ending. Even so, it’s not a job for the faint-hearted.

Harpist Bridget Kibbey took the stage to present the Boston premiere of Recife, a concerto she commissioned from composer João Luiz. Kibbey had requested a work to be associated with a Bach harpsichord concerto, and in Recife, Luiz attempts to combine baroque counterpoint with the complex Brazilian rhythms of his childhood. Alternating between introspective interludes and dynamic dances, the first movement “Cortejo” – the opening act of Carnival – and the final movement, “Acrobático”, were aptly named, using the Maracatu and Frevo rhythms, respectively. But the star of the concerto was the second movement, “Mar calmo” (calm waters). A meditative evocation of, in Luiz’s words, “the transcendental beauty of Brazil’s northeast coast”, the soft plucking of the harp gave the piece a unique sound. Leaving Kibbey to play mostly arpeggiated accompaniments, Luiz spread floating solos throughout the orchestra.

In all three movements, Kibbey took vigorously cadence-like sections. An enchanting, jazzy second-movement solo was particularly poignant. Far Cry’s string and percussion orchestra, playing without a conductor, was more than just an accompaniment, becoming instead a nimble partner in Kibbey’s virtuoso harp performance. As Fortes explained, however, Recife has even deeper reverbs for the set. The hardwood used in almost all string bows comes from Pernambuco, a state that stretches inland from its coastal capital, Recife.

For something completely different, the Criers presented Andrew Roitstein’s arrangement of Hector Villa-Lobos’ classic “Alma Brasileira,” the fifth in his Choros (1920-1929). By Villa Lobos, choros are “always very sentimental” pieces played by chorões, or Brazilian street musicians. A lilting melody gave way to a dramatic climax, with a return to the original melancholy theme at the end. Originally written for solo piano, Roitstein’s arrangement brought out the lyrical qualities of the piece, made even more expressive without the percussive sounds of the keyboard.

A Far Cry finally freed up the South American beats that lay just below the surface of previous works. Mozart Camargo Guarnieri’s 1972 Three-Movement Concerto for Strings and Percussion described a rousing beginning, a thoughtful middle section, and a cheerful ending. The addition of drums gave a new sense of vitality to the ensemble, notably through a series of short percussive solos during the final movement. Throughout, accented chords marked a host of dance styles before a jig beat and dazzling violin cadenza brought the concert to a triumphant close.

In his stage commentary, Fortes mentioned that the ensemble’s deliberately heterogeneous musical selection, as they based the concert “…around the music of the countries that surround the Amazon Basin, one of the most diverse places in the fauna and flora in the world. “The Criers showcased the energy and vibrancy of the Amazon River and rainforest in this very enjoyable performance.

I attended this concert live. Video and sound, provided by Immersive Music Project, successfully brought the Criers’ performance into the house. The audio, courtesy of sound engineer Christopher Moretti, sounded crystal clear, while the video gently swept and skipped through the set. A 30-day digital video-on-demand event pass will be available for $20 after March 18and HERE.

Gareth Cordery, a second-year Ph.D. studying historical musicology at Columbia University, majoring in music and history at Middlebury College. He has performed piano concertos with symphonies across the United States and lives in New York.

Moxai, young group from North Devon, want to do a gig