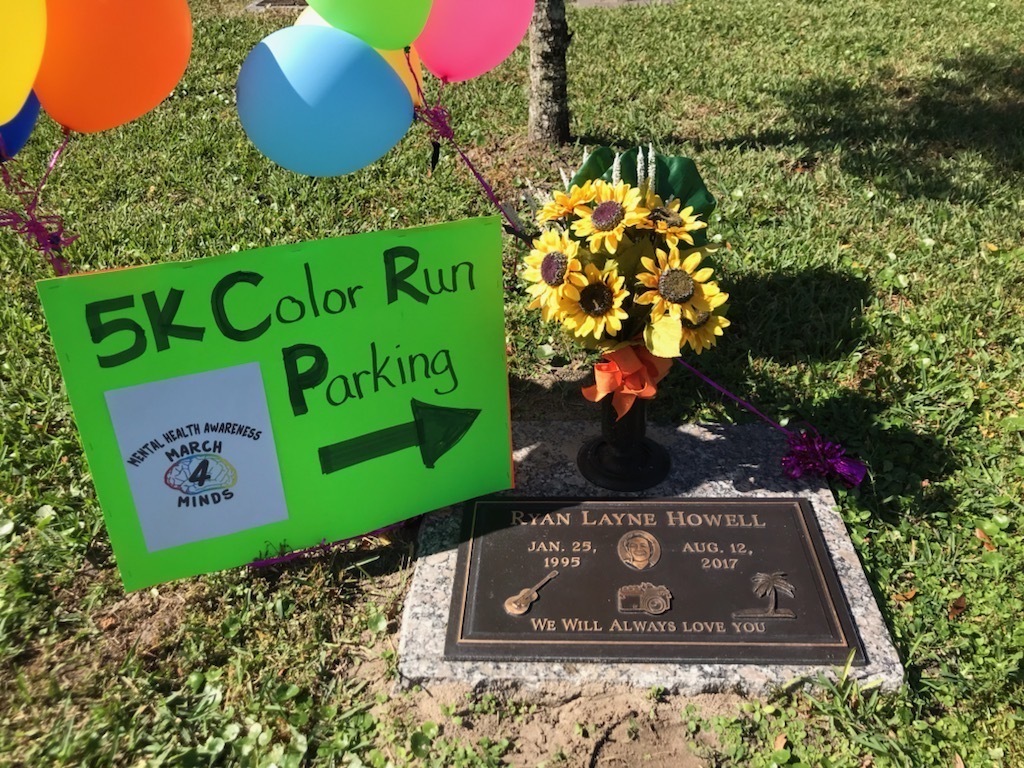 Editor’s Note: Please note that this story includes mention of suicide and its impact on a community. If you or someone you know is suicidal, you can reach the National Suicide Hotline at 800-273-8255.

Ryan Howell was an artist.

He learned to strum any tune on his guitar, no matter the genre, and he shared his music on his â€œShred of the Dayâ€ Facebook page. His drawings were featured in an exhibition at the Thomas Center in Gainesville, and he was voted “most artistic senior” by his peers at Gainesville High School. He twice enrolled at Santa Fe College to take additional art classes to develop his gifts.

He was a free spirit. With the spinning wheels of his long board beneath him, Howell’s long brown hair whipped and whirled in the wind. He wore bright colors and tropical prints.

At his memorial service, his family asked guests to do the same: wear a tropical shirt and khaki shorts.

Although her death was a tragedy for her parents and two sisters, they used their moment of darkness to inspire a change in the conversation about mental health. They started on Ryan Howell Memorial Scholarship, who donates directly to Prospects Integrated treatment and sober living, an Ocala-based addiction recovery treatment program. Four years later, the scholarship is still supporting the program, allowing the facility to expand its services and locations.

Inspired by the scholarship, Gainesville students showed their support for raising mental health awareness in memory of Howell.

Howell’s sister, Ellyn, now 20, and her friends who are members of the Distributive Education Clubs of America, or THIS SIDE, at the Entrepreneurship Academy at Buchholz High School decided to remember Howell in a way that reflects the light he brought to the world through a race of colors.

In 2018, she planned the first March4Minds 5K color run to support the Howell Stock Exchange. The event not only supports the community living facility where Ryan found a support system, but it also facilitates a conversation about mental health resources and suicide prevention.

Breaking the silence on mental health

Ryan’s mother Teresa Howell said her son struggled with schizophrenia and drug addiction for almost two years. She hopes that increased awareness will prompt others to seek help sooner.

â€œThis is our real message: the sooner they get help and treatment, the better,â€ she said. â€œThe first intervention we can possibly make is the one we are focusing our efforts on. “

After the inaugural 5K event, she received Facebook messages from families facing similar challenges and letters from Perspectives clients who said the help they received through the scholarship saved their lives.

â€œMaybe someone in such a sad and tragic situation is going to be helped by this project,â€ Howell said.

When Ryan was diagnosed with schizophrenia at age 21 while battling drug addiction, he was considered “doubly diagnosed.” Her family traveled across the country in 2016 seeking treatment in Texas, Georgia and Tennessee. The options for someone with a dual diagnosis were slim and expensive.

Later that year they found help in Gainesville; Perspectives Integrated Treatment and Sober Living was willing to serve a Ryan as one of their first dual diagnosis clients.

Blank said Ryan had moved into a sober living house, an independent community where individuals typically stay for six months and are guided by recovery coaches. Clients of the hostels can enter the workforce and continue to stay in Perspectives homes.

Blank said scholarship contributions would be used to sponsor people and achieve Prospects’ goal of never turning someone down due to lack of funding. In addition, the money can sponsor recreational activities or weekend trips.

Perspectives continues to expand its services, including a new ambulatory care facility it plans to open in Gainesville. While treating people with a dual diagnosis is not the program’s specialty, Blank is keen to provide treatment resources to as many people as possible.

â€œStaying positive is difficult because not everything we hear is always upbeat and pink clouds and unicorns,â€ he said. “So it’s important to give hope, and it’s also very important to remember that for some of us these people may have been us at one point or a family member.”

Running to recover. And the obstacles of 2020.

With the COVID-19 pandemic onset in 2020, the race for colors was not a sure possibility, and Howell said she believed it could mean the next class of CAED students would choose a different cause. to support. But Ellie Jones, Dillon Menefee and Sophia Butler decided to plan another chance for community members to cross the finish line.

Jones, 17, said she has known the Howell family since she was young. She remembers seeing them at mass on Christmas Eve in the Church of the Trinity, grouped together on a bench. After Ryan died, her family brought meals to the Howells front door and she competed in the March4Minds 2018 race.

Now a senior at Buchholz and vice president of hospitality at DECA, Jones has partnered with Menefee and Butler to carry on the tradition – and make it bigger than ever. Nearly 100 runners and 20 volunteers gathered on the morning of November 13th after nearly four months of planning and working with sponsors.

â€œNone of this has ever been a burden,â€ Jones said. “We were all very passionate about this, and one of our goals was to get more attendees than they ever had just because we know how much it means for the whole family.”

She added that the passion of young students makes her believe that Buchholz DECA will continue to support the scholarship after graduating this spring, and she hopes to see her peers raise positive conversations about mental health.

â€œI think people want to help, they just don’t know exactly how,â€ she said. “This event and all the outreach, I think it was a really good way for people to learn how you can get involved in a small way, and it can mean a lot.”

Butler, president of Buchholz DECA, said the event helped her see how the community – and her as an individual – can make a difference, even if it starts out small. The 17-year-old said a conversation with Howell and her fellow DECA executive members after the race was her favorite time to plan the event. Howell told the three students it was one of the best days it had been in a long time.

Advancing the Conversation on Adolescents and Mental Health.

â€œI think young adults and teens are certainly often dismissed when discussing their own mental health,â€ she said. â€œThere has to be a more open space to talk about it. People shouldn’t be ashamed of themselves.

Whether the race continues or not, Ryan’s legacy prevails. Howell remembers the time his daughter, Ellyn, went to Bagel Bakery, one of Ryan’s favorite places, to ask for a donation for the run.

“Do you remember my brother? She pleaded at the bakery. â€œHis name was Ryan.

“Oh my God, I know Ryan,” replied an employee. “What do you need? We’ll do anything.

A compassionate and communicative community can make a difference in the life of someone in difficulty, said Howell.

â€œPeople need to speak to people, whether it’s the children who speak to other children, to their families, to the teachers,â€ she said. â€œThese kids, we can’t expect them to know if this is something that is a phase or if it is a mental illness in its own right; they do not know. All they know is that they are in a difficult situation at a difficult time.

If you or a loved one is struggling with mental health issues or thoughts of suicide, please call the National Suicide Hotline at 800-273-8255 or visit https://nami.org/Home for resource information.