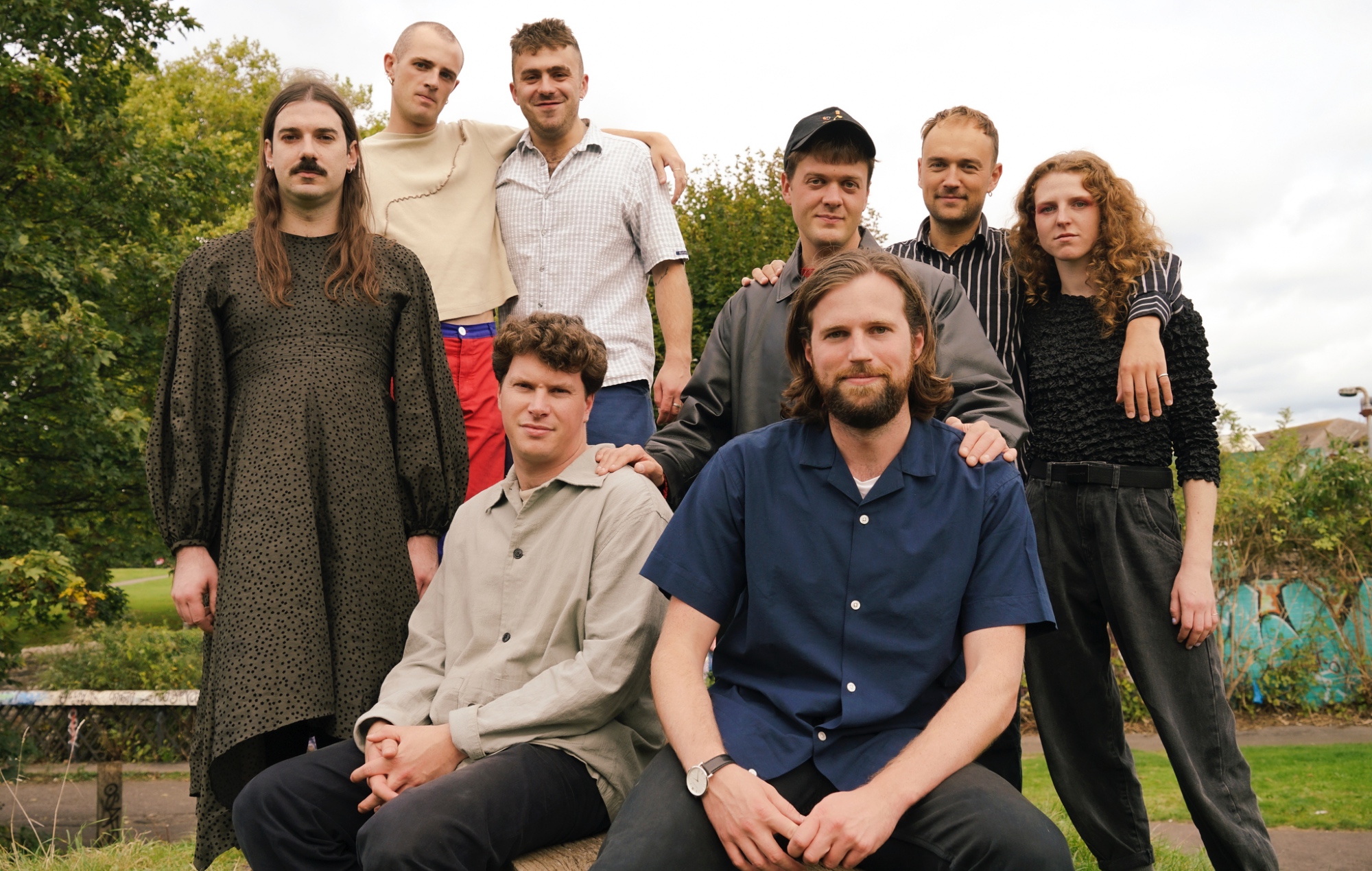 IIn a world spinning frantically out of control, Caroline makes music that forces you to slow down. The London-based eight-piece, whose self-titled debut album is out this Friday, February 25 on Rough Trade Records, creates patient, meticulously arranged music that will not only slow your heartbeat, but encourage you to listen closely and carefully; a soft arm around the shoulder to help you lean closer.

Stately guitars rise and fall over luxurious periods, much like the music of Tortoise or Slint, while strings swell and strum, while woodwinds and brass offer delicate texture and dramatic flourishes. It’s a sound that feels like it was made for our time, a unique, accessible and uncompromising hit from left field.

According to vocalist and multi-instrumentalist Jasper Llewellyn, the band’s sound isn’t something even they have much control over, that’s how it breaks down. “I guess we didn’t really set out to create any particular sounding music,” he said. NME. “We just played together and improvised, but it was never intended to do slow music or minimalist music.”

Caroline’s album comes at a time when discordant and experimental British guitar music is enjoying a rare moment of semi-mainstream acceptance, following the success of bands like Black Country, New Road and Black Midi, as well as the re-emergence of the post-rockers Mogwai, now a chart topping band. It should perhaps come as no surprise that in a time of domestic hardship and national political outrage, there is a window for groups offering cathartic release from anxious tension; Caroline certainly fits the bill.

Jhe band formed when Llewellyn and guitarist Casper Hughes, who had become friends while studying together at Manchester University, moved to London in 2017. They brought along mutual friend Mike O’Malley on guitar and within hours they found they had locked themselves into a musical bond that was paying off. At the end of their first session, they had written the track ‘Dark Blue’, which now appears as the opening track of their album. “This song is really a snapshot of the early stages of us as a unit,” O’Malley says. “It happened to be the first thing we ever did.”

Hughes and Llewellyn had played together in bands in Manchester, although of a very different genre, the former being lead singer and the latter on drums. “I was doing more talking and shouting stuff in those days,” says Hughes. “I guess it was a bit more of a post-punk style.” They were united by the love of the Ought group, but they now think of it as having only been a phase. “Everything changed, thankfully, when Mike came along, and it kind of evolved,” Hughes says.

While the three form the key core of the band’s songwriting, they are complemented by an assembly of accomplished musicians who each contribute significantly to the band’s output. The result is an aesthetic that manages to be scrupulously controlled while maintaining a sense of rough, rough DIY, an overall effect that didn’t happen by accident.

“There are moments of squealing intensity,” says Hughes, “that come from having a certain way of playing together in a loose, improvisational way. How these sections are placed in the song, however, is not willy-nilly. Everything is set up in a way that makes sense to us.

Although their music now defies easy categorization, the band is aware of the influences that have guided them to this point. For Llewellyn and O’Malley, traditional Appalachian folk music has been a constant source of inspiration, while Hughes points to Midwestern emo bands like American Football and Cursive as having fueled the Carolina sound.

vsaroline recorded most of her first album at the end of 2020, choosing to produce it herself. O’Malley is the only band member with significant production experience, having fronted Girl Ray’s debut album “Earl Grey” in 2017, but the band knew what they wanted from the recording process.

“Having this total control over how and where things are saved is really important to us,” says O’Malley. We like to use different techniques and atmospheres when we record, so having that kind of control was awesome.

An example of the techniques they implement is the idea of ​​”extreme closeness” on the track “IWR”. The guitar parts were recorded as quietly as possible, with the microphone placed a few millimeters from the strings and the gain brought to its maximum capacity. It gives the song a breathtaking human intimacy and a sense of drama that comes from hearing every minor imperfection amplified. This same freedom allowed them to record wherever they wanted. Recording spaces ranged from professional studios, to the upstairs room of their local pub, to inside a swimming pool, all adding to the eerie and unpredictable atmospheric depth of the album.

Lyrically, the album is laced with psychological darkness and self-doubt, like the voice of “Good Morning (Red)” screaming, “Can I be happy in this world / It will have to change, it does not suit us”. Llewellyn denies that the intention is to convey any measure of existential dread. “The mood of the meaning of the phrase should match the music,” he explains. “They are a layer like any instrumental part is a layer, and they bring their own qualities.” That may be true, but it surely speaks to the mood of the music, then, that such moody lines are becoming so prevalent.

Even in their live performances, they can’t help but do something innovative and deeply intimate. The band kicked off 2022 with one of the most unique shows in recent memory: an uninterrupted five-hour set at London’s Southbank Centre, where friends of the band joined them on stage intermittently and the public were invited to come and go. as they happy.

It turned out that the majority stayed for the duration, which is a testament to the versatile skills of the musicians. “We just wanted to do something totally different that would push us a bit,” Hughes says with a smile. It’s a sentiment that perfectly encapsulates Caroline’s refreshing, disruptive, and nonconforming story thus far, a story that even they can’t predict the next chapter for.

Radar Roundup: sign up and receive our weekly newsletter on new music