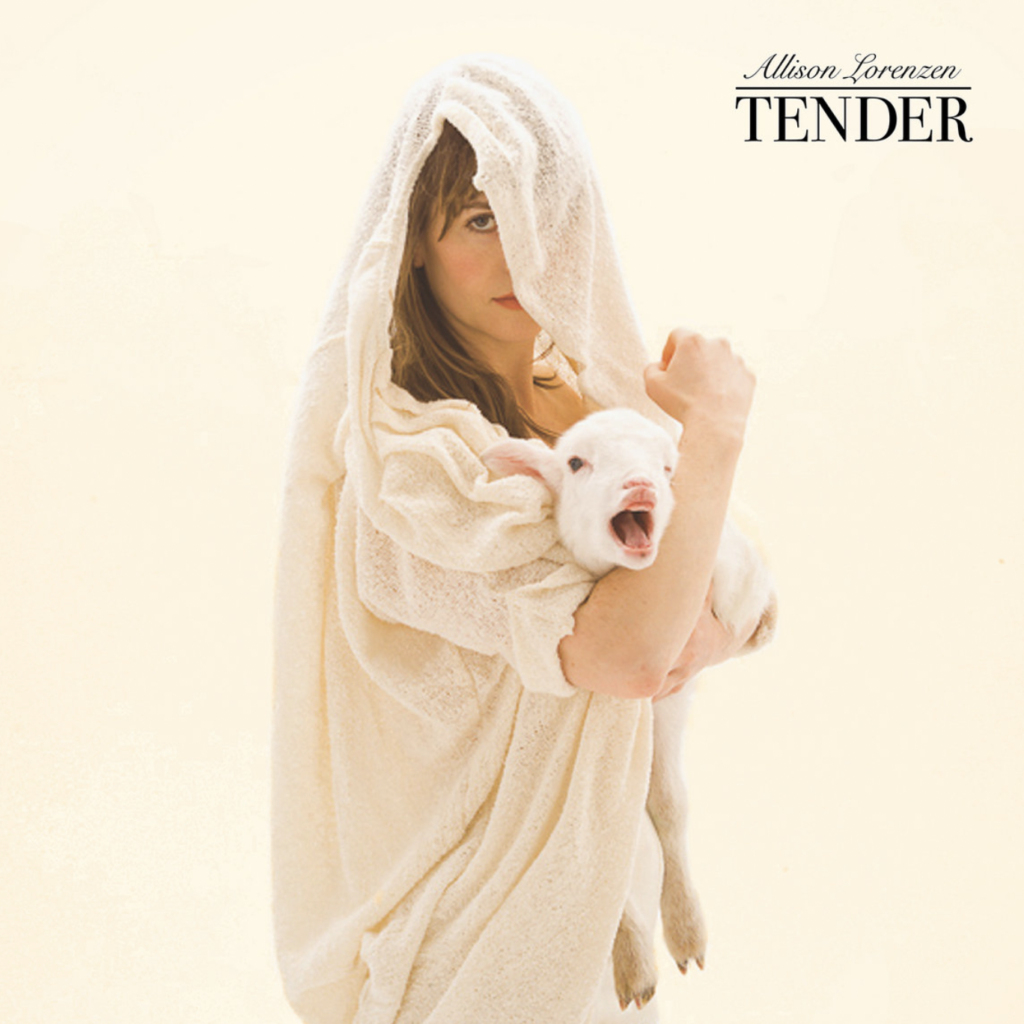 You haven’t heard it from me, but the noise down the street is that Colorado musician Allison Lorenzen loves her meat just like she loves her records: Tender. So with that in mind, it’s no surprise that she chose to go with Tender as the title of his new solo album, which was released online via Whited Sepulcher Records and is available on Spotify and Bandcamp Right Freaking Now!

This marks Allison’s official return to the music scene after a brief departure following the disbandment of her famous Philly-based dark-wave duo, School Dance. His whole approach this time around has been different, to say the least, but it all blends well into an album that itself is completely different compared to traditional Top 40 music. Opening track “Birds, A Chapel” is about feeling like a fish out of water and the reference serves perfectly as both a vulnerable introduction and an overarching metaphor for Allison’s very personal and thoughtful work.

In addition to the music itself which seems ethereal and moving throughout, it also creates a kind of space for intense reflection, and in a time when everyday everything feels heavy and calls for reflection, the album itself comes together. smells like home and maybe is just a bit of what we could all use. Whether the music grabs you personally or not, this type of fearless, independent expression should always be applauded as it reminds the rest of us that dreams are not just expected but rather constructed and constructed with our own hands.

To listen Tender it’s like driving in slow motion on a beach at dusk with your middle finger stretched out the window towards each of life’s many upheavals, disappointments or setbacks, and different things are like exploding behind you in the distance and they’re slow motion moving too, but you are too busy looking to the future and forgetting your past to notice or care about it. Eventually the track ends, and so does the album, so you find a place to have coffee and come home with your lessons learned and your wounds licked, ultimately deciding that maybe life is going to be okay after all.

Allison was kind enough to participate in a 7 hour Q&A on North Forty recently. It was intense, a lot of crying, a lot of screaming; If I’m being completely honest, very little has anything to do with the album, but the following is the best of this 7 hour Q&A session.

TNS: Where does the title come from? Tender comes from?

AL: I like that the word is nuanced and can range from an adjective – sensitive, affectionate, gentle to noun – medium of exchange or one who cares / cares. I was playing with Tender Shepherd as the name for my solo project and played a few gigs under that name before deciding to release music under my birth name, but I kept the Tender feeling for the album.

TNS: That’s a lot of “firsts” for you – seeing as it’s your first solo album and your first full album, but it’s also your first self-recording. Record your own album, which puts you high up there with David Bowie, Dave Grohl or Jonny Woodrose. It looks like that would be quite the business; Can you give us a bit of a background on what the registration process looked like exactly?

AL: It was quite a business and I learned so much along the way. Fortunately, I had gathered the necessary tools for a recording setup before the lockdown began. I also by chance ended up being in confinement with my childhood piano. I had a few remote meetings with friends who showed me the basics of recording and spent a lot of time researching recording techniques. For the most part, I recorded a skeleton of each song starting with piano and vocals, and built around them. My friend Dan Henry came from Philadelphia to add guitar and bass to most of the songs and Midwife contributed to “Chalk” and “Tentacles”.

TNS: I have seen positive reviews for your song “Vale” in Goldflake Paint, FLOOD Magazine, 303 Magazine and Various Small Flames. I know there was a team with Madeline Johnston from Midwife, but other than the teams, why do you personally think this particular song seemed to resonate with so many people and / or received so much attention?

AL: “Vale” was the first song I released in almost 5 years and the first since my old band, School Dance. I had some PR help to give the song the welcome party it was asking for. On the one hand, it’s an almost perfect song. On the other hand, I got help with public relations. So 6 dozen of one; half a dozen of the other.

TNS: I read in Westword that once upon a time you played in Denmark and Germany with a collective called Live Art Installations. The article explained how this experience helped you understand the relationship between choreography and movement in compositions. Would you like to further explain the correlation you find between physical movement and musical writing?

AL: The creative energy I feel while dancing is the same creative energy I get from music. Movement is an integral part of life and is everywhere. Allowing and revealing movement in a song is part of the job of songwriting. I think a lot of musicians create their music with a certain level of awareness of how bodies might interpret it. For me, dance is like language, and the work I have done in this area has provided me with a vocabulary that allows me (the opportunity) to articulate and express in a way that I don’t. perhaps could not have done otherwise.

TNS: Much of the album feels reflective in the sense that a lot of the songs seem to be looking to the past and asking questions or coming up with accomplishments, am I wrong? What were the inspirations behind the overall vibe or feel of the album?

AL: Much of the album is self-reflective and examines relationships and past experiences with the overall goal of growth and wholeness. Although many songs seem to be outward looking, they inevitably refer to my relationship with myself, which is at the heart. Not all songs are about relationship, however. For example, I wrote “Tentacles” in 2014 after watching Alien for the first time, and the second line refers to an experience I had when I was 3, chasing a kitten down an alley. In a way, my music is an expression of myself dealing with moments in my relationships with others or with society; sometimes feeling disillusioned and hopeless and other times overwhelmed with fear in moments of sweetness.

TNS: Okay, more softball; these are the most difficult questions. If you were stranded on a desert island and could only take one song from this album with you, which one do you think it would be and why?

AL: “Chalk.” How are we not stranded on a desert island.

AL: It was not; at least not in the literal sense.

TNS: Your song “Chalk” I guess after watching the clip on NPR is about the great American chalk shortage during the Civil War when dozens of teachers across the country had to resort to writing on blackboards. in their own blood, is that correct? If not, can you explain what the song is In regards to? Also, who made the video?

AL: The video was produced by Jack Manzi of Silver Island Studios. I would like to invite and encourage the listener to have their own experience of the meaning of the song, especially with “Chalk”. There is certainly an element of haunted meadow aesthetic and bloody implicit blackboards to the video.

TNS: You had your official release on December 4the at the Fort Greene Bar in Denver with special guests Midwife and Bluebook at 7 p.m. In three words or less, why this place and why these special guests AND why this time ?!

Make sure to follow Allison on social media, more appropriate than following her in real life!

Show your support for local journalism by helping us do more. It’s a kind and simple gesture that will help us keep telling you stories like this.